Dan Savage: "It was going to be a joke"

Before he redefined Santorum and changed the way we talk about sex, Savage reimagined the advice column 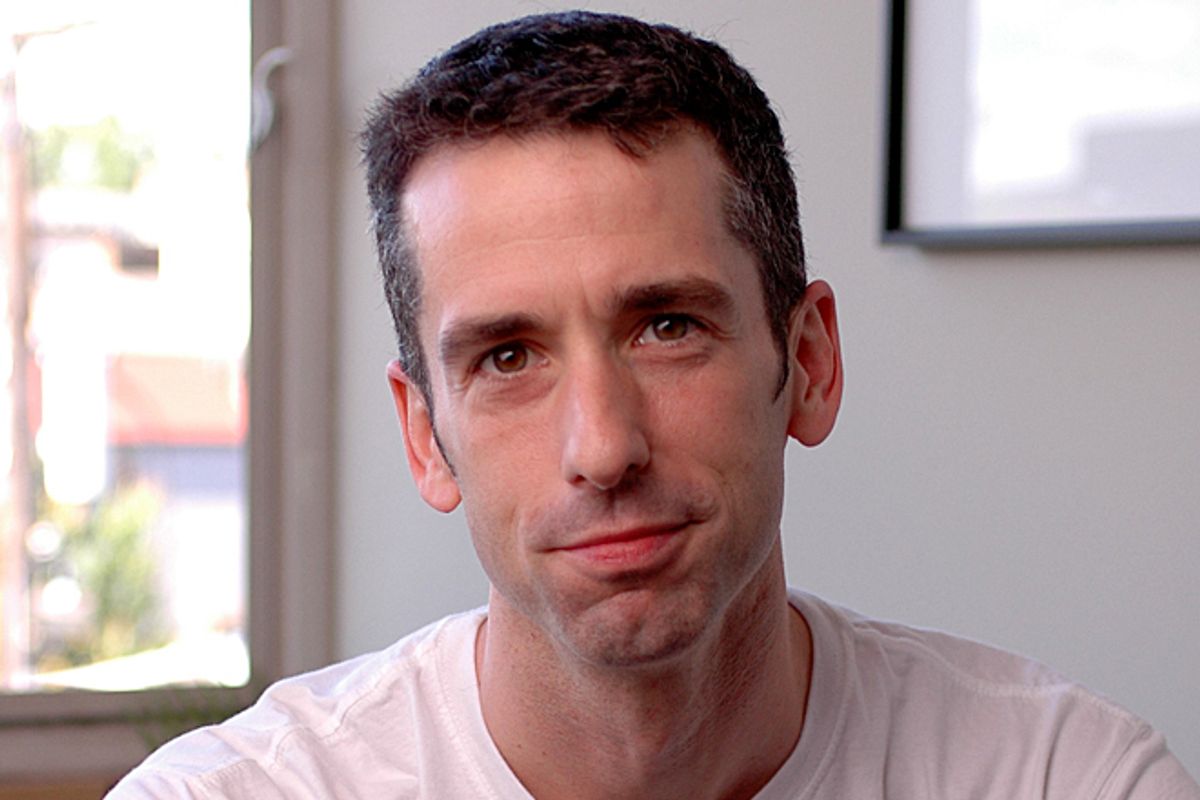 Dan Savage is a public-radio personality, a leading anti-bullying activist, a star of MTV and a prominent tormentor of Republicans. But in the beginning he was a sex columnist. His column "Savage Love" made its debut in the first issue of the Stranger, the Seattle alt-weekly, on Sept. 23, 1991, and soon would change the world of sex advice — a world dominated, at the time, by the relatively timid Dr. Ruth and the once-popular “Ask Isadora.” Now that "Savage Love" is over 20 years old, it’s worth looking back at what the self-described "faggot from Seattle" has wrought.

“At the beginning, it was going to be a joke,” Savage tells me, when I visit him in Seattle. Our day-long conversation has moved from his office at the Stranger, where he sits at Ann Landers’ old desk, which he bought at auction, to the cafe in the back of the Elliott Bay Book Co., a Seattle institution where other customers nod at Savage hopefully, hoping he will recognize them. “We weren’t getting paid. I was going to do this as a lark for a few months then move back to Berlin” — where he had been living with his boyfriend. In the first column, the readers’ letters were written by colleagues at the Stranger, and they all began with the jokey address “Hey, faggot.” That was the last time fellow staffers had to write the letters; soon there was steady mail from readers, who picked up on Savage’s preferred salutation.

Until 1999, when Savage retired the joke, “Hey, faggot” was the standard invocation at the head of every letter to "Savage Love." But "Savage Love" was never just about gayness, much less aimed only at fellow gays. In the beginning, it was not meant for them at all. “The idea,” Savage says, “was it was going to be a joke advice column that treated straight people with the same contempt for heterosexual sex and revulsion that straight people always treated the idea of gay sex with.”

But then the unexpected happened. “These letters started coming in,” Savage says. “Real questions from real people. Straight people started responding to me.” All of a sudden, Savage — "I had never written anything before in my life,” he recalls — had to develop a voice, a style, a message, an ethic. He had to learn to give advice.

At that point in the history of popular sex advice, the field was dominated by two women: Ruth “Dr. Ruth” Westheimer and Isadora “Ask Isadora” Alman. Dr. Ruth, a Holocaust survivor, combat veteran of the 1948 Israeli war for independence, and alumna of the Sorbonne, had become a little famous hosting a New York-based nighttime radio show, "Sexually Speaking," then very famous after David Letterman discovered that she made a hell of a guest. Audiences loved this diminutive sage with the Euro-shrink voice. Dr. Ruth’s German accent was both psychoanalytic — the Times called it “an accent only a psychologist could have” — and grandmaternal; it promised a stern talking-to followed by a bosomy hug. The voice was imitated by Morning Zoo drive-time radio jocks across the country; the shtick of an immigrant bubbe giggling about sex toys never seemed to get old. Isadora was a bit more sober — you could tell from the picture that ran with her newspaper column — but like Dr. Ruth she was a therapist with a radio show and a newspaper column. Her San Francisco Bay Guardian column ran at various times in three dozen newspapers, many of them alt-weeklies that would eventually replace her with Savage.

There is nothing wrong with Dr. Ruth or Isadora. Like Regis Philbin, or Letterman character Larry “Bud” Melman, Dr. Ruth is a genuine television talent. It was impossible to look away, or to shut one’s ears: her voice lives on in the soundscape of the collective American showbiz unconscious, like Jimmy Stewart’s or Ethel Merman’s or Woody Allen’s. And both women know their stuff: Theirs were the radio shows and columns that launched a million clitoral orgasms. They were reliable guides to the electrical wiring and mechanics of sex. But if they loved sex, they loved safe sex, safe in every way. Dr. Ruth’s radio show was owned by NBC, after all. She did not take live callers; she read questions from letters she had received — much safer that way. Gay sex was mostly absent from Dr. Ruth’s world. For straights, she would talk vibrators — but not dungeons, S/M, water sports. She purveyed a “Go get yours!” girl empowerment that would have been brave for the 1970s and was still refreshing for the 1980s. It was not for the 1990s. She could recently be found co-teaching, with the campus rabbi, a class at Yale on the Jewish family.

Isadora, whom I grew up reading in the Valley Advocate, the alt-weekly for western Massachusetts, was measured and reassuring: “‘Premature,’ like ‘sexy’ or ‘boring,’ is a highly personal judgment call,” she wrote in a column collected in her book "Ask Isadora," published in 1991, the year "Savage Love" debuted. “Whether we’re counting in seconds, minutes, or hours, if an ejaculation occurs sooner than a man or his partner would like, if its arrival is greeted with ‘Ooops!’ rather than ‘Ahhh’ by either party, then that might be considered premature.”

Measured and reassuring are good traits for a columnist, but not sufficient traits for a great columnist. Savage was a great columnist, great in a way that horrified the relatively antiseptic Alman (who would not speak on the record about Savage). “When my column got picked up in San Francisco,” Savage says, “Isadora Alman and the Gay and Lesbian Alliance Against Defamation tried to get it taken out, called it a hate crime. Isadora Alman tried to knife me. She loathed me. She called me the Howard Stern of sex advice, and I was like, ‘Yeah, that’s hardly an insult.’” Savage shared Stern’s preoccupations: He was speaking to the trannies, the intersexed, the polyamorists, or even just the straight people who had embarrassing questions demanding raw answers.

And if any profession needed a Howard Stern, it was sex advice. What the world got was a brave, fabulous, unblushing, gay Howard Stern. It makes sense, looking back, that the great sex columnist would be a gay man who grew up in the 1970s. (Savage came out in 1981, “into the buzzsaw of the AIDS crisis,” he says. He is lucky to be alive.) Savage was part of a generation of gay men who knew gay culture — the bathhouses, the party circuit, the drugs, the backrooms at bars — before the possibility of straight-style domesticity, with husbands and kids and tolerant neighbors. An urban gay man his age knew wild boys and some freaky fetishists; even if, like Savage, he was a pretty tame fellow, it was going to take a lot to shock him. At the same time, a gay man coming out in the early 1980s was going to take safe sex very seriously, along with the whole menu of sexual activities besides intercourse.

But they also asked about relationships, in searching, confessional letters unlike anything Americans thought to send Dr. Ruth. Perhaps it was because the column was called "Savage Love," although the irresistible pun on Savage’s last name did not necessarily dictate anything about the column’s content: It could have been just blow jobs and hand jobs and tips on shopping for lubricant. I think it is more likely that people asked about love because for most of us — those who do not live in a popper- and Ecstasy-fueled demimonde of all-night raves, or in the vampire/corset subculture — the most intimate sex questions come up when we are with somebody we care about. For most couples, role-playing or bondage is an activity that comes at month six, or year six, not on the third date.

In other words, savage sex goes with savage love. To combine those two human experiences in one column — that was Dan Savage’s great innovation.

Excerpted from "Dan Savage: The First Gay Celebrity," a new e-book by Mark Oppenheimer which can be purchased here.