Han Han: I had to break my Twitter obsession 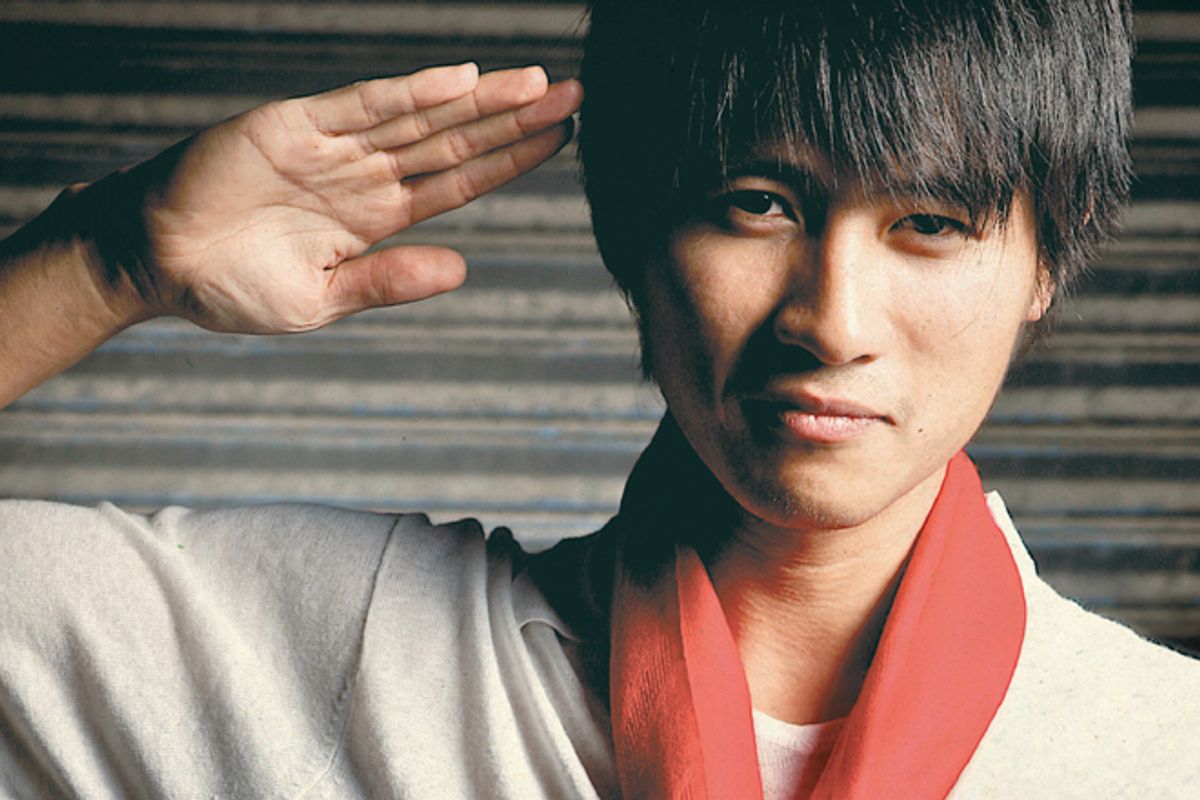 Excerpted from "This Generation: Dispatches from China's Most Popular Literary Star (and Race Car Driver)"

I have been keeping a blog now for six or seven years, and even though I have been far from assiduous in updating it, I find that I’ve now written several hundred posts in all. But as time has gone on, a good half of Chinese bloggers have transferred their attention to social networking sites, while the other half have become converts to microblogs of one kind or another. For the past year or so, the links on the left of my screen have been left unattended — it’s not just a case of tea going cold when someone leaves, for the tea has completely dried up, leaving only the cup itself. Most of those former bloggers have probably already forgotten their own username and password. But I like it better this way. It’s as though a bunch of people suddenly came crowding in, doing the same thing as you, then left again just as suddenly. You don’t feel lonely when they’re gone — it just seems tidier.

“Why don’t you have a microblog?” people ask. Actually, I did do one for a few days, but I soon came to feel it didn’t suit me, so I closed down the account. It’s not that I found the 140-character limit too restrictive, for who would insist on always writing an essay 10 times that length? A regular essay requires quite a bit of thought, whereas with a microblog post, just three or four neatly put sentences are all that’s needed. On days when you can’t think of anything to say, you can make do just by forwarding other people’s posts.

What I found was that after about a week of microblogging, a change seemed to have come over me. First of all, I couldn’t help constantly checking how many times my posts had been forwarded and how many new fans I had and how many people had made a positive or negative comment on something I had written. The person who bad-mouthed me has an officially verified account. What’s their background? I wonder. This one who praised me has a picture and is really quite a looker — I wonder where she lives? Hey, she’s really cute — how about if I put a “Follows” tag on her — that way she’s bound to respond by sending me a personal message, and after a bit of back and forth we can set up a date or something. Oh, what a tragic story here! That’s just terrible. I don’t have too much to say about it, but I’ll forward a note deploring what happened, and that should satisfy my readers’ expectations — I am supposed to be the scourge of all evil, after all. Hey, that pretty girl has sent me a message, so now I’m going to have a look at her web page and get a sense of her lifestyle, but I mustn’t get carried away. Oh, and now a friend wants me to pass on the news that he has a new book out. Hey, that tragedy now turns out to be just fake news — shit, it sounded so convincing. Wow, so many people are singing my praises, I'll send off a note thanking them. Right, this guy thinks I’m cool, too, and he’s got a good brain and good looks, so I maybe shouldn’t leave a comment after his, but rather forward his comment and then express appreciation so that way even more people will see how he praised me — that doesn’t count as shameless, after all, since it leaves everyone happy. Oh, it looks like that tragedy really did happen — Sina has confirmed it, so I had better hurry up and make a quick comment on it — if it turns out to be fake news then I can blame it on Sina. Oh, here’s another tragic story. I’ll forward it — hey, hang on, if I forward it, maybe that means the guy who sent it to me gets the credit, so perhaps I should rephrase things and say at the start: “I just read this story about something that happened in XX city ...” Wouldn’t that be better for my figures? And it would also show I don’t spend the whole day updating my microblog. Damn it, how can I be thinking that way?

Forget it, it’s time for bed. Okay, time to get up. Let’s have a look at the comments and update the news. Oh, and don’t forget the personal messages. So many newly added followers — no way I can look at them all. Hey, this starlet is a follower, and I have a crush on her. Why don’t I flirt with her a bit in a personal message? She wrote a whole post about me in her microblog, so why don’t I shoot off a reply to further tickle her interest? Hmm, who is this guy? I think I’ve seen him somewhere. Let’s read this stuff about him. Wow, his company is huge. Oh no, this little girl got terribly burned in that fire, how awful! Better forward that and donate some money. Maybe I should be writing some insight into life, but I don’t seem to have gotten any new insight into life recently! But shit, I’ve been at this game for so many years now, I shouldn’t have any trouble coming up with some surefire chicken soup for the soul, even if I can’t stand those pretentious soul-counselors. Now I’ve got to go out and do one or two things, but in my spare moments I’ll still be able to check my microblog. My friend texts me to tell me he used to know that chick I have my eye on — that’s good, I'll make some roundabout inquiries to try to find out how she’s placed. Oh, she’s married! Damn it, on her microblog she comes across as a lonely single. OK, so I'll just have a look at my friend’s microblog. What, he’s forwarded a post about saving dogs transported on the freeway, pleading with everyone to rescue those golden retrievers. Damn it, it wasn’t long ago that he ate the family dog for extra energy in the winter!

That’s right, writing these things on a microblog makes me feel good, for I am vain and sometimes even a bit hypocritical. As I achieve more in life, I can pretend to be less and less vain, since I have more reason to think highly of myself. But I remain vain internally. To opt out of attending awards ceremonies or upper-crust events is actually just another form of vanity rather than genuine detachment. After keeping a blog for years now, I’m not easily distracted by people’s comments or expectations. But if I keep a microblog for a few days, I find myself immersed in a heroic fantasy world. Of course, maybe it’s just me who acts that way. Maybe everyone else can write without a second thought, dash things off effortlessly and maintain their composure while displaying their art, without all the second-guessing that I do. But I felt an unhealthy state of mind was affecting me, so i decided to close down my microblog. If you’re not a writer, on the other hand, a microblog might be a good way to spice up your life and unveil a better version of yourself.

Microblogs have altered the form and speed with which information is transmitted and have complicated efforts to block it. In reality, of course, it is the Internet that has changed everything, and it’s a variety of products that have made communication that much more convenient. I have an alternative online pseudonym that I use regularly to sign in and see what’s going on. Actually there’s no real difference from before — it’s just less trouble to access. I used to get my news from the papers, and I might have to look at 20 newspapers; later I would sign into chat rooms — four or five of them; and now we have microblogs, and so long as I follow enough people’s microblogs and they are all to my liking, then all I need is a single account. Although more scandals are publicized than before, the issues go away all the more quickly.

When you read the papers, a month or two after an event, you'll still see follow-up, in-depth reports. When I was in middle school, I was under the impression that if a scandal was uncovered, it would be a topic of discussion for months. Later, 12 years ago, when I began to join online discussions, I realized just how many things I had been in the dark about before. Now, when you access microblogs you hear about even more things, but unless an event is really tragic, something that is news in the morning will have disappeared from view in the afternoon, and you need to do an online search to find any trace of it. But what I have learned is that, through all this time, I have remained pretty much the same person I was before, and I don’t seem to have affected the people around me, who just carry on with their own concerns and interests. I don’t think it’s the case that my essays have influenced readers’ tastes; rather, they have simply been consumed by readers who share the same tastes.

The result, I find, is not that people change, but that like-minded people come together in one place. In my own microblog universe, you’re bound to feel that this government is the pits and that its days are numbered. If you read someone else’s microblog, you find that life is comfortable and everything is great. And so, the world you see is simply the one that you follow online. And that world is updated so constantly you don’t even have time to download it.

There were a couple of days last week when all my time was taken up with motor racing and I didn’t go online at all. Only afterward, on the way home, did I check the latest microblog messages. A friend of mine posted something about a tragic incident that happened over a week ago. He had given the matter a lot of thought, done some research, and after seven or eight days came to a certain conclusion about what actually happened. His analysis made a lot of sense and I expressed full agreement. Usually a lot of people forward his messages, but only a few dozen people forwarded this one, and a post on the first page of comments read, “How come there are still people commenting on this? We already had our say on that.”