Help! How do I stop smoking pot?

Turns out the answer is complicated. An expert explains 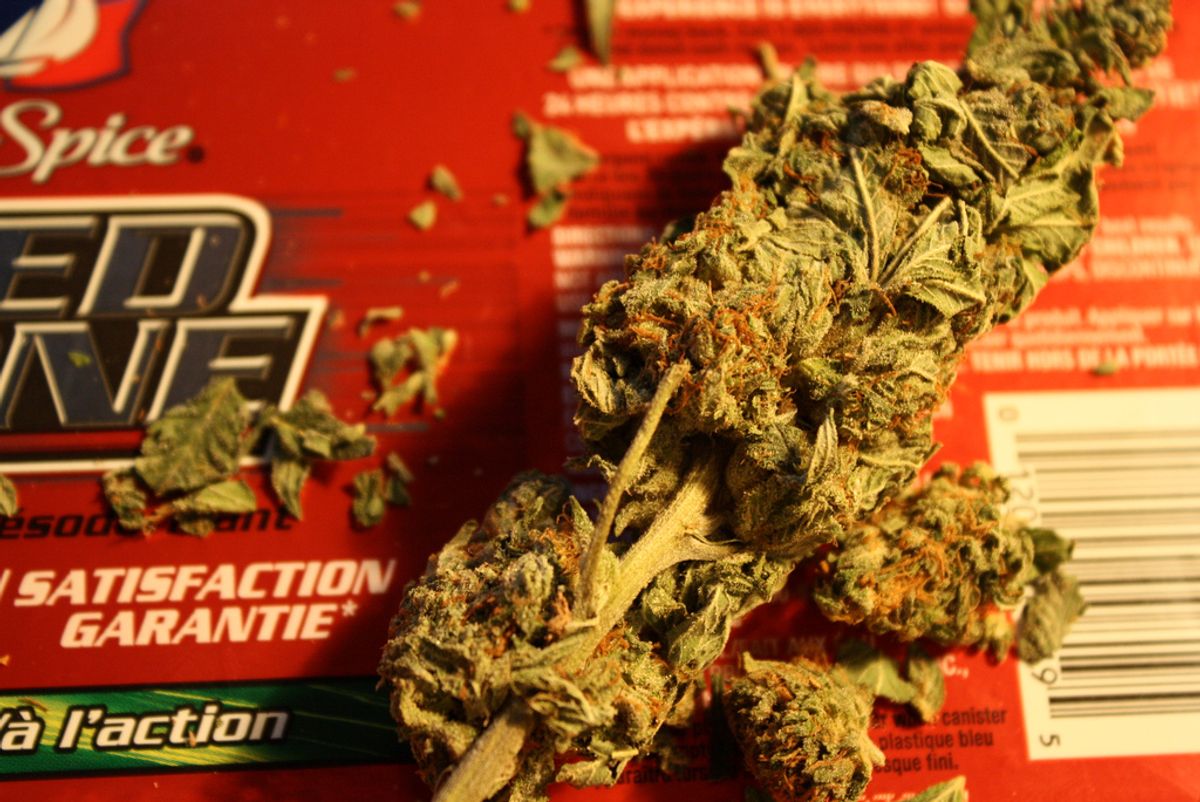 Welcome to my first “Ask Maia” column, in which I shall attempt to answer your questions and other matters drug related. I especially hope to answer personal questions about specific addictions—so bring on your problems.

Before we get started, let me answer what may well be your first question: "Who does she think she is to give advice to me?" Here's who: For the last 30 years, I have been obsessed with drugs: first as a teenage Deadhead, then as a cocaine-involved Columbia student studying what was then called physiological psychology (now neuroscience), next as an IV coke and heroin addict and finally as an ex-addict (coming up on 25 years free of cocaine and heroin) who has covered addictions and neuroscience for places as varied as PBS’ Charlie Rose and Bill Moyers, Time magazine, The New York Times and High Times. I am also the author of five books, two of which broke new ground in investigating addiction and treatment.

In short, I’ve been at this for a long time and looked at it from multiple angles in a way that probably makes me uniquely suited (if I may be so modest) to answer addiction questions, from 12-step issues to harm reduction conundrums. Plus, I’ve always admired Dan Savage (sex advice columnist of the widely syndicated "Savage Love") and obsessively read other advice columns.

Usual disclaimer: I am not a doctor and this should not be construed as medical advice. So, enough about me: Here’s our first question.

DG asks: What seem to be the most effective methods for heavy cannabis smokers to reduce and/or cease their use? Are there any?

Yes, but it’s complicated. Although marijuana is the most commonly used illegal drug, treatment for cannabis problems is remarkably under-researched. Partly that’s because weed genuinely is less addictive than alcohol, heroin, methamphetamine or cocaine. Only 18% of all treatment admissions in 2010 involved marijuana as the primary drug, according to the government’s Treatment Episode Data Set. Just a small fraction of marijuana users ever try any drug beyond alcohol and cigarettes. But heroin, prescription opioids, cocaine and methamphetamine combined account for twice as many admissions. (The rest are mainly alcoholics.)

That said, for some people, marijuana is a wickedly difficult master. Ironically, its (relatively) low cost and the lack of obvious severe negative consequences from frequent use make spotting problems and changing behavior more difficult: If a drug is just making you a bit less productive, a bit less present for your loved ones and a bit less happy, you are likely less motivated to kick the habit as you would be if you were losing jobs, homes and relationships as a result of getting high. What makes marijuana less harmful can also make it harder to kick, basically. Because like, Why bother, right?

So, what are the best ways to cut down or quit? The research suggests that behavioral methods found effective for other drugs also work for marijuana, but there is no miracle cure and the medications tested to treat it tend to have worse safety profiles than marijuana itself. No single best approach has been found.

But I can offer advice on where to start (hey, that's what I'm getting paid for). As with any drug, sorry to say, abstinence is the easier route than moderation. That’s because abstinence means you have to make one big choice and stick to it, while moderation means making many small choices, which takes more mental energy. For example, if you're going to moderate, you’ve got to define for yourself exactly what that is and then constantly prevent yourself from having "just a bit more." Reducing your dependence involves making different choices at different times, sometimes saying yes, often saying no. With quitting, by contrast, you always know what to do and when you’ve screwed up.

There are several things I think everyone should do before seeking help for any addiction. Like all heavy drug users, stoners get high for a reason: To get your drug use under control, you need to find other ways of solving the problems you currently medicate with pot. Since one of the most common reasons that people get high is to change negative mood states, you need to find out the roots of that problem.

So first, get a complete psychiatric evaluation from a psychiatrist: i.e., an MD who knows mental illness and is not linked with any type of addiction treatment program. At least half of all people with addictions have an additional psychiatric problem, often depression or an anxiety disorder. Getting that sorted out ups the odds that you’ll make real progress in recovery.

Don’t worry about chicken and egg questions: Treating both works better, no matter which came first. Seeing an unaffiliated professional means that you don’t simply get labeled with whatever the program happens to specialize in. (If you are worried about, and don’t want, meds, it still helps to know what your actual problem is so you can find non-med therapies if preferred: A psychiatrist is generally better at diagnosis than an addiction counselor because they are less narrowly focused and more highly trained to look for varied issues).

Second, try the least intensive options first. You don’t start cardiac care with a heart transplant, so you shouldn’t go straight to inpatient for most addictions, particularly marijuana. If your goal is abstinence, you may indeed want to start with the obvious Marijuana Anonymous and Narcotics Anonymous self-help groups: Those who like the 12-step approach find it incredibly helpful, and it’s worth attending a few meetings to see if you are one of them because it’s more readily available than anything else—and it's free.

In kicking any addiction, social support is critical: These groups are one way of getting it. People whose drug of choice is marijuana may feel more comfortable at Marijuana Anonymous—which now has pretty widespread in-person meetings as well as online groups—because the hardcore heroin and cocaine stories that tend to dominate NA meetings are often off-putting for those used to reefer's comparatively undramatic effects. Mellowing out and getting the munchies just can't compete with, say, overdoses and emergency rooms—at least in the mind of those in the business of competitive dysfunction. And if the 12 steps are not your style, check out SMART Recovery, a secular evidence-based alternative, also abstinence-focused, which has mainly online meetings.

If you find that self-help alone isn’t cutting it, try outpatient therapy. Before you seek any such help, know what your goals are and look for someone who you feel connected to and who will help you with those goals, rather than impose their own. Obviously, if you are seeking moderation, you need to find a provider who will accept that as a treatment goal—but less obviously, you probably have goals like getting a better job or improving your relationships that are the real reasons you are worried about marijuana. If the therapist isn’t going to prioritize your priorities, treatment isn’t likely to work. (Some people, however, do like to be told what to do: If that’s you, choose someone directive.) Choosing a goal and choosing a sympatico therapist are both linked with good outcomes, regardless of the actual therapies.

Now, as for the best type of therapy, if you aren’t sure whether your goal should be abstinence or moderation, the best place to start is motivational enhancement therapy (MET). Sometimes known as motivational interviewing, this (usually) short-term talk therapy “meets you where you’re at." For example, if you want to smoke just on weekends as opposed to every day, a good MET therapist will help you find ways to try to reach that goal.

Even if your ultimate aim is moderation, most MET therapists will recommend trying at least a month of abstinence: This “sobriety sampling” allows you not only to see what life is like without weed but to break the habitual patterns that reinforce problematic use. MET will typically explore the ambitions you have for your life and allow you to recognize when your smoking interferes with reaching them and how to stop it.

Another therapy often conducted in conjunction with, or as a follow-up to, MET is cognitive-behavioral therapy—and yes, it does share an acronym (CBT) with a frightening sexual kink. (Very NSFW and don’t click unless you want forever to have to stifle laughter when you hear the acronym used).

The CBT approach focuses on identifying problematic thinking and feelings that tend to spur use and providing better ways of coping. For example, you might feel rejected if a friend walks past without saying hello—and that negative feeling may trigger a desire to smoke as an escape. CBT teaches, first, to recognize that your sense of rejection might be misguided—the guy might not even have seen you or might have been in a bad mood of his own—and second, to identify other ways of dealing. You might talk to him later, for one, or you might call someone else or listen to music or exercise or anything else that lifts your mood without being destructive. (CBT basically systematizes a lot of 12-step slogans—Feelings aren’t facts! It’s not about you!—without the steps or higher power.)

Finally, a key to successful recovery is to simply keep trying and to keep reminding yourself to seek different help if what you're doing isn’t working. Being mindful of this can help you through the rough spots. Above all, remember that that the goal is to feel better, not worse. Good luck!