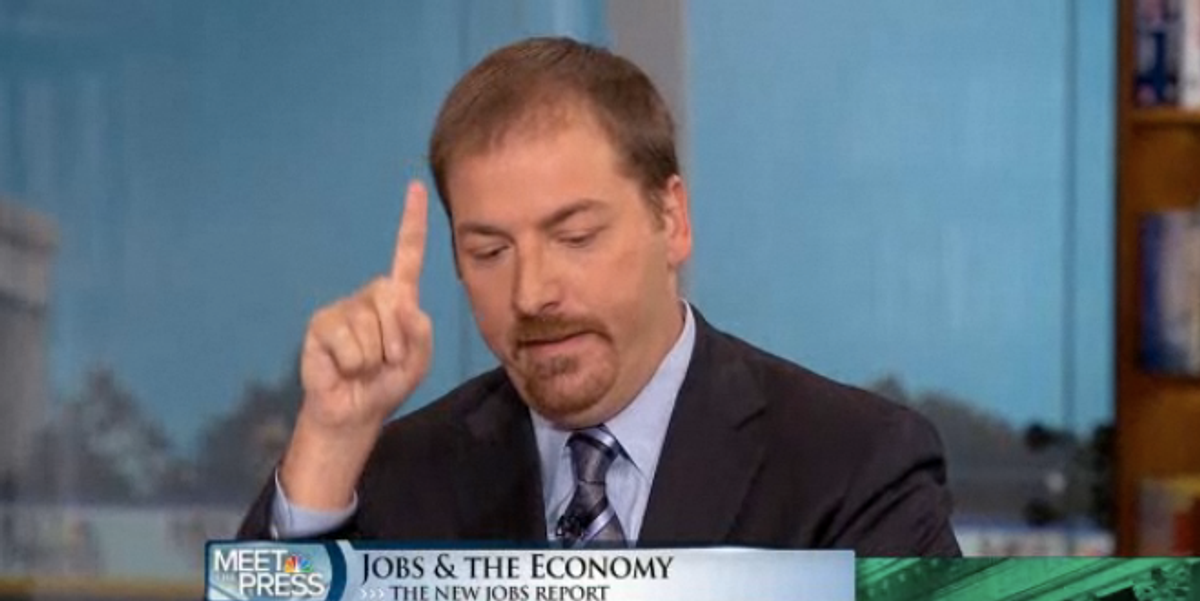 What use are Sunday morning news shows in our post-truth political era? Four days after Mitt Romney lied his way through his debate with a listless, diffident President Obama, and two days after former GE CEO Jack Welch ousted Donald Trump to become Mayor of Crazytown on Foursquare, journalists and campaign surrogates had a lot of decisions to make: Would conservatives escalate, backing Romney and Welch? Would liberals fight back more effectively than Obama (OK, that's an easy one)? And would reporters on the panels lapse into easy "both sides do it" equivalence and ignore the way the Republican campaign, including Welch and Romney himself, has ratcheted up the prevarication and character assassination to new levels?

To keep from drowning in despair and nihilism over what the Sunday shows tell us about the bankruptcy of American politics, Salon is bringing you Sunday Best: Our choice of the best moment of all on the top Sunday shows. (We may occasionally have to turn to MSNBC's "Up With Chris" or "Melissa Harris-Perry," but if we put them in the mix every week, it wouldn't be a fair fight. We'll mainly focus on the productions of the big networks.)

This Sunday, there were plenty of good moments.

Predictably, Democrats fought back better than Obama did, with Robert Gibbs calling Romney's performance "fundamentally dishonest" and his budget math "absolutely crazy" on ABC's "This Week." On Fox, Maryland Gov. Martin O'Malley told Chris Wallace, "The fact of the matter is in this debate we saw Big Bird meet the big lie." Also on "This Week," Paul Krugman told the panel, “The press just doesn’t know how to handle flat-out untruths," which led Mary Matalin to absolutely lose her shit and call Krugman himself a liar.

You have mischaracterized and you have lied about every position and every particular of the Ryan plan on Medicare, from the efficiency of Medicare administration, to calling it a voucher plan, so you’re hardly credible on calling somebody else a liar.

Actually, Mary, Romney himself admitted it was a voucher program on Wednesday night. Someone's lying here, and it's not Krugman. Digression: Paul Krugman probably deserves the Sunday Best award for simultaneously fighting off Peggy Noonan's gauzy, shimmery fantasies and untruth, along with Matalin's sharp and ugly lie-daggers, on the very same show. But Krugman would probably win it every week, which wouldn't be fair.

Things got even more interesting when it came time for Republicans to defend Romney and Welch.  On "Meet the Press," Newt Gingrich took the unusual strategy of declaring, “I think it’s clear he changed" his tax policy, a change he described as “good politics.” Yet Romney hasn't come out and said he's changed his tax policy; he's only saying that his tax cuts won't cost $5 trillion because of all those loopholes and deductions he'll close – you know, the ones he won't tell us about.

Republican strategist Mike Murphy, also on "Meet the Press," didn't deny Romney's tax-slashing plans, he took the tack of defending Romney's refusal to enumerate the loopholes and deductions he'd eliminate in order to raise the tax burden of the rich – because such details would hurt Romney politically.

Here is the problem. You guys won’t give him any credit for closing loopholes, because like you guys, he won’t name the loopholes. Why? Because you’ll attack him for doing it. You attack him for not giving you a little target… and then you attack him when you get the target.

Remember, that's also why Romney told us he won't inform the voters which federal programs he plans to cut. So Murphy and Romney are basically admitting that the Republican nominee's actual policies are so unpopular that if he told us what they were, he wouldn't get elected.

On Jack Welch's claim that Obama's "Chicago" campaign cooked the BLS numbers to make unemployment go down – he famously tweeted, "Unbelievable jobs numbers..these Chicago guys will do anything..can't debate so change numbers" – Gingrich took the position that Welch's charge was "plausible," at least. "It rings true to people. You have a president of the United States so deeply distrusted by people like Jack Welch -- who is hardly a right-winger, Welch is one of the most successful businessmen in America -- that Welch instantaneously assumes this is the Chicago machine."

Not surprisingly, Peggy Noonan, also on "This Week," took a similar dreamy "reality has a well known liberal bias" approach to what James Carville termed "economic birtherism." Noonan proclaimed from on high, "I don't think anyone in America looks at that number and thinks 'that's reality in America.'" Really, Peggy? You're the arbiter of reality? Reality is what Peggy Noonan feels America feels? We're all in trouble.

But Gingrich's spew inspired our Sunday Best, when NBC's Chuck Todd lashed back. Todd can sometimes seem a captive of the Beltway, but on Sunday he staged a prison break, going off on Welch and Donald Trump and formerly respectable business leaders for their vicious insanity. See the video below, starting at 09:00:

"This is really making me crazy," he told his "Meet the Press" friends. " The Federal Reserve gets questioned now for politics these days. The Supreme Court and John Roberts get – we have got, we have corroded – what we’re doing, we are corroding trust in our federal government in a way. And, one-time responsible people are doing it. And the idea that Donald Trump and Jack Welch, rich people with crazy conspiracy theories, can get traction on this is a bad trend … We have mainstreamed, 'when did you stop beating your wife.'"

Certainly I'm not endorsing putting the politics of the Federal Reserve or Supreme Court off limits, but it was great to see Todd object to the mainstreaming of crazy by "one-time responsible people." That's the Sunday Best for this week.

One final debate note: I'm not a fan of "both sides do it" journalism, but to be fair, while there's no equivalent of economic birtherism on the left, there is a kind of  "debate trutherism," where fervent Obama supporters, especially on Twitter, explain that the president was once again playing 18th-dimensional chess and intentionally blowing the debate only to win it somewhere down the line, drawing out Romney's lies with his somnolent performance. Um, no. Obama blew it, big time.

Thankfully, the campaign rejects debate trutherism. "The president is his harshest critic," David Axelrod told "Face the Nation." The debate about the debate is over. If we don't want to say Romney "won" because lying should disqualify you from a win, let's just say Obama lost. And move on.