Why won't the GOP talk about affirmative action?

The right's oddly silent about a Supreme Court affirmative action challenge. Maybe because they use the policy all the time 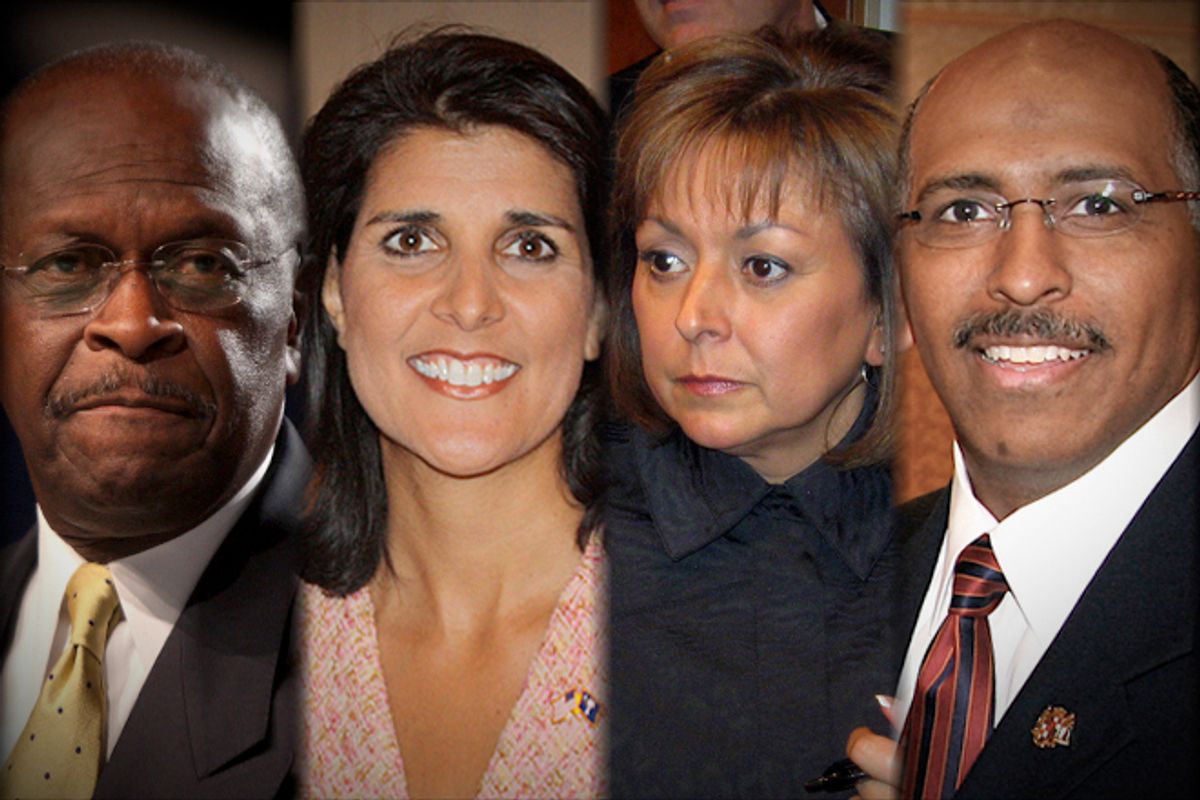 In a political season packed with racial controversies, from food stamps to birth certificates, the attack on one of the nation's most significant racial opportunity programs has managed to fly below the radar. Until now.

The Supreme Court, which will hear arguments challenging the legality of affirmative action next Wednesday, is widely expected to strike down the policy as unconstitutional.

That would deliver a victory that Republicans have pursued for decades. So why aren't they talking about it?

The Romney campaign refuses to address the issue at all, despite the looming court case. It recently rebuffed inquiries from the AP and Politico. (The Politico reporter said the campaign acknowledged his questions but refused to answer them.) Romney’s record on the issue is mixed: As governor, he quietly eliminated a Massachusetts affirmative action program through a 2003 executive order, but later he reversed himself under pressure.

Romney’s current hesitance mirrors his party. While Donald Trump once insinuated that Obama's admission to Columbia and Harvard should be a campaign issue, few mainstream Republicans have seized on affirmative action as a political attack, either as a policy contrast or as a personal smear against the president or other minority opponents. A few conservative pundits and activists are still agitating for a racialized October surprise, to be sure, but Romney and Republican leaders are steering clear. That reflects several factors – the political dynamics of trying to unseat the first black president and a recession election – but the main substantive reason for the GOP to avoid affirmative action is that the party now uses the policy all the time.

While conservatives mount their hard-line attacks in court, party leaders are scrambling to find and promote minorities, both to run for key offices and to serve in the highest levels of government. In a party where 9 out of 10 members are white, according to Pew surveys, that effort requires fast-tracking minorities over equally qualified white candidates. Today’s Republican leaders have a tortured relationship to affirmative action – they tip the scale for diversity in electoral politics but blast college admissions officers who do the same thing.

A glance at the convention in Tampa provides a classic example.

Republicans gave coveted speaking slots – the kind that can catapult a local official to national notice – to newcomers like Mia Love, a black congressional candidate in Utah, and recently elected minorities such as Marco Rubio, Nikki Haley and Susana Martinez. Love, while undoubtedly an interesting figure, was plucked from an obscure perch as mayor of a newly created development city of just 17,000 people in northern Utah. She has never won a higher office and was advanced, in part, for diversity.

This is nothing new for the GOP.

Another keynote spot went to Condi Rice, who was, as she said in 1997, a "beneficiary" of affirmative action hiring at Stanford. Rice later joined a Republican cabinet under President George W. Bush that was the most diverse in the party's history. To find qualified black policymakers in a fairly white party, however, Bush also departed from the GOP’s partisan bench. (Two of Bush's most prominent minority appointees, Rice and Colin Powell, were non-politicians drawn from institutions at the forefront of affirmative action recruitment, the military and higher education.)

Some liberal critics have attacked the GOP's promotion of visible minority candidates as some kind of disingenuous tokenism, given the party's rank and file membership. But that knee-jerk reaction misses a chance to declare a partial victory. After all, the disparity demonstrates how Republicans are using a type of affirmative action.

George W. Bush never admitted, of course, that he used diversity as a plus factor. His administration formally opposed affirmative action, even as his cabinet and the armed services reflected proactive diversity recruitment. Bush had the same problem as today's Republicans – gagged by right-wing rules for racial speech, they will not preach about what they obviously practice.

This dynamic is not limited to GOP leaders who are nervous about the party's electoral future in an increasingly diverse electorate. Lately, rank-and-file Republicans seem more eager to find and promote diverse leaders.

Republican delegates voted in the party's first black chairman, Michael Steele, after Obama's election. “For some members, it was a great opportunity to advance – at least symbolically – the  party’s ideal of trying to embrace [African Americans],” says Steele, who joined a court brief defending affirmative action in the current case. While it’s fine to showcase African American GOP talent, Steele told me, the party is still “light years” away from advancing an “economic strategy to empower dispossessed African Americans and other minorities.”

Last year, before scandals derailed his campaign, Herman Cain was embraced by many Republican activists who openly touted the benefits of a prominent black candidate leading the party.

This year, the Tea Party got in on the action in the red state of Texas by rebuffing a more prominent, white Republican Senate candidate in order to take a chance on Ted Cruz. The conservative National Review, which backed Cruz, not only heralded his diversity – it all but admitted the zero-sum political affirmative action at work.

"As the Houston-raised son of a Cuban immigrant, [Cruz] is proof positive that the American dream is very much alive and well – if in desperate need of defenders within the political system," the magazine enthused. Then it went further: "Mr. Cruz can provide that defense in a way that Mr. Dewhurst simply is not equipped to do."

("Because he is a minority" is the end of that thought.)

A lot, it turns out, because going to an elite school is one of the only ways that regular people without great wealth can still break into the political elite.

In the Court’s 2003 ruling upholding affirmative action, Justice O’Connor made that very link. Half of the Senate and half the nation's governors had earned law degrees, she stressed. That elite winnowing process should not be lost on the current Court, either, since it is comprised exclusively of graduates from Harvard (5), Yale (3) and Columbia (1).

If all those influential credentialing machines were barred from even checking whether their admissions process resulted in bleached classes, O’Conner argued, universities could end up perpetuating old inequalities instead of combating them.

"In order to cultivate a set of leaders with legitimacy in the eyes of the citizenry," she wrote, "it is necessary that the path to leadership be visibly open to talented and qualified individuals of every race and ethnicity."

This year, the most remarkable part of an Obama administration's brief advocating affirmative action echoed that line – and fortified it by invoking our racially integrated military.

"If the pathways to professional success are visibly open to all segments of American society," the brief argued, then the goals of "military readiness" and "national security" are more attainable. Those generalities quickly turn to tough talk.

In a little-noticed but notable passage, Barack Obama, who has not flinched from exercising his prerogatives as Commander-in-Chief, authorized the legal position that affirmative action is "an urgent military priority." Citing a U.S. military report on Vietnam, the President's brief deplored “the disparity between the overwhelmingly white officer corps and the highly diverse enlisted ranks” at the time, asserting that the absence of minority officers “undermined the military's very legitimacy by fueling ‘popular perceptions of racial/ethnic minorities serving as ‘cannon fodder’ for white military leaders’” (emphasis added).

Without a doubt, that is one of the most strident arguments the Obama administration has ever made about a racial issue.

The appeal comes at a time while some say Obama's own election shows the country no longer needs affirmative action, a trendy claim that dissolves, on its own terms, when you consider there are zero black senators today. More broadly, most white Americans do not view Obama’s ascendance as a reason to alter civil rights policies. Only 31 percent of whites say his election improved race relations, compared to 48 percent of blacks; and 1 out of 10 whites think his election was the top improvement for blacks in the last century, while a striking 1 out of 3 blacks think that. (The numbers are from a survey last year.)

The Obama administration’s brief ends by asking the Court to uphold its precedent from nine years ago, allowing affirmative action to remain as one option, among many, for policymakers in government, the military and higher education. That seems unlikely. (Justice O'Connor cast the swing vote last time, and she was replaced by Justice Alito, who voted to roll back school integration under Brown v. Board of Education in a controversial 2007 ruling.)

If the Court does make affirmative action illegal, there is one undeniable immediate impact: The very thought that public programs can proactively pursue diversity will be pushed underground. As a practical matter, a government employee would literally break the law by saying that diversity was a positive factor for, say, military recruitment. So that kind of talk would end. But would the ideal end as well?

Given the incremental progress around the country and the nonpartisan pride Americans increasingly take in breaking racial barriers, from Barack Obama to Ted Cruz, it is hard to imagine all the principles of affirmative action could be instantly squashed by the Court.  Some leaders might even still try to practice affirmative action, in their own way, without saying so out loud. The conservative Court would ensure, in other words, that we all start practicing affirmative action like Republicans.