Arsenic: It's what's for dinner 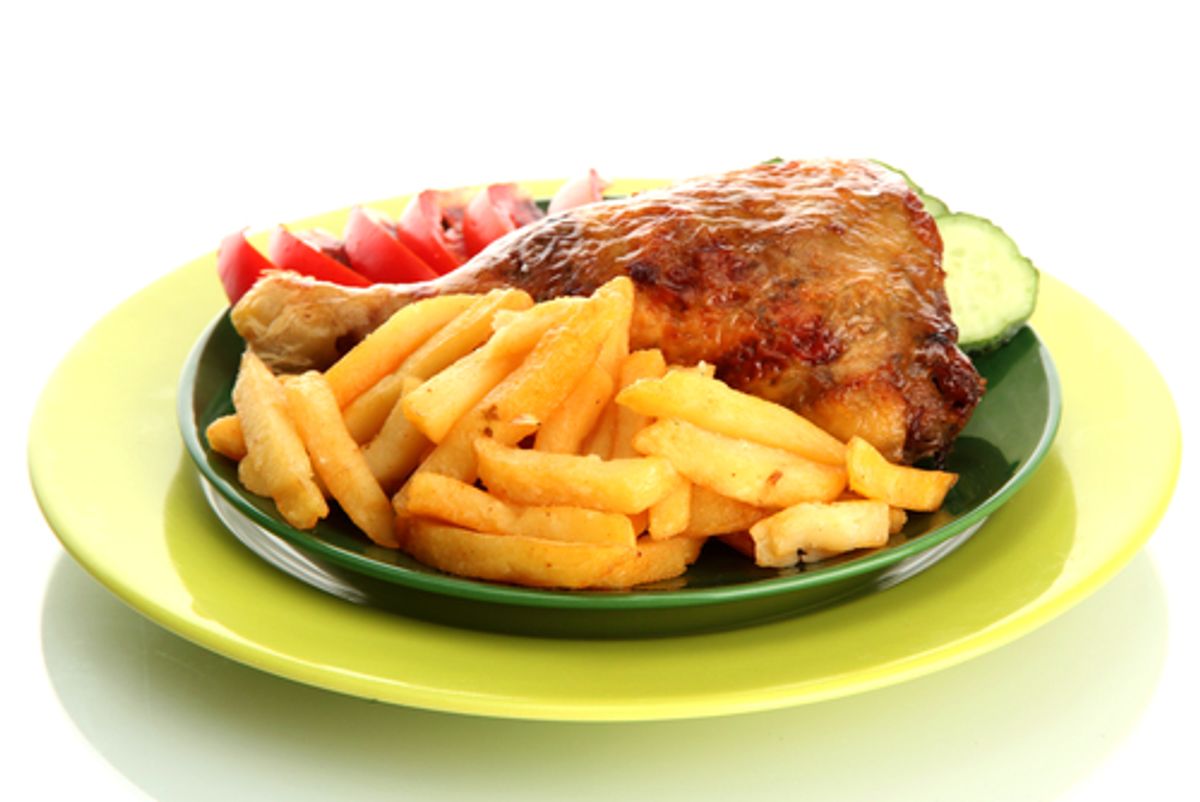 The American right wing loves to hate Big Government, but does size matter? Perhaps the problem is not Big Government, but Dumb Government, Inefficient Government or even Corrupt, Sold-Out, or Inept Government. The recent bombshell Consumers Union, publisher of Consumer Reports, dropped – that rice contains dangerous levels of arsenic – illustrates how good, effective government can save lives by keeping deadly toxins out of the food supply whereas our federal bureaucracy (aided, abetted and cajoled by industry) has instead let us down.

Arsenic “is considered the number one environmental chemical of concern for human health effects both in the U.S. and worldwide,” according to information published by Darmouth Toxic Metals Superfund Research Program. It can be divided into two categories: organic and inorganic. While organic arsenic is itself a probable human carcinogen, inorganic arsenic is a definite human carcinogen that is linked to liver, lung, kidney, bladder, and skin cancer as well as “increased risk of vascular and heart disease, type 2 diabetes, reproductive and developmental disorders, low birth weights in babies, neurological and cognitive problems, immunodeficiencies, metabolic disorders, and a growing list of other serious outcomes.”

In short: you don’t want this in your food.

“When you're talking about a carcinogen [like arsenic], there is no safe level,” Consumers Union’s senior scientist Michael Hansen explains. Instead of eliminating all risk, one looks at carcinogens in terms of levels of risk. For example, Consumers Union provides a table explaining how much rice one can eat to achieve a 1 in 1,000 lifetime risk of cancer. The federal government does not limit the amount of arsenic allowed in food, so Consumers Union based its standard on the EPA’s initial recommendation for arsenic limits in drinking water (five parts per billion).

In fact, the drinking water standard – which is now set at 10 parts per billion (ppb) – is a fine place to begin the story of how government, industry and arsenic fit together. Arsenic is a naturally occurring element, but the U.S. has increased the amount of arsenic in our environment and our farmland over the past century by using 1.6 million tons of it in agricultural and industrial uses. About half of that amount has been used since the mid-1960s.

Once in the environment, arsenic – a chemical element and a heavy metal – does not break down and go away as do some toxins. Once so much arsenic was sprayed on farms, it was in the environment for good – and it could find its way into our food and water. U.S. limits on arsenic in drinking water were set at 50 ppb in 1942, before arsenic was classified as a carcinogen. But a 1999 report by the National Academy of Sciences showed that this level failed to protect Americans from an unacceptably high risk of cancer.

The EPA then proposed lowering the limit for arsenic from 50 ppb to just 5 ppb in 2000. Industry complained, and the Clinton-era EPA settled upon lowering the limit to just 10 ppb instead. Once George W. Bush took office, he initially attempted to block the change, thus keeping the World War II-era limit of 50 ppb. By November 2001, the Bush administration gave in to allowing the 10 ppb limit to go forward. Even still, Sen. Barbara Boxer noted that this 10 ppb limit would allow three times as much cancer risk as the EPA’s usual goal.

Arsenic in food deserves some special concern, and yet there are no regulations limiting it. In addition to arsenic used in industry that finds its way onto farms, there is arsenic used in agriculture that the farmers themselves bring to their farms, a practice almost dating back to the Civil War.

Long before the days of DDT, the first synthetic pesticides were arsenicals. An arsenical paint pigment called Paris green was first used against Colorado potato beetles in 1867. Even then, arsenic’s deadly toxicity was well known – Will Allen tells in his book, The War on Bugs, how farmers lost cattle after they ate potato plants treated with Paris green. Other arsenic pesticides, London purple and lead arsenic, soon followed Paris green onto the market. By the 1930s, “well over a hundred million people in the United States suffered from mild to severe arsenic and lead poisoning,” writes Allen.

And yet, even after arsenicals were displaced by other pesticides for most uses, half of the arsenic used in the U.S. has been in the last half century. Recent uses of arsenic fall into two categories: livestock drugs and pesticides.

Until recently, the arsenical livestock drugs roxarsone, nitarsone, carbarsone and arsanilic acid were all used in chickens, turkeys and swine. Roxarsone was widely used for disease prevention, weight gain, feed efficiency and improved pigmentation in chickens from 1944 until it was voluntarily removed from the market by Pfizer in 2011 following the revelation that chickens fed roxarsone had inorganic arsenic in their livers. The latter three are all still legal, regulated by the Food and Drug Administration.

Once used in chickens, the arsenic in roxarsone remained in the chickens’ litter, which consists of bedding, droppings, feathers, and dropped feed. Poultry litter, in turn, served as fertilizer on farms and – believe it or not – cattle feed. And, as it turns out, the top rice-producing state in the U.S., Arkansas, is in second place behind Georgia for broiler production. (Of the six rice-producing states, all rank among the nation’s top broiler producers, with Mississippi and Texas among the top five, and California and Missouri among the top 10.)

As pesticides, many arsenicals were phased out over the years, but some uses remain. In 2006, the EPA attempted to essentially ban the remaining uses of organic arsenicals, because "following application, these pesticides convert over time to a more toxic form in soil, inorganic arsenic, and potentially contaminate drinking water through soil runoff." Following outcry from industry, EPA backed away from its initial decision.

All organic arsenicals except one herbicide, monosodium methanearsonate (MSMA), were banned as of 2009. After that time, MSMA could still be used on sod farms, golf courses and highway rights of way until the end of 2013. After that, only one remaining us of any organic arsenical would be permitted: MSMA on cotton.

As luck would have it, the six rice-growing states are among the top cotton-growing states: Texas, Mississippi and Arkansas top the list, with California, Louisiana and Missouri each growing significant cotton acreage as well. Rice is so susceptible to taking up arsenic because it is often grown in fields flooded with water. In fact, a 2008 study found that growers can reduce the amount of total and inorganic arsenic in rice by growing it under “aerobic” (not flooded) conditions. And yet the same states that grow rice are also the cotton-growing states where MSMA is still used.

So why does the EPA still allow MSMA on cotton if arsenicals are so bad that they are banned on absolutely everything else? Two words: Palmer amaranth. Despite years of warnings, biotech and chemical companies and cotton growers have created the perfect weed. Palmer amaranth has evolved resistance to both ALS inhibitor herbicides and to glyphosate, the active ingredient in Monsanto’s Roundup, and one plant can produce half a million seeds.

Weeds commonly evolve resistance to ALS inhibitors, much more so than for any other class of herbicides. But resistance to glyphosate was almost unheard of before Monsanto first introduced its Roundup Ready genetically engineered crops to the market in 1996. Glyphosate use shot up, giving weeds the evolutionary force needed to develop resistance. Nowhere was this truer than on fields that rotated between two Roundup Ready crops, soybeans and cotton.

Glyphosate-resistant Palmer amaranth first turned up in GE soybeans and cotton in Georgia in 2005 and before long it was documented across the U.S. including in the rice-growing states of Arkansas, Mississippi, Missouri, Louisiana, and California. In some case, resistance to both types of herbicides was found in the same Palmer amaranth plant. The weed has caused growers to turn to more toxic herbicides, hand-weeding, and even entirely abandoning their fields.

As you can see, between them, the USDA, FDA and EPA have allowed pesticides, pharmaceuticals and practices that led to the toxic load of arsenic Consumers Union found in rice. The EPA regulated pesticides, the FDA regulated drugs, and the USDA worked with farmers in many aspects of agriculture and gave the green light to Roundup Ready crops. It was no secret that arsenic was going into farms and fields where our food is grown, and yet the question of where the arsenic went was mostly ignored. The FDA recently released its own tests, confirming Consumers’ Union’s findings. As their data shows, even organic rice contains arsenic. (Organic farmers cannot use arsenical pesticides, but they can use manure from chickens fed roxarsone and other arsenical drugs.)

So is the government to blame for this massive oversight and public health risk? Michael Hansen doesn’t think so. “The issue in the larger context isn't so much that it's bad government,” he says. “If you put it in the proper context, it's not only the gutting of the regulatory agency but also the control by industry and outside forces. I think there are definitely people within the agency who would like to take action on a number of things but they can't because of the reaction by industry… The power of industry is so strong, you can't expect the government to take action when they are trashed left and right.”

Consumers Union recently sent and published three letters, one to the EPA, one to the FDA and one to the USDA, asking them to rectify all of the problems named in this article so that no more arsenic finds its way into U.S. farms and so that standards are set for how much arsenic is allowed into our food supply. They also commend Congress for introducing the R.I.C.E. Act (Reducing Food-Based Inorganic and Organic Compounds Exposure Act) and they advocate its speedy passage (which is not likely in the current politically charged environment).

When citizens reflect on the size of their government, surely most would agree that it ought to be “big” enough to keep arsenic out of the food supply. But the comedy of errors between three different agencies that allowed so much arsenic onto our farms and then our dinner tables is exactly the sort of disaster that causes voters to throw up their hands and wish the government would go away altogether. Yet, if Hansen is correct, the incompetence shown in this case was not a matter of bureaucratic ineptness but one of industry’s capture over the agencies charged with regulating it. Voters going to the polls need to recognize the problem. Instead of voting for candidates who vow to get government out of our lives we should be voting for leaders willing to take a stand against undue corporate influence.