Democrats really do have a shot at winning the House

Democrats remain quietly confident that they can take the House. Will Mitt's bumbling campaign work in their favor? 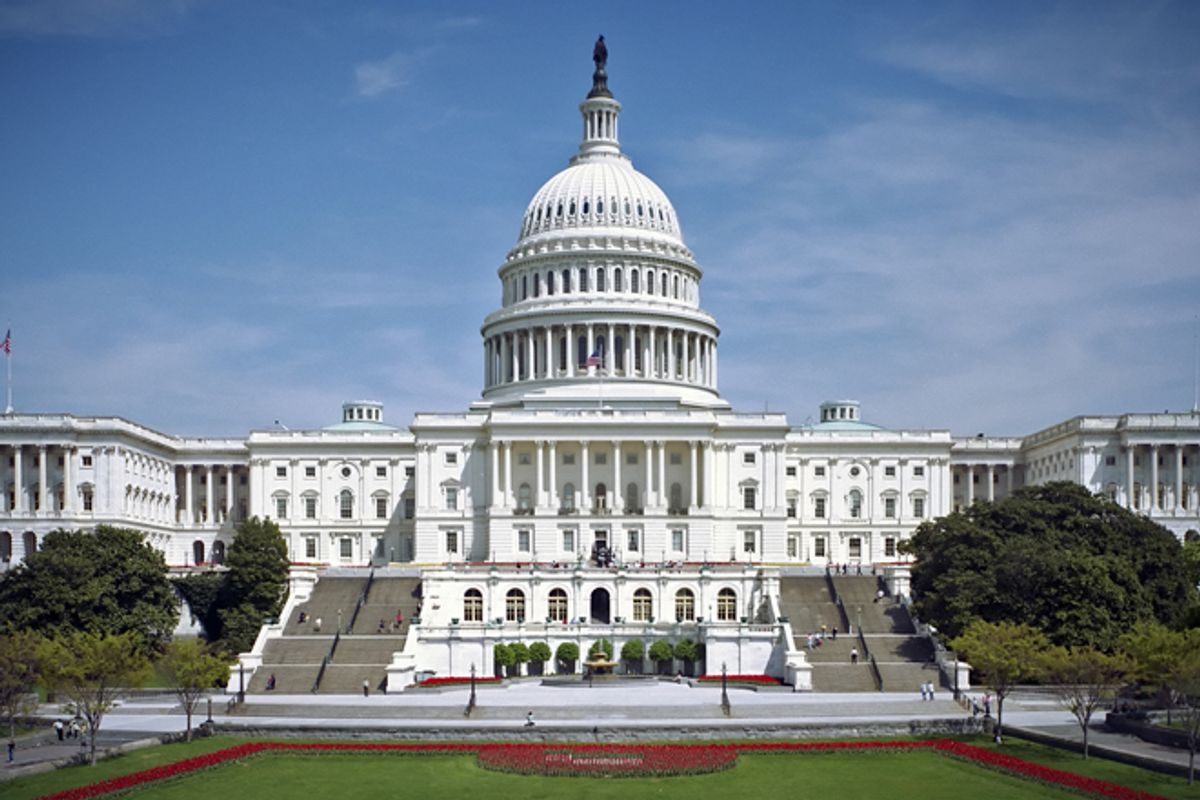 With most observers still predicting -- though less confidently than before last week's presidential debate -- that Obama will secure a second term and Democrats maintain control of the Senate, it is the House that could determine the short-term future of the country and mean the difference between a fruitful or impotent second term for the president. Would it look like Obama’s first two years in office, when he and congressional Democrats pushed through sweeping reforms on healthcare and Wall Street, or the last two years, which were defined by bitter stalemate and unproductive battles over spending issues? Obama’s ambitious legislative agenda of unfinished work from the first term -- immigration reform, climate change legislation, etc. -- would be virtually dead on arrival if Democrats can't take the House, blunting the victory of a reelection.

If you ask most analysts, the question of whether Democrats can win the necessary 25 seats is not even worth asking. “House majority remains out of Democrats’ grasp,” veteran handicapper Stu Rothenberg titled a blog post yesterday. Charlie Cook agrees. So does Kyle Kondik, the House editor for Larry Sabato’s Crystal Ball, who wrote Thursday, “there’s very little indication that Republicans will lose their House majority.”

Democratic leaders have been saying publicly for weeks that they think they have a good shot of picking up the House, which pundits dismiss out of hand as empty posturing. Privately, some Democrats say they really believe the odds are better than 50-50 and that all the pundits and handicappers are a month behind -- a month that’s seen a nose dive for Mitt Romney, with a potentially dire coattail effect for House Republicans. But Democrats are wary of making their case too strongly, they say, for fear that conservative super PAC money will abandon Romney and starting pouring into key House races, where a relatively little bit of money can make a huge difference. So for now, at least, they're sitting back without pushing back too hard on the prevailing conventional wisdom.

Even the Weekly Standard’s Bill Kristol seems a bit concerned.  “IF the polls are right, and IF nothing much changes over the remaining six weeks, the House could well be in play,” he wrote recently. “Maybe Republicans will hold on in an even popular vote election with the help of incumbency advantages and post-2010 redistricting. But it's also possible that an Obama +3 victory on Election Day would drag the Democrats to an edge in the congressional vote — and control of the House. In any case, based on current polling, I don't think one can say that it's now out of the question that we could wake up on the morning of November 7 to the prospect of ... Speaker Nancy Pelosi.”

Indeed, there’s some reason for his concern in the polling. In early August, the Reuters/Ipsos poll House generic ballot test -- which asks if respondents would vote for a generic Democrat or generic Republican -- showed the parties tied at 46 percent.  In September, this same poll showed Democrats leading by 6 points, 49 percent to 43 percent. An NBC/Wall Street Journal generic poll from July had similar movement since July, as did an Economist/YouGov poll. The most recent generic poll comes from NPR, which shows Dems up 3 points. Another recent poll of exclusively battleground congressional districts, conducted by Politico and George Washington University, had Dems up 2.

Democrats need 25 seats to win, and internal polling shows there are 32 Democratic candidates leading or tied with their Republican opponent, according to a memo from the Democratic Congressional Campaign Committee, the official body tasked with electing Democrats to the House. The committee claims a total of 75 races are “in play” across the country, and has put 53 districts in its Red to Blue program, which means they think there’s at least enough of a shot at winning in those seats to invest money and resources.

The DCCC has outraised its GOP counterpart, the NRCC, by about $10 million over the cycle and is prepared to spend about $18 million more on commercials. Democrats have reserved $65 million in airtime before Election Day, while NRCC has received just over $47 million. But that advantage could be easily wiped out by outside Republican super PACs, explaining why Democrats are hesitant to tout their optimism about the battle for the House. Karl Rove’s American Crossroads and its affiliate Crossroads GPS spent $50 million on House races between Oct. 13 and Election Day alone in 2010.

There are few things working against Republicans this year. The problem with any wave election is you then have to defend your gains the next cycle. These gains, by definition, come mostly from swing districts previously occupied by Democrats, so it doesn’t take huge shifts in public opinion to swing things back the other way. Redistricting, the decennial process of redrawing congressional districts, was expected to give Republicans a huge boost, thanks to their massive gains in state Houses across the country, which control the process. But the end result will probably have little net effect. “Add up all the numbers and you get Democrats +1 seat, Republicans -1. In other words, redistricting has been something of a wash,” Rothenberg wrote earlier this year. For the dozens of states where Republicans effectively gerrymandered districts, there are other, larger states where Democrats did the same, especially in California and Illinois. These states are so big and have so many congressional districts that anybody’s list of the top House races is dominated by these two states.

The key, Democrats say, is Mitt Romney and his lackluster performance. "In August, the pick of Congressman Paul Ryan made his Medicare-ending budget the ticket mate for every Republican running for Congress and gave us the nationalized Medicare debate we’ve wanted all year. Then Congressman Todd Akin’s offensive comments reminded voters how extreme Republicans are," the DCCC memo states. It's still unclear whether Romney would bring the House down with him if he lost, but it's certainly possible. Even with all this, Democrats’ chances of capturing the House are still shy of 50 percent -- 25 seats is a tall order -- but probably better than a lot of pundits think.