Larry Pressler, who served 22 years in Congress as a Republican, speaks with Salon about why he's endorsing Obama 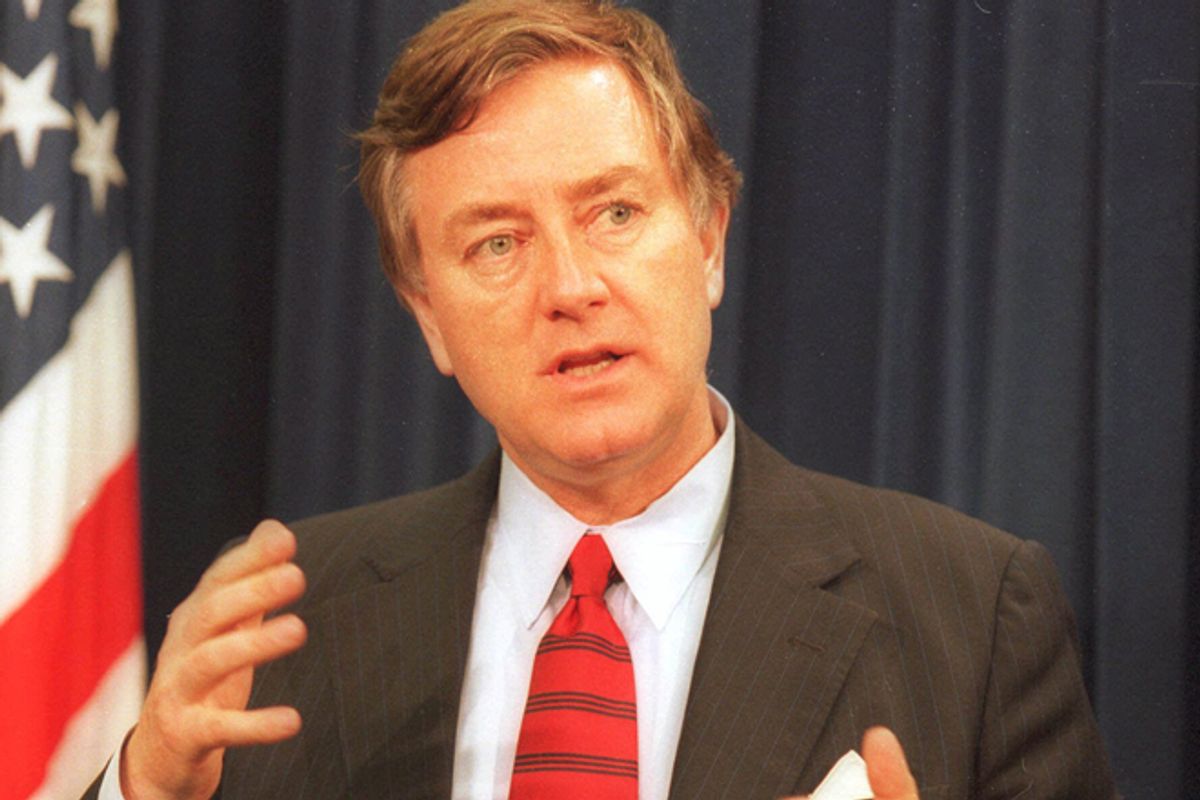 Larry Pressler served as Republican senator from South Dakota for 18 years, and another four in the House, but today endorsed President Obama’s reelection. Pressler, who was the first Vietnam vet elected to the Senate, has dedicated much of his time since leaving Congress in 1997 to helping disabled and homeless veterans, and says he thinks they would be worse off under a Romney administration. A moderate, Pressler voted for Obama in 2008 -- the first time he voted Democratic -- saying he was deeply concerned with the rightward shift of the Republican Party. He wrote an Op-Ed in the Huffington Post today explaining why he thinks Romney, who gave a major foreign policy speech today, would be an unfit commander-in-chief.

Pressler is perhaps best known for being the only member of Congress to flatly reject entreaties by FBI agents posing as Arab sheiks offering bribes. The Abscam scandal resulted in the conviction of a U.S. senator and five House members, but Pressler told the faux sheiks to take a hike, which earned him glowing praise. "What have we come to if turning down a bribe is 'heroic'?" he said at the time.

Reached in Paris, where he is teaching a university course, he told Salon he still considers himself a Republican, but said Ronald Reagan couldn’t win a GOP primary today. The following conversation has been lightly edited for brevity.

How do you see the difference between Romney and Obama on foreign policy? From Romney’s speech, it sounds to me like he supports largely the same policy, but would carry it out with a different style.

For the most part, there was not much of a division as I can see it, except that Romney is absolutely committed to the neocon value of expanding our military budget and overseas power, and Obama did say in the debate that he would be for some reductions in military power.

In your Op-Ed, you note that Romney hasn’t mentioned veterans in several speeches on foreign policy he’s given. He didn’t today either.

Yeah, that’s really my main concern. I’ve spent the last three years being a volunteer for the Jerico Homeless Veterans effort. We have two veterans homeless centers -- in the Bronx and in Harlem, in New York -- and across the United States there are lots of homeless veterans. I’ve dedicated about half my time as a volunteer to veterans.

You wrote in your Op-Ed that you feel, as a veteran, that you were "written off" in Romney’s comments on the 47 percent. Can you explain that?

The 47 percent included anyone who is getting a government benefit and there are lots of disabled veterans getting a government benefit as their only source of income. But that doesn't mean they are dependent. If they receive a wound in war, we have an obligation to them, in my opinion, and we should not put them in a 47 percent of people who don’t want to work or something.  I think veterans were very offended by being lumped into that.

Beyond the rhetoric, do you see a Romney administration as being bad for veterans?

Veterans with disabilities are not addressed -- everybody says they’re for them -- but whatever it takes, we must take care of those veterans. And I have not heard Romney say that. I have heard Obama say it. And I have also heard Obama give the Vietnam Veterans a particular salute. I’m a Vietnam Veteran and we’re dying off and almost forgotten about and we never really got told thank you. And that’s OK with me, but it’s not OK with some of those who had severe wounds and disabilities.

Everybody has all these programs, ball games praising veterans, and all the presidential candidates praise them, but Obama’s the only one that’s got the budget money. And he’s the only one willing to -- if we have to raise taxes in order to help veterans, we’ll have to raise them on the very wealthy, and maybe on everybody, but we’ve got to do it.

You say in your Op-Ed that you voted for Obama in 2008 because “the Republican Party was drifting toward a dangerous path that put extreme party ideology above national interest.” How do you see this happening today?

Do you see anybody left? I mean, Lugar is retiring, Hagel is gone.

Certainly, certainly, there are some fine people left, but I am just in a mode for the last few years as a man without a party.

But you do still consider yourself a Republican?

Yes, I still am registered as a Republican. And I think I’ll stick it out, I’m trying to make the party more moderate. I’ll probably join some groups that will work for more moderation.

Do you think, if Obama wins a second term, the party will realize its mistake and shift back toward the center, or will the more extreme wing say, "We weren’t conservative enough," and force the party to shift even further to the right?

I’m afraid the extreme wing will say that we weren’t conservative enough. And there are so few people who voted in the primaries, that’s what I’m fearful of, so I’m trying to protest that. My theory is that my voting for Obama will send a signal: If more people do that, maybe the party will moderate.

You ran for president against Ronald Reagan. A lot of people have said that Reagan wouldn’t even recognize the Republican Party of today. Do you think that’s right?

I think that’s right. I don’t think Reagan or myself or any of us could win a primary now with these standards and these closed primaries [which prohibit people who haven’t registered as Republicans from voting]. I just don’t know what we’re going to do with this small number of people who still participate in the Republican primaries, because we’re nominating such conservative candidates that they usually don’t win general elections.