Its mythology is grounded in exile and return, so why won't Israel grant refugee status to North Africans in need? 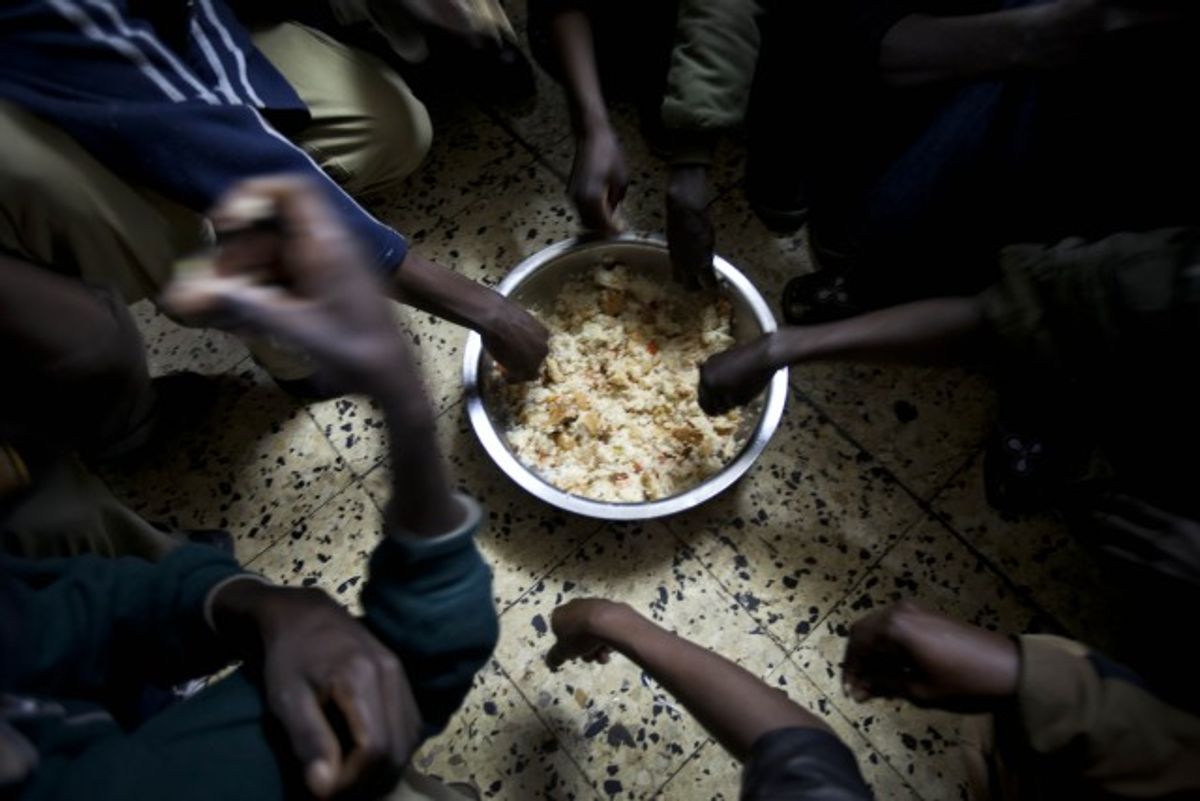 Levinsky Park is where you meet a friend if you're an African refugee living in South Tel Aviv. One recent afternoon, I found around 50 Sudanese and Eritreans sitting on the small stretch of lawn in groups of two or four or five. Nearly all were men in their twenties or thirties. Most were remarkably thin. They wore faded jeans and T-shirts or polo shirts, and talked softly amid the traffic roar.

The park is across Levinsky Street from Tel Aviv's central bus station, the hulking gateway through which those who had to abandon their country entered the strange city. One man told me that he slept in the park for 10 nights after arriving at the bus station. Bedouin smugglers had brought him across Egypt's Sinai desert. Israeli soldiers picked him up just inside Israeli territory, questioned him and left him penniless on the street in the southern city of Beersheba. An Israeli gave him bus fare to reach Tel Aviv. Another refugee who came by the same route told me he slept in the park for a month.

Since 2006, over 60,000 people have crossed the border from Egypt into Israel. Nearly two-thirds are from Eritrea, most of the rest from Sudan. Officially they are "infiltrators." Most end up in the poor neighborhoods of South Tel Aviv, among working-class and poor Israelis.

The government hasn't tried to deport them to home countries where they might face death. Neither, though, does it grant them refugee status.

Instead, Israeli government policy is denial: denial of a legal avenue for Sudanese and Eritreans to prove they are seeking asylum from persecution; denial that Israel has the same refugee challenge as other developed countries; unwillingness to pay attention to where Israel is actually located; blindness to what Israel's history teaches about giving refuge.

Right now, new refugees aren't arriving in Tel Aviv. The flow across the violence-ridden Sinai has dropped, but that's just a piece of the reason. Under the draconian Infiltration Law, enacted last January, those who do make it to Israel are detained in camps—really open-air prisons—in southern Israel, to be held for three years or more.

Worse yet, Interior Minister Eli Yishai has ordered immigration police to begin arresting all Sudanese "infiltrators" and sending them to the camps on October 15, to be held until they can be sent home. That might not be in their lifetime.

Yishai, determined to be the shrillest anti-foreigner voice in Israeli politics, has declared that "the infiltrator threat is no less serious than the Iranian threat." Yishai's plan tramples Israeli and international law, as a coalition of Israeli human rights groups argued in a suit filed before the Supreme Court last week. (The next day, they filed a separate suit asking the court to overturn the Infiltration Law.) If the court doesn't order Yishai to desist by next week, it seems that neither Prime Minister Benjamin Netanyahu nor anyone else in government will keep him from imprisoning the Sudanese.

Part of what's frightening in this picture is the terrible normalcy, the lack of Israeli exceptionalism. Sane people flee countries like Eritrea and Sudan if they can. If the first or second country they reach is unsafe, some keep going. They pay smugglers to take them across seas or deserts. Western countries, especially the ones most easily reached, try to evade their responsibility under the United Nation's 1951 Convention Relating to the Status of Refugees. The Israeli suit against Yishai cites judgments of the European Court of Justice against Italy and Greece for failing to grant asylum. In every destination country, there are sincerely or cynically racist politicians who declare that refugees, along with immigrants merely fleeing hunger, will dilute, will wash away, the national character. These politicians are human amplifiers hooked up to the fears of citizens whose neighborhoods are changing and who feel they own little besides their national character.

For an Israeli, what's particularly frightening about Yishai and other anti-refugee politicians is that they are our own racists, and that quieter politicians follow their lead rather than ostracizing them. When the Knesset passed the Infiltration Law, most members of parliament simply stayed away from the vote. Netanyahu has neither reprimanded Yishai not overruled him. The military, clearly acting on government instructions, tries to prevent refugees from getting into Israel. Early last month, a group of 21 Eritreans who'd entered Israeli territory but hadn't crossed Israel's new border fence were left stranded in the desert for a week. Finally, two women and a teenager were allowed to stay in Israel. The rest were turned back into Egyptian territory, in violation of the convention on refugees. No one knows what happened to them. Israeli human rights activists say the incident is unusual mainly because it reached the media. Upset Israeli soldiers have called to report similar cases.

It's true that Israel is unusual among Western countries: It's on a direct land route from Africa, which may make it marginally easier for refugees to get here. What makes it more unusual is the story of refugees and refused asylum seared into its identity. As every Israeli learns from childhood, in the 1930s, Jews trying to escape Germany were denied refuge by comfortable Western countries. Of all Israelis, the 1930s-fixated Netanyahu should be aware of this. He, Yishai, and other morally myopic politicians of the right apparently learn from this past only that Jews need a place of safety.

An Eritrean refugee told me that he heard about Israel when he was in Egypt. He knew of Jerusalem and Nazareth in church, but he didn't know where Israel was. He was surprised when he arrived that it was an earthly country, with traffic noise, grime, and smokers. He was surprised that not everyone was deeply religious. This dissonance is common among tourists, pilgrims, and immigrants to Israel.

Yishai, Netanyahu, and partners aren't new here. Nonetheless, they too suffer from the dissonance between their myth of Israel and the actual country. Their picture of the Jewish homeland is located in a Jewish story of exile and return, but not in a geographical spot on the route that people have taken out of Africa for a million years or so. They never imagined anyone besides Jews wanting refuge in Israel, or Israel having an obligation to provide it. The very real people in Levinsky Park irritate their imagination. But they need to get real.