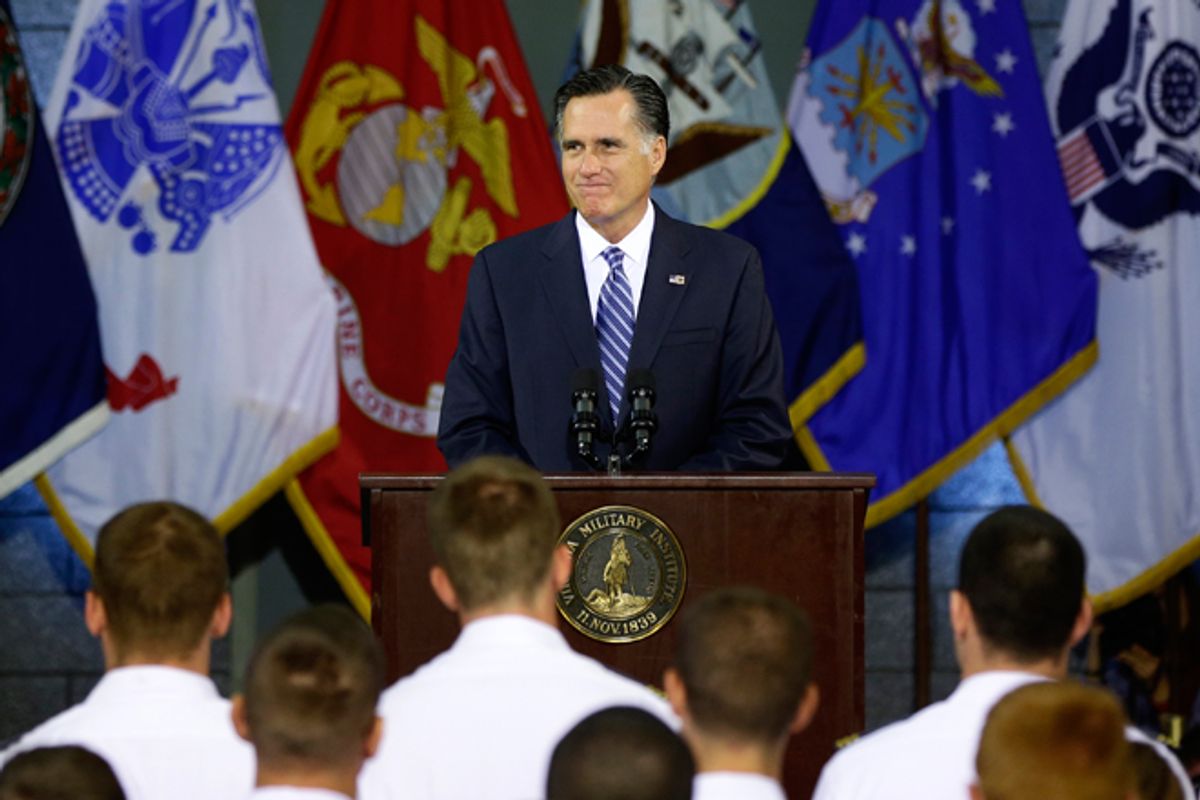 Mitt Romney's hailed foreign policy speech combined magical thinking and mendacity, with promises or threats to maintain, restore, escalate or commence military involvement in Afghanistan, Iraq, Syria, Libya and Iran, at minimum. Speaking at the Virginia Military Institute, Romney had to have his audience of cadets wondering how many wars he'd commit them to if elected.

Ironically, in a speech most passionate about making sure there's no "daylight" between the U.S. and Israel, Romney repeatedly hailed VMI graduate George Marshall, the former secretary of state who famously opposed Harry Truman's recognizing the state of Israel in 1948.

Romney used the tragic killing of Libyan Ambassador Christopher Stephens Sept. 11 to paint a picture of a region made more dangerous by Obama's alleged weakness and fecklessness. "Americans are asking how this happened. I've come here today to offer a larger perspective on these tragic events," he pompously proclaimed. But as he hailed "the massive protests in Benghazi" by thousands of Libyans outraged by Stevens' killing, he seemed not to notice that it was exactly those forces Stevens, Obama and Secretary of State Hillary Clinton had worked to support and strengthen in their Libyan military and diplomatic policy.

Certainly the administration has to answer questions about and be held accountable for the security problems that led to Stevens' killing, but Romney seemed not to understand that Stevens died trying to empower the Libyan people who supposedly inspired Romney. He spoke of Stevens as though he were some rogue hero rather than a career diplomat committed to implementing a policy directed by Obama. He accused the president of "not partnership but passivity" in dealing with freedom-loving citizens in Libya and elsewhere in the Middle East, and once again pulled out the "leading from behind" slur as though it was stated presidential policy rather than an offhand, anonymous quote in a New Yorker story from almost a year ago. He didn't say that the president goes around apologizing for America, though, so that's something.

But he did tell one big lie, insisting Obama hadn't signed a single free trade agreement, when in fact he's signed three, with South Korea, Panama and Colombia. Romney also committed himself to seeing a "peaceful, prosperous Palestine" living side by side in peace with Israel, even though he had earlier dismissed the possibility of a two-state solution at his famous Boca Raton fundraiser. "I look at the Palestinians not wanting to see peace anyway, for political purposes, committed to the destruction and elimination of Israel, and I say there's just no way," he told his wealthy donors. "[S]o what you do is, you say, you move things along the best way you can. You hope for some degree of stability, but you recognize that this is going to remain an unsolved problem … and we kick the ball down the field and hope that ultimately, somehow, something will happen and resolve it."

CEO Mitt also seemed to think he can order other countries around, insisting he would get our European allies to spend more on defense, complaining that only three of 28 NATO nations spend what they are committed to on the military. Good luck with that. Mitt's magical thinking was also in evidence as he promised to counter Iran's military support for Syria's Assad with … something. "It is essential that we develop influence with those forces in Syria that will one day lead a country that sits at the heart of the Middle East," he insisted, sounding a little Palinesque.

Just before the speech, a Romney adviser told reporters that the former Massachusetts governor would consider sending combat troops to Libya – a reversal of Obama's policy as well as his own earlier opposition to direct military involvement there. There were vague hints of more military intervention in Syria. Romney also accused Obama of abandoning Iranian dissidents who protested the 2009 election, but never said what he'd have done to support them. He expressed unhappiness with the exit of American combat troops from Iraq and seemed unsettled about their scheduled departure from Afghanistan, yet he was almost as vague about what he'd do differently as he is when it comes to which tax deductions he'll eliminate.

Yet it's possible Romney's own advisers don't know any more about his real plans than what he laid out in his speech. The New York Times revealed Monday that several of them say "they have engaged with him so little on issues of national security that they are uncertain what camp he would fall into, and are uncertain themselves about how he would govern." They aren't sure he's even reading his foreign policy papers they write, and one told the Times:

Would he take the lead in bombing Iran if the mullahs were getting too close to a bomb, or just back up the Israelis? Would he push for peace with the Palestinians, or just live with the status quo? He’s left himself a lot of wiggle room.

Perhaps fittingly for a guy who has staffed his foreign policy team with Bush retreads, Romney got high praise from former Defense Secretary Donald Rumsfeld, who tweeted: "Terrific, comprehensive speech by Gov. Romney at VMI. He knows America's role in the world should be as a leader not as a spectator."