Neoliberal disdain, some corners of support and a healthy dose of hypocrisy in post-election comments 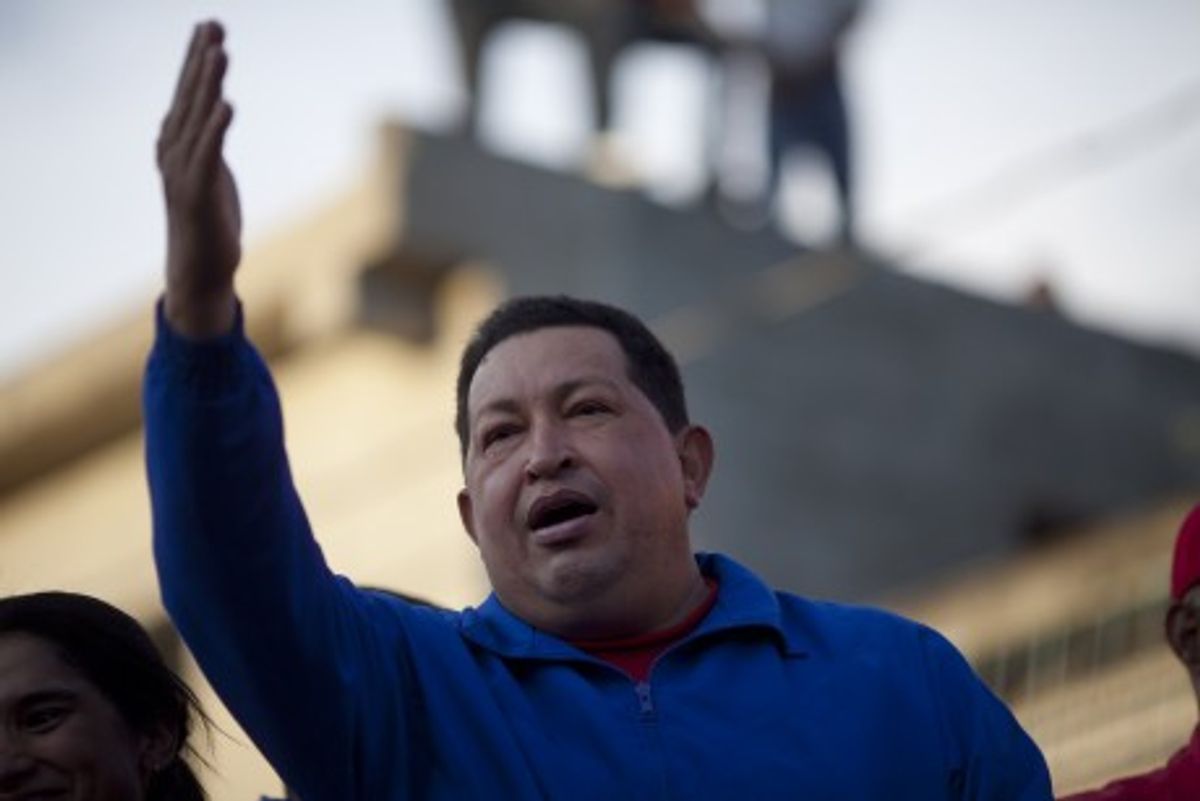 Nothing about the U.S. media response to Hugo Chavez's reelection in Venezuela Sunday has been surprising. Save for a few corners of support for the socialist leader, American pundits have -- with a strong dose of neoliberal ideology -- criticized his record and the means through which he has remained in power.

Chavez won the mandate of another six years in power (adding to his 14-year tenure) with more than 54 percent of the vote, beating challenger Henrique Capriles Radonski. A number of conservative U.S. news outlets were quick to challenge the validity of the large margin (which was nonetheless the weakest margin the socialist leader has ever enjoyed in an election).

Fox News reported that "exit polls told a different story." In an example of what Glenn Greenwald described via Twitter as "revealing and amusing … cognitive dissonance" in Western media over this election, the Fox News host decried the Venezuelan result, suggesting that even if there was no technical foul play, Chavez had overly influenced the elections with money and media monopolies.

Greenwald assured Twitter followers that he had no love for Chavez -- his comment aimed only to skewer American journalists engaging in painful hypocrisy.

Opining in the Wall Street Journal, Mary Anastasia O'Grady used venomous scare quotes to note that "Chávez 'won' the Venezuelan presidential election" and that the Venezuelan leader made Chile's Augusto Pinochet look like a "hero" by comparison (as Pinochet, a war criminal, voluntarily gave up power). O'Grady's piece is colored by disdain for public spending by Chavez's government to the detriment of free market economies and oil prices.

The Christian Science Monitor, by contrast, noted that the chance to "consolidate the 'Bolivarian 21st-Century Socialism'" was welcomed by many Venezuelans celebrating in the streets. Carlos Romero, a political scientist at the Central University of Venezuela, told the magazine, "Half of Venezuela doesn't like the revolution," citing inefficiency. However, CSM notes, "the opposition was unable to shed its decade-old image of being right-wing oligarchs with pretensions to dictatorship." Meanwhile, the magazine questions whether Chavez in his fourth term will be able to deliver promises including "become more independent, increase control over natural resources, boost energy output, unite Latin America, and improve the environment."

Kevin Gosztola of FireDogLake's Dissenter blog also noted the hypocrisy of American news outlets decrying Venezuela's democratic elections (which have regularly been commended by impartial bodies). Gosztola takes a strong stance in Chavez's defense. He compares figures illustrating much higher satisfaction in Venezuela with their democratic process than Americans have with their own electoral system. He concludes:

The country did not re-elect Chavez because poor people are waging a class war led by a leader intent to further decimate Venezuelan society. They re-elected him because, as Weisbrot has noted, “Poverty has been cut in half and extreme poverty by 70%. And this measures only cash income. Millions have access to healthcare for the first time, and college enrollment has doubled, with free tuition for many students. Inequality has also been considerably reduced.”
Neoliberal and/or free market policies have been soundly rejected. Those at the bottom are doing better. Americans should begin to ask whether Chavez and his movement have been doing something right.

And finally, in light of the fact that President Obama spent Monday dedicating a monument to Cesar Chavez, the Nation's Jeremy Scahill took to Twitter to preempt some unfortunate confusion: