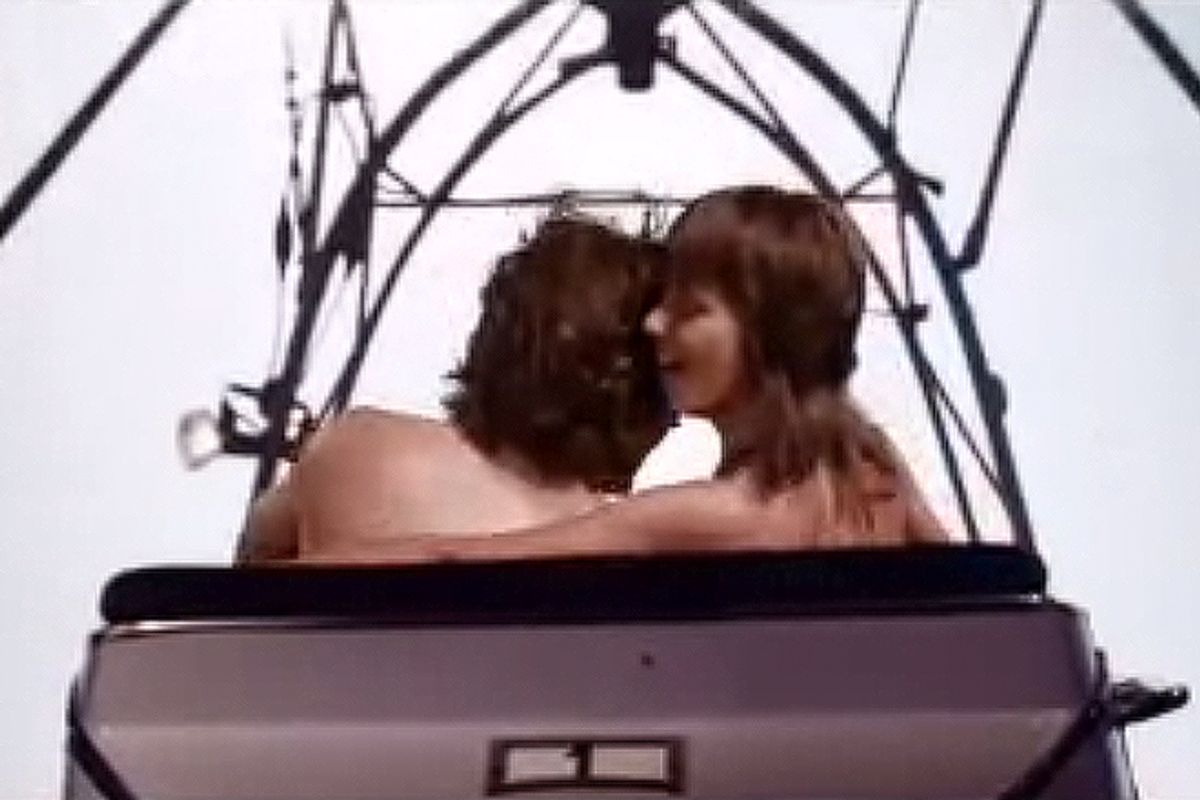 A still from "Panorama Blue"
--

There was a time when I thought that the ludicrously outlandish situation surrounding the anti-Islam Web video "The Innocence of Muslims" didn't have anything left that it could surprise me with. A bloody, bona fide global diplomatic crisis spawned by a movie with sub–Tommy Wiseau production values, produced by a mysterious, multi-aliased former meth cooker? What additional layers could this rotten onion of an insane story possibly have to offer? I got my answer when writers on the Web began identifying the previously unknown director as the 65-year-old, Santa Monica, Calif.,–based Alan Roberts, a onetime schlock filmmaker who hadn't helmed a movie in 18 years. When I read that name my heart sank just a little bit more, and the entire affair became just a little bit stranger, sadder and more confusing.

You see, it just so happens that, alongside NSFW titles like "Karate Cop" and "Young Lady Chatterly II," Alan Roberts directed one of my favorite B-movies of all time: a goofy, deeply weird and oddly compelling piece of 1970s sexploitation called "Panorama Blue." Almost entirely forgotten and virtually impossible to find, as lost classics go it's not the missing hour of "The Magnificent Ambersons" or anything. But still, for what it is, "Panorama Blue" is an unforgettable slice of cheeky Russ Meyer-style weirdness that deserves better than to be languishing in obscurity like it is today.

In the age of grindhouses and 42nd Street exploitation palaces, when every piece of cheap, mass-produced cinematic schlock had to be weighted down with sackfuls of superlatives in the hopes of getting noticed (Scariest! Goriest! Sexiest!), "Panorama Blue" billed itself as "the world's mightiest adult film." A cheeky claim, perhaps, but damned if Alan Roberts didn't try his best to make his film live up to it. "Never before," announces a portentous title card in the trailer, "has the motion picture industry produced an adult film with such vastness, scope and stature." Anyone who's seen it would agree that Roberts' surreal fever dream of a skin flick more than bears that out.

What is it that makes "Panorama Blue" stand out among a sea of other forgettable B-grade soft-core schlock? For one thing, just like Kubrick's “2001” and Paul Thomas Anderson's newest piece of Oscar bait, “The Master,” it was screened in 70mm when it was released in 1974. It was the only adult movie ever shot in that epic-size format, and only a handful have been produced in America since then. (It also copped another move from Kubrick's sci-fi masterpiece by prominently featuring Strauss' "Also sprach Zarathustra" in a memorable scene. In “2001,” it heralds one of the key moments in human evolution. In “Panorama Blue,” it soundtracks a young couple getting busy in a roller-coaster car.)

For another thing, to emphasize its self-proclaimed status as the pinnacle of cinematic art, “Panorama Blue” begins with a dry, honest-to-goodness lecture on film history by producer Richard Ellman that lasts for nearly 14 minutes before the first credits even appear on the screen. (Ironically, it's about the same length as the trailer for “The Innocence of Muslims.”) I ask you, curious film fan, when was the last time you saw a triple-X movie that also included a discussion of the work of George Eastman or George Méliès? (Readers are encouraged to follow my example and keep any “A Trip to the Moon” jokes to themselves.)

As a narrative, “Panorama Blue” has no plot per se. Instead, leisure-suited producer and host Richard Ellman takes the audience on a “Mondo Cane”–style tour of various unrelated love scenes, all imaginatively staged to exploit the full scope of the epic 70mm format. We're presented with couples romping in various states of amour, high on a sun-kissed mountainside, inside moving cars, engaged in a full-on dirt track stock car race (the "Indy 69," naturally), in a moving roller coaster, decked out in their finest clothes, surrounded by a full symphony orchestra performing a piece identified as "Intercourso in F Minor." The roller-coaster scene might be the thing about the movie that is most well-known, as it was featured prominently in the phenomenal (and NSFW) trailer. Like many films of its type, the sex scenes are fairly tame by the standards of today's adult movies. Although there's obviously gratuitous T & A, it's largely genital-free, and the sex scenes are all obviously simulated via a lot of comically over-exaggerated bucking and thrusting. The silliness is compounded by the campy overdubbed dialogue. (As a sonic experience, the audio collage of nonsensical small talk and one-liners dubbed over the "Hollywood party" ends up sounding something like a Robert Altman film that got bit by a radioactive episode of “Hee Haw.”)

Its cast of hundreds features a cavalcade of now-forgotten 1970s adult stars — Sandy Dempsey and Uschi Digard, who went on to cult fame with appearances in several Russ Meyer films — familiar faces to grindhouse regulars. But perhaps most notable to modern viewers is an appearance by John Holmes, the real-life inspiration for Mark Wahlberg's Dirk Diggler character in "Boogie Nights" and a man who, like Alan Roberts surely does now, came to know a thing or two about the sad ironies of fate and the cruel ups and downs of life on the border between Hollywood and porn. (Interestingly, in “Panorama Blue,” Roberts takes great pains to avoid showing Holmes', er, most notable feature. Would it have required extra budget? Or would it simply have been too much for audiences to handle in panoramic 70mm?)

Although it's not as well known as other films from the so-called Golden Age of Porn like “Emanuelle” or “Behind the Green Door,” “Panorama Blue” has the distinction of being perhaps the gaudiest, most eccentric, most ambitious of the bunch, and deserves to be more well-known than it is. When he directed it, Alan Roberts may not have thought he would go down in film history, but some amount of mainstream attention wouldn't have been out of the question. It never came, though, and he stayed in the soft-core ghetto making films like “The Happy Hooker Goes to Hollywood.” As the 1980s gave way to the 1990s, his directing jobs dried up and he was grinding out work in editing and postproduction.

And while an awful lot about the mysterious production “The Innocence of Muslims” remains murky and Roberts is now in hiding after a string of fatwas have called for his death, it's been speculated that, like the cast, he may not have known the true nature of the film he was involved in, and was manipulated by its shadowy “producer” Nakoula Basseley Nakoula into making an innocuous film called “Desert Warriors” that was then redubbed and edited to be an attack on Islam. Comments about Roberts from the cast and his associates seem to bear this out, painting a picture of the director that looks less like a wild-eyed ideologue looking to foment interreligious chaos and more like a washed-up industry has-been excited to be behind a camera once more and maybe, just maybe, finally get his name out there again. It's a sad irony worthy of a P.T. Anderson film that his wish ended up coming true for all the wrong reasons.