GOP: Gays Out of the Party 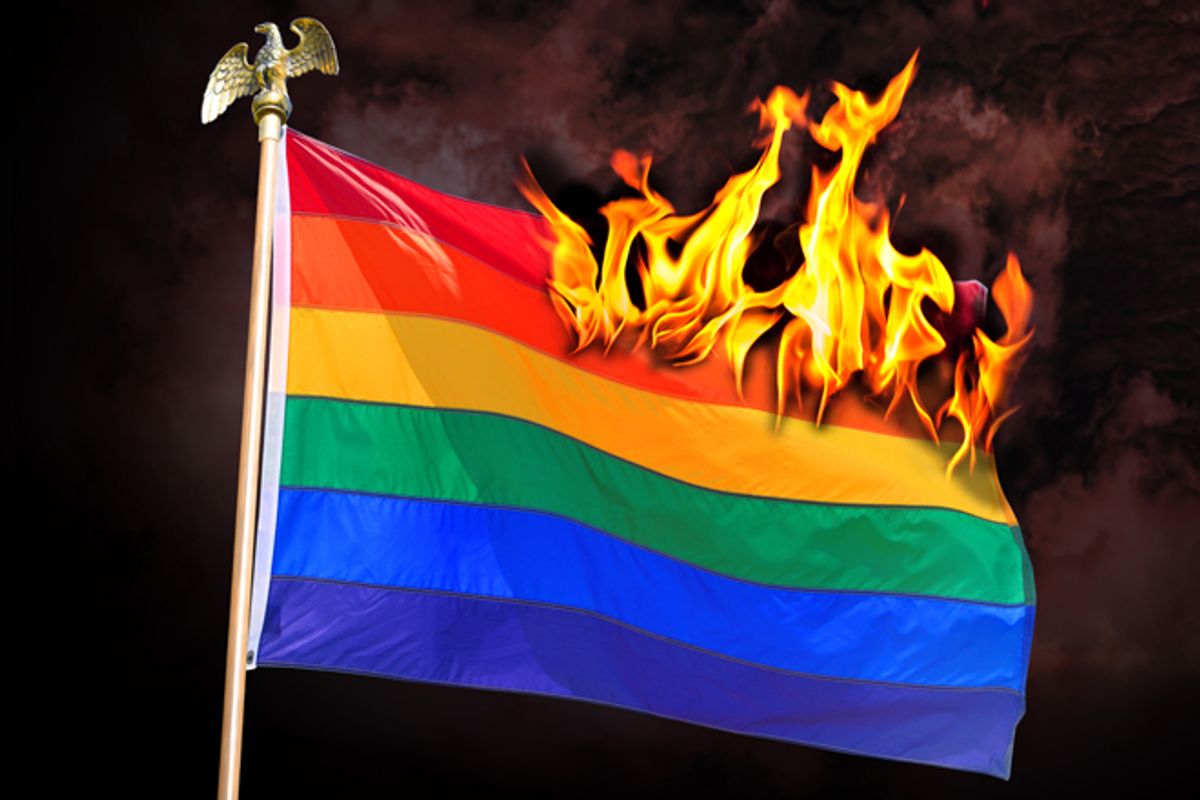 Here is one of those odd regularities that crop up in American politics: Every election year since at least 1996, about a quarter of gay voters (more precisely, of voters who acknowledge being gay in exit polls) have pulled for the Republican presidential candidate, rain or shine.

This is not to say that the candidates or parties were alike. In 1992, Bill Clinton made a point of including gays in his campaign, while George H.W. Bush outsourced social issues to Patrick Buchananites and the religious right. In 2004, George W. Bush favored a constitutional amendment banning gay marriage; John Kerry opposed it (while opposing marriage equality).

Still, the real-world difference was depressingly small. We gay folks had to watch while Clinton signed the Defense of Marriage Act and a ban on openly gay military service. We did get a few symbolic scraps. A gay person appointed to an ambassadorship! A meeting with the president! Yippee!

It will be quite interesting to see what the exit polls show this year, because 2012 is different. For the first time, no spectrum of dreary grays. The colors are black and white. At last, gay voters have a choice, not an echo.

President Obama started slow on gay rights. He opposed marriage equality, dragged his feet on the military-service ban, and let the Justice Department file a brief defending DOMA that could have been written by his predecessor. But then he made up for lost time. He went out on a limb jurisprudentially by abandoning his legal defense of DOMA. He and the Democratic Congress got the military ban repealed. He used executive authority to provide some benefits for same-sex partners of federal workers. Above all, he came out this year in support of gay marriage — and, in its platform, his party did the same.

Then there is Romney. Whatever his attitude in private, his public posture has been that of a throwback. He opposes gay marriage and civil unions and favors a constitutional amendment banning same-sex marriage. That puts him where George W. Bush was in 2004 and, please note, several clicks to the right of Sen. John McCain, the 2008 Republican nominee, who opposed the constitutional amendment (as did Bush’s vice president, Dick Cheney). He says he hires without regard to sexual orientation but seems to oppose a federal non-discrimination law, much the same position that George W. Bush took in 2000. (He hired an openly gay foreign-policy spokesman, but the guy lasted less than two weeks.) He opposed repealing the military ban, although he says he would not revisit the decision. His running mate and his party’s platform promise to defend DOMA.

Perhaps most significant, Romney remains on the pre-1960s side of the cultural divide separating those who are comfortable with gay people and issues from those who squirm. He avoids gay issues. He avoids using the G-word. It was not ever thus: Romney claimed to be more staunchly for gay rights than Ted Kennedy when he challenged Kennedy for the Senate in 1994. The revised and edited Romney, however, uses both words and demeanor to convey comfort with the closet.

No wonder that, when I called them recently, the Log Cabin Republicans, the leading (and long-suffering) gay Republican group, had not yet decided whether to endorse the presidential candidate of their own party. When I asked R. Clarke Cooper, the group’s executive director, why a gay voter might conceivably support Romney, he turned the conversation to jobs.

He made another point, though, that deserves notice. “We have reached a new stage,” he says of Republicans. It may not be visible on the national level yet, but younger Republican politicians have begun to break ranks -- in the South as well as in places like California and New York. Republican state legislators provided critical votes for gay marriage in New York and Maryland. Log Cabin, says Cooper, now enjoys regular access to Republican councils, even if it rarely gets what it wants.

So are Republicans moving? Or are they stuck? The answer is: both.

In moving as decisively as they have on gay rights, the Democrats are following the country. As recently as 2004, according to Gallup, 54 percent of the public thought same-sex relations were morally wrong, versus 42 percent saying they were morally acceptable. The converging lines met in 2008, however, and never looked back. This year, the 2004 numbers are precisely flipped; 54 percent morally approved of homosexuality, only 42 percent disapproved.

Moral disapproval undergirds the entire superstructure of anti-gay discrimination. Its melting away represents a fundamental reordering of gay Americans’ relationship with their country. It is now we — gays and our supporters — who are the moral majority.

But the dissenters have not vanished. Rather, they have holed up inside the Republican Party. According to polling by the Pew Research Center, two-thirds of Democrats and almost 60 percent of independents call same-sex relations morally acceptable; only a bit over a third of Republicans agree. White evangelicals, in particular, are unique among major demographic and religious categories (including Catholics) in their fierce disapproval of homosexuality, and these days the vast majority of them (70 percent, according to Pew) are Republican or lean Republican.

To put the matter bluntly, the Republican Party is becoming an isolated bastion of anti-gay sentiment. That is not because Republicans and conservatives are immune to the general trend toward acceptance of homosexuality. It is because the trend is slower among Republicans. And, perhaps more important, it is because anti-gay true believers have chosen to make their last stand within the party.

Anti-gay forces recognize their growing cultural isolation. They understand that they have lost the battle to keep same-sex marriage out of America and to maintain the pariah status of homosexuality. If they cannot hope to hold sway over the culture, however, they still have the numbers and zeal to hold sway over the party. An institutional base ensures their voice will be heard and their dwindling influence amplified. So the cultural right threatens to sit out elections where Republicans duck social issues; it targets Republican gay-marriage apostates and compromisers in primary elections; it pours money and energy into races where it can make examples of Republicans who stray.

The strategy of holding a political party hostage can work. It can work, in fact, for a long time. The National Rifle Association and the National Education Association have both used it successfully for decades to shut opponents out of their own political party (Republican and Democratic, respectively) and to frustrate majority support for policies they oppose (gun control and school vouchers). They have made the price of apostasy too high to be worth the gains. NOM, the National Organization for Marriage, hopes to be the new NRA; in 2012, it and the Family Research Council and others in their camp succeeded. Thus the weird phenomenon we see this year, when one party is changing with the times while the other closes its eyes and covers its ears.

How long can the national Republicans (as opposed to individual candidates) remain stranded in a past that abhors homosexuality before splitting their party and alienating their own kids? It depends on how far toward gay equality and gay marriage the country as a whole moves, and how many swing voters care about Republicans’ stance on gays. That, we don’t know yet.

We do know this: If any Republican in the 2012 field had the potential to lead the party away from its growing isolation on gay equality, it was Mitt Romney. By choosing instead to pander to the anti-gay right, he made gay voters’ choice easier, and Democrats’ future brighter.