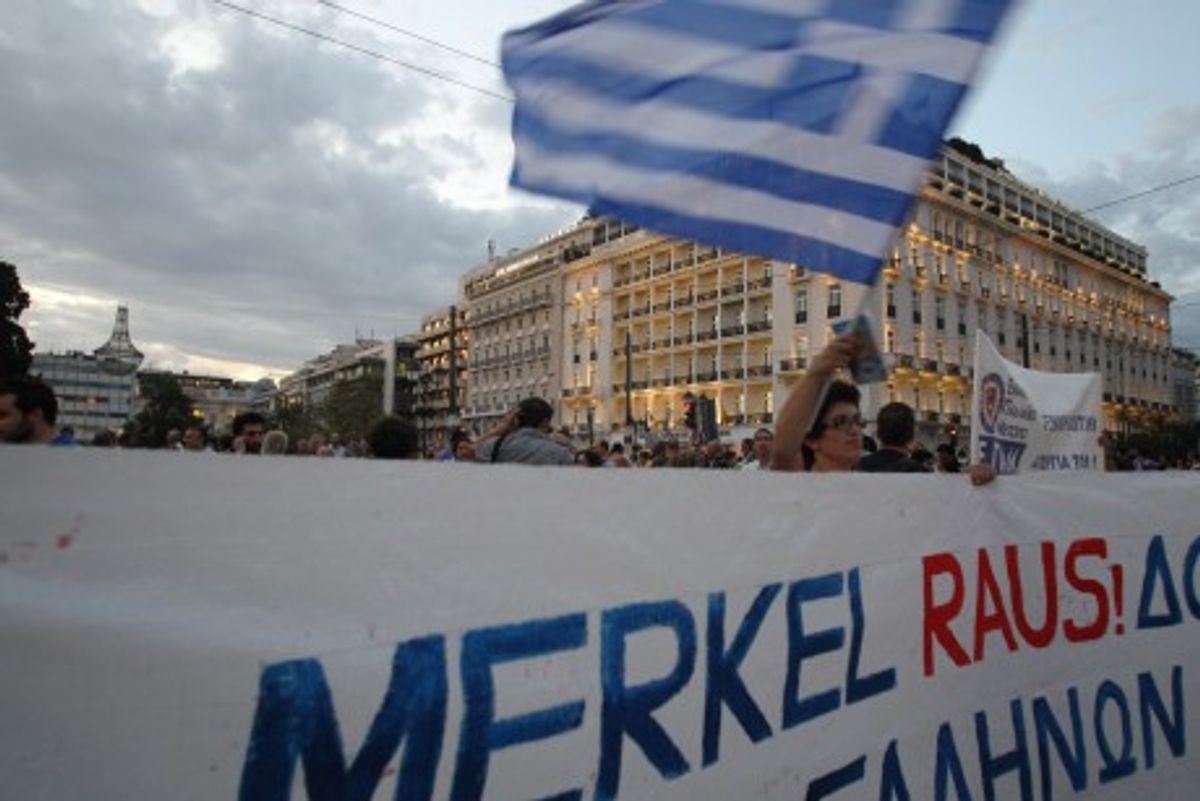 ATHENS, Greece—German leader Angela Merkel arrived amid draconian security measures and a mass protest in Athens Tuesday for her first visit to Greece since the Eurozone crisis began there three years ago. Her five-hour stop is seen by the Greek government as a much-needed boost for the country's future in Europe— but protesters view it as a harbinger of further austerity and hardship.

More than 7,000 police were on hand in Athens, cordoning off parks and other sections of city to keep demonstrators away from the German leader, who will hold talks with conservative Prime Minister Antonis Samaras.

As a helicopters buzzed overhead, thousands of protesters, chanting "History is written by the disobedient" gathered peacefully in front of Greek parliament, while one group of demonstrators burned a Swastika and threw it onto a police barrier.

"I have no doubt that (Merkel) has good intentions, and wants to help, but that won't solve Europe's problem," retired teacher Irini Kourdaki said.

Merkel will meet with Samaras and was also due to hold talks with President Karolos Papoulias before flying back out of the country.

At least 40 people were detained for questioning as police, even in unrestricted areas, stopped and searched pedestrians. Stiff security measures include a ban on public gatherings outside the German Embassy and other parts of central Athens as well as within 100 meters (330 feet) of her motorcade route from the airport.

The demonstrators included a group of special forces reservists, in uniform, who chanted "Merkel out of Greece" in time to their march.

"All the Greek people must rally together to rid the country of all those who oppress and humiliate us," Navy Seal reservist Giorgos Drakopoulos said.

Many of Europe's leading politicians have avoided official travel to Greece and the risk of a hostile reception, as the debt-saddled country struggled to keep up with commitments needed to guarantee rescue loan payments and long-term euro membership.

But Merkel, heading Europe's largest bailout contributor, accepted Samaras' invitation to Athens despite failure by his government so far to conclude a massive new austerity package.

Greece has depended on bailouts from Europe and the International Monetary Fund since May 2010. To get the loans, it has implemented a series of deep budget cuts and tax hikes, while increasing retirement ages and facilitating private sector layoffs.

However, Athens must pass further austerity measures worth (EURO)13.5 billion ($17.5 billion) over the next two years to qualify for its next rescue loan payment—without which the government will run out of cash next month. New cuts are set to further reduce pensions and salaries and increasing the retirement age by two years, to 67.

Debt monitors from the EU, IMF and European Central Bank, known as the troika, will deliver a report within coming weeks on whether Greece should receive its next bailout payment, without which it will go bankrupt.

After months of tough rhetoric, the German chancellor could be using her visit to prepare her own voters for a more tolerant approach toward Greece ahead of federal elections next year, according to Jason Manolopoulos, author of the 2011 book on Europe's financial crisis "Greece's Odious Debt."

"Given how some other members of the (eurozone) core—Austria, Holland, Finland—had made some very harsh comments ... I think it does send a message to Greece," Manolopoulos said of Merkel's visit.

"But I think it's also important, if not more important, for German domestic consumption."

Economist Martin Koehring, from the Economist Intelligence Unit, said Merkel wanted to underscore her commitment to keeping Greece in the 17-member eurozone, and make a gesture of support to Samaras' coalition government, in power since late June.

He added: "Mrs Merkel's visit is ... also likely to stress that, in addition to solidarity from its EU partners, the pressure to implement fiscal austerity and structural reforms will not be eased."