Harold C. Turner, Holocaust denier and FBI snitch, among other unwholesome titles, is out after three years in jail 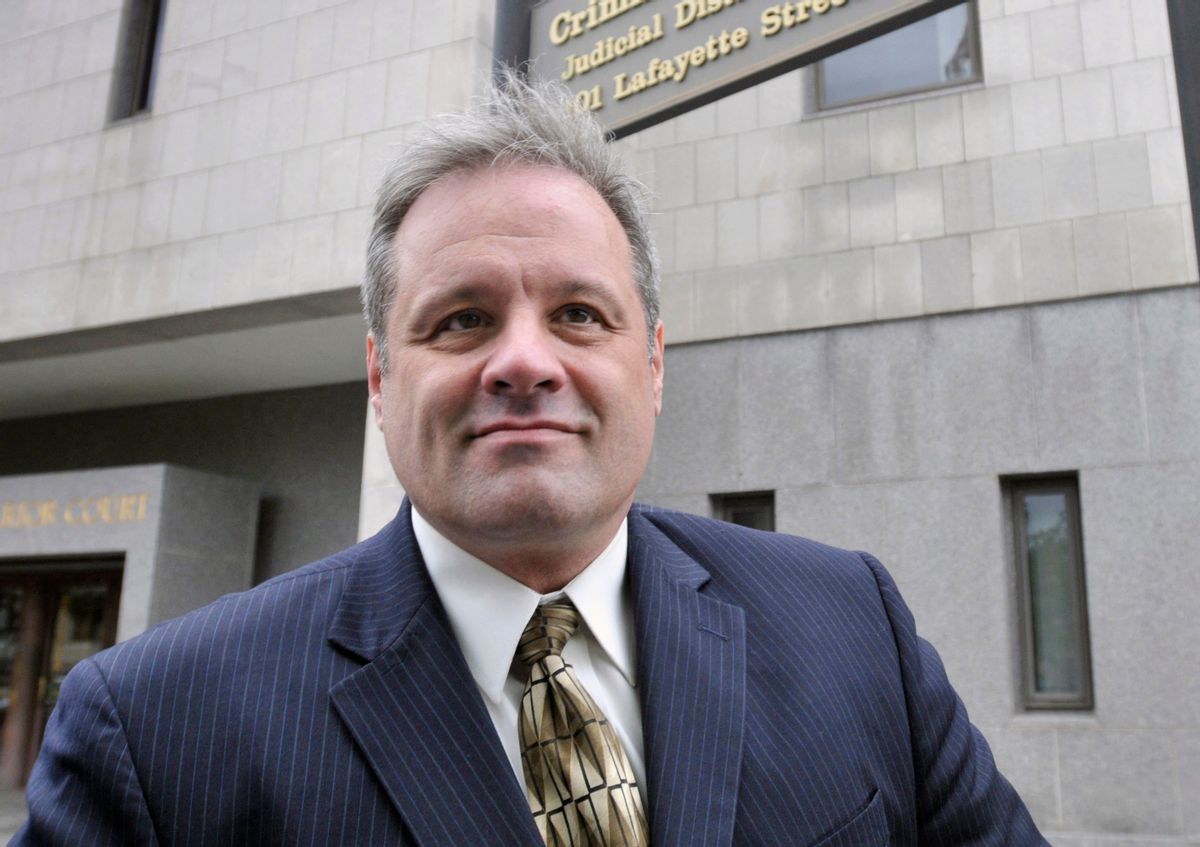 Harold C. “Hal” Turner, the right-wing Internet radio shock jock, racist, Holocaust denier, FBI snitch, lynching advocate and jailbird, is back home in his New Jersey condo after spending nearly three years in an Indiana prison cell for threatening three federal judges on his blog who had upheld a handgun ban in Chicago.

Just before being released from a Newark half-way house in pre-dawn darkness last Friday, Turner, 50, told the Herald News of New Jersey, “I think my actions, in defense of the country and working covertly for the FBI, prove I’m one of the good guys.’’

After a countless number of such incendiary statements on the radio, on his blog and at neo-Nazi-sponsored rallies from New York to Michigan, Turner finally went too far. On June 24, 2009, he was arrested and charged with threatening to assault and murder three federal judges. Turner had been seething over a decision in a Chicago appeals court that upheld a local handgun ban.

“Let me be the first to say this plainly,” Turner wrote on his blog on June 2, “these judges deserve to be killed.’’

“Their blood will replenish the tree of liberty,” he continued. “A small price to pay to assure freedom for millions.” The next day, Turner updated the post to include the names, work addresses, phone numbers and photographs of the judges.

It took federal prosecutors three trials before convicting Turner of threatening the judges. The first two ended in mistrials.

Turner’s defense argued that the First Amendment protected his speech. His racist rants and threats were part of his undercover work as an FBI informant, his lawyers said. All his talk of “dykes,” “Negro beasts” and "lynching machines" was a ruse, they argued, encouraged by his federal handlers to draw truly dangerous white supremacist out into the open.

“The vast majority of the things Hal said were nothing more than shock jock material,” Michael A. Orozco, the lawyer who represented Turner at his first two trials said today. “I don’t think he was a racist. He was doing a lot of those things at the behest of the FBI.”

“Hal likes to push people’s buttons,” Orozco added. “I don’t think he meant to cause those judge any harm.”

Turner worked as an informant for the FBI between 2003 and 2007, providing information on white supremacist groups for the same government he frequently railed against.

During opening remarks at Turner’s third trial, William R. Hogan, an assistant U.S. attorney, was quoted by The New York Times as saying, “Mr. Turner regards federal judges as domestic enemies who should be killed. He gets off on inciting others to violence.”

Indeed, a couple of weeks before Christmas in 2005, at a rally in Kingston, N.Y., that was planned by his fellow “good guys,” the neo-Nazi National Socialist Movement, Turner threatened a lynching campaign targeting blacks and Hispanics. “White people have a very nasty version of street justice,” he said. “If these crime problems are not settled by the black and Hispanic communities, rest assured we will get our ropes and we will solve them for you.”

Nazis, Klansmen and Turner had descended on Kingston after a black student assaulted a white student at the local high school in October. Turner and his buddies were convinced the incident was racially motivated.

Two years later, Turner was at it again. He organized what he called “Rally Against Black Gang Terrorism” in Kalamazoo, Mich., which was attended by a number of prominent white supremacist speakers.

Turner closed out the event by saying: “It is very rare in America today that a white man will stand in public and talk about lynching blacks, but I did that here today and if you think I’m kidding … I want you to bear in mind that the reason the city put up these fences and called in all these cops was not to protect us from you [black counter-demonstrators]. It was to protect you from us.”

In February 2008, realizing that then presidential-candidate Barack Obama had a real shot at winning the White House, Turner’s response was to write on his blog about Obama’s assassination. “I’m starting to come to the realization that it may be up to a sole person, acting alone, to make certain this guy is never allowed to hold the most powerful office in the world,” he wrote.

Turner later took down the remark.

The fallen shock jock was picked up from a halfway house by his wife, Phyllis, and his son and taken to their condo in North Bergen. He will spend the next six months under house arrest, according to the Herald News, which added that he would be allowed to leave his home for church, medical and legal reasons, and to work.

He is barred, however, from participating in Internet or satellite radio programming for the next three years.

Turner told the newspaper that he stands by “every word I wrote” and expects to be vindicated on appeal. “I did not threaten anybody,” he said. The paper said a federal appeals court in Manhattan is due to rule on his case soon.

Turner also told the paper that he would like to return someday to the media world, perhaps as a television commentator. And he talked about his experiences behind bars at the Federal prison in Terre Haute, Ind. “There is constant and real danger in federal prison,” he said. “It is not Club Fed. Many guys refer to Terre Haute as gladiator school. Violence can happen there in a sudden and explosive manner.”

It sounds like the inmates were reading Turner’s old blog posts.

“Don’t think I’m talking out of my ass either,” he wrote in a 2007 post attacking then Senate Majority Leader Harry Reid for his positions on immigration. “The last time I focused on a federal official like this, it was U.S. District Judge Joan Humphrey-Lefkow of Chicago. I commented on my show that one of her rulings made her worthy of being killed. Some time later, someone broke into her home and slaughtered her mother and husband.”

It turned out that the killer was angry at Lefkow for other reasons and had not been inspired by the shock jock’s comments. But that didn’t stop Turner from exploiting the murders to instill fear in the hearts of his many, many enemies.