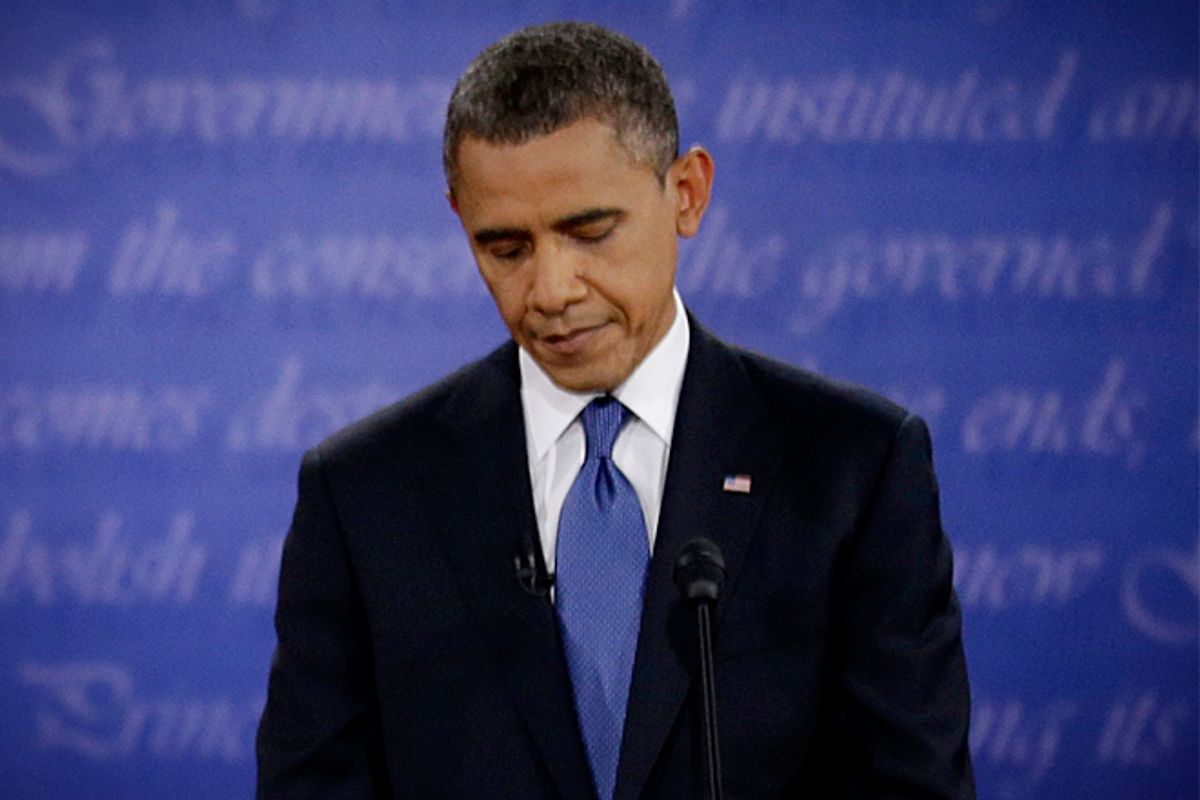 Take a breath and relax for a moment, liberals. Already, it looks like Mitt Romney’s bounce in the polls following last week’s debate is receding. Polls taken on Thursday or Friday of last week are universally bad for President Obama, but, as many analysts have pointed out, many of the polls taken after Saturday show the bounce diminishing and Obama’s slight lead returning.

That infamous Pew poll on Monday, which showed Romney leading by 4 points, surveyed just 155 people on Sunday, meaning it was disproportionately weighted to the three days immediately following the debate. Increasingly, it seems the Pew poll was an outlier, as sometimes happens for even the best polling outfits, so we shouldn’t jump to conclusions based on it just yet. To get an accurate picture of the current landscape, we’ll have to wait until the two or three days following the debate wash out and new polls show voter sentiment beginning Sunday or Monday of this week, which should also account for last week’s strong jobs numbers. The new Gallup tracking poll out today has more evidence that Obama's numbers are stabilizing, with a one point boost putting him 5 points ahead of Romney among registered voters and tied among likely voters.

There’s also some panic about the the gap between likely voters, those who are more enthusiastic about voting, and all registered voters. Newer polls show Romney performing about 5 points better among likely voters than registered voters, and ahead of Obama in several surveys among the more committed subset. This has led pundits to fear that an enthusiasm gap will keep Democrats from coming to the polls. But as TNR’s Nate Cohn points out, the polls did the same thing four years ago: A large gap of about 6 points between likely and registered voters shrunk to a small one of just a couple of points by Election Day. Meanwhile, in all-important Ohio, a new CNN poll out Tuesday shows Obama maintaining his lead, if diminished. Romney would have an extremely difficult time winning without Ohio.

To some degree, we should have been expecting this. As the National Journal’s George Condon Jr. noted before the debate, challengers almost always beat incumbents. In the six times a sitting president has debated a challenger since 1976, the challenger was perceived as the winner every time, except for in 1996, when Bill Clinton beat Bob Dole (it was Bill Clinton, after all). The combination of high expectations and overconfidence from being surrounded by aides who don’t dare question the commander-in-chief gives presidents the difficult task of hitting a higher bar they are almost by definition unprepared to reach. “I think the incumbent is -- unless he drops a bomb on the other fellow -- is going to automatically be tagged as not having done well because he didn’t destroy somebody,” Ronald Reagan said after a terrible debate performance against Democrat Walter Mondale. “I look back now at the times in debates when I wasn’t the incumbent and never realized how easy it was to be on the other side,” he added.

Nate Silver ran the numbers and found this phenomenon to be reflected in the polls as well. Challengers more often than not gain a few points from debates. But this bounce often fades fairly quickly. John Kerry trounced George W. Bush in their first debate, as did Al Gore, but we can’t ask President Kerry or Gore about their thoughts on the importance of winning their first debates.

And besides, the polls were always going to close and the race was always going to tighten as we got closer to Election Day. Obama, overseeing an economy with unacceptably high unemployment and slow economic growth, had no right to be ahead by almost 10 points over a challenger. It was only Mitt Romney’s ineptness that made the gulf as wide as it was before the debate. The expectations had been so lowered for Romney that when he showed up at the debate hall and came across as competent and not a cartoonishly evil rich person, the race experienced a sharp correction and returned to its natural state, with Obama ahead very narrowly. Obama advisers, even in the heady days of September, have always said they expected a very tight race.

The president’s too-big lead was like a Wall Street bubble that had to pop eventually. And it’s understandable that when it did, liberals were shaken -- but the panic is troubling. There was actually a small spike in people Googling “move to Canada” on debate night last week. But fortunately, unlike a Wall Street bubble, a campaign’s health isn’t determined exclusively by the confidence of its investors and supporters, because then Obama would be in real trouble. Liberals are a famously skittish bunch who seem eager to bail on a candidate at his or her first sign of trouble. Republicans, on the other hand, stood by Romney (often grudgingly) during months of losing and nonstop humiliation. It’s difficult to imagine Democrats doing the same for Obama, given the eagerness to tear out hair after one lousy debate performance.

Going forward, it’s safe to expect something better. Reports indicate that Obama immediately realized his terrible error last week and is preparing to come out of the gate swinging at Romney in the next debate. “This is on me,” Obama told advisers on a conference call, according to the New York Times. “It wasn’t Kerry ... Kerry was fine,” Obama said, referring to John Kerry who played Romney in prep sessions. Despite plenty of legitimate criticisms of Obama's record over the past four years, one thing he’s proven is that he can perform well under pressure when his back is against the wall and even friends have abandoned him. He seems to actually be at his best when the odds are stacked against him, so it’s reasonable to assume he’ll come into the next two debates understanding what he needs to do and with the energy -- something sorely lacking from round one -- to do it.

Meanwhile, in the next debates, the tables will be turned a bit and it will be Romney who may come in with the problems usually reserved for incumbents -- high expectations and overconfidence. Pundits left, right and center praised his performance in the first debate and his numbers in post-debate polling were the best on record. After Obama’s dismal performance, Romney will now be the favorite who has to meet the higher bar. And, as Matt Yglesias wrote on Twitter, “If Obama's still winning after a bad debate, isn't that terrible news for Romney? He's running out of events that could give him a lead.”

That said, it’s likely Joe Biden will stumble in tomorrow’s debates and there’s a huge wave of super PAC money about to come. If Obama fails to deliver in the final debates, you have permission to panic.