A century and a half later, we've come full circle: The red-blue state divide falls along Confederate-Union lines 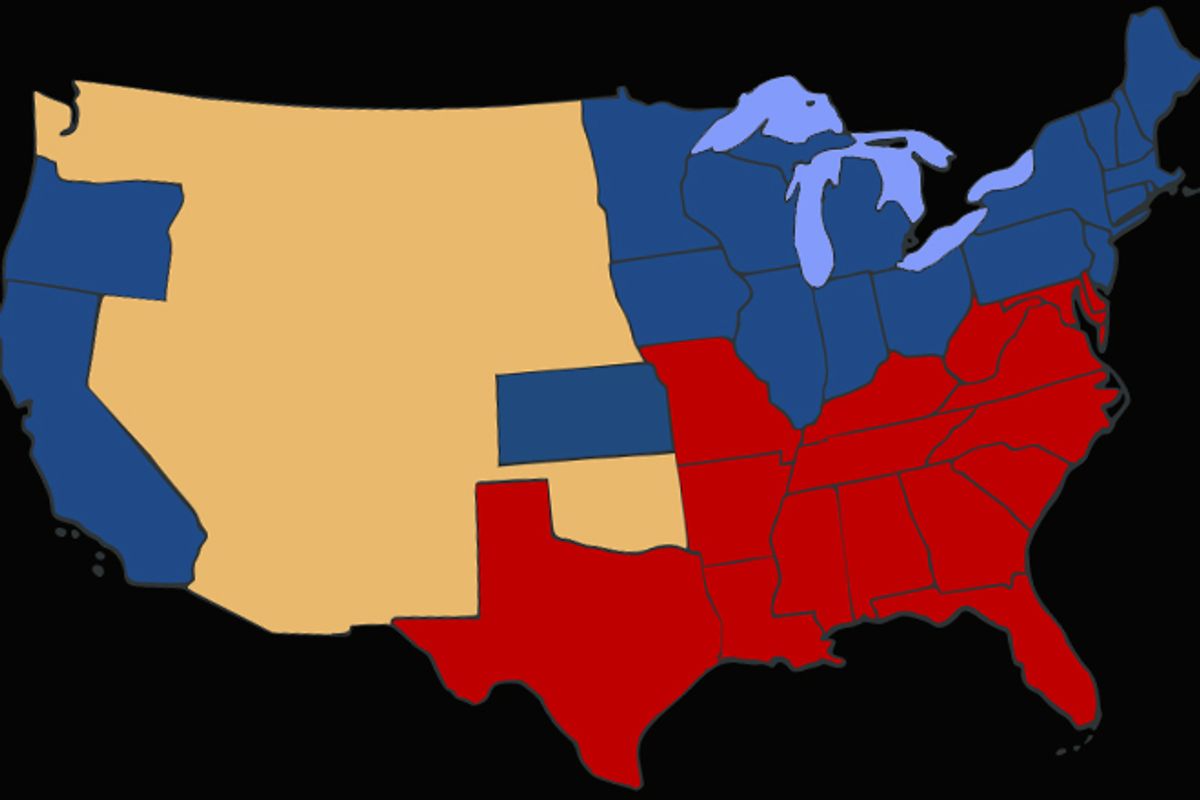 Every now and then someone highlights the overlap between today’s Republican states and the slave states of the former Confederacy.   As clichéd as the point may be, it remains indispensable to understanding what is happening in American politics today:

The core of today’s Democratic Party consists of the states of New England and the Great Lakes/Mid-Atlantic region that were the heart of the Union effort during the  Civil War.  The core of today’s Republican Party consists of the states that seceded from the United States and formed the Confederate States of America.Don’t be misled by the contemporary red state-blue state map, which makes the mostly red Prairie/Mountain states look as important in the Republican coalition as the South.  A cartogram that shows states by population is far more accurate:

As the cartogram shows, in terms of population and votes the South vastly outweighs the thinly populated Prairie/Mountain states, even though the latter get disproportionate representation in the U.S. Senate and the electoral college.  The cartogram provides a pretty good reflection of the situation perceived by conservative white  Southerners, by depicting a besieged South encircled and on the verge of being crushed by multiracial, polyglot, immigrant-friendly, secular humanist, progressive Blue America.

Now that they dominate the Republican Party, Southern conservatives are using it to carry out the same strategies that they promoted during the generations when they controlled the Democratic Party, from the days of Andrew Jackson and Martin van Buren to the civil rights revolution of the 1950s and 1960s.  From the 19th century to the 21st, the oligarchs of the American South have sought to defend the Southern system, what used to be known as the Southern Way of Life.

Notwithstanding slavery, segregation and today’s covert racism, the Southern system has always been based on economics, not race.  Its rulers have always seen the comparative advantage of the South as arising from the South’s character as a low-wage, low-tax, low-regulation site in the U.S. and world economy.  The Southern strategy of attracting foreign investment from New York, London and other centers of capital depends on having a local Southern workforce that is forced to work at low wages by the absence of bargaining power.

Anything that increases the bargaining power of Southern workers vs. Southern employers must be opposed, in the interest of the South’s regional economic development model.  Unions, federal wage and workplace regulations, and a generous, national welfare state all increase the bargaining power of Southern workers, by reducing their economic desperation.  Anti-union right-to-work laws, state control of wages and workplace regulations, and an inadequate welfare state all make Southern workers more helpless, pliant and dependent on the mercy of their employers.  A weak welfare state also maximizes the dependence of ordinary Southerrners on the tax-favored clerical allies of the local Southern ruling class, the Protestant megachurches, whose own lucrative business model is to perform welfare functions that are performed by public agencies elsewhere, like childcare.

The Southern system is essentially about class and only incidentally about race.  That is why, following the abolition of slavery, the Southern landlord elite exploited black and white tenant farmers and child workers indifferently.  Immigrant workers without rights to vote or organize unions have always appealed to the Southern employer elite.  After the Civil War some Southern landlords experimented with bringing in indentured servants or “coolies” from  Asia, until that form of unfree labor was banned by Congress in the 1880s.  Today many business-class conservatives from Texas and other Southern states, such as former Texas Sen. Phil Gramm, champion “guest-worker programs,” which would bring in Mexican nationals and others to work as indentured servants in the South, while forbidding them to become U.S. citizens with legal and voting rights.

White supremacy was never an end in itself, but a tactic used by the Southern oligarchs to divide white workers from nonwhite workers.  But the Southern elite can dispense with racism, because it has never cared what color its serfs are.  Indeed, in the 17th century Southern planters initially experimented with white British and European indentured servants as farmworkers, before trying black slaves, who were easier to identify if they ran away.  In theory, in a truly post-racist South, a multiracial Southern oligarchy could lord it over an underpaid, vulnerable and equally multiracial Southern regional majority.

The traditional Southern regional economic strategy, then, depends on the control by Southern employers of a huge pool of low-wage workers with little or no bargaining power in their dealings with their local bosses or the foreign (that is, extra-Southern) investors and corporations who are invited in to exploit their labor.  This regional economic strategy can succeed only if the power of the Southern employer class over Southern urban and rural workers is protected from political and legal interference from outside the South and within.

Protecting the prerogatives of the Southern economic elite and the politicians it owns from external interference is the rationale for the defense of states’ rights, in the 21st century as in the 19th and 20th.  While they demonize “the federal government” as though it were some external force, Southern conservatives are actually afraid of democracy — national democracy.  They are afraid of their fellow Americans outside of the region they control.  They are afraid that national majorities will impose unwelcome reform on the South, at the expense of their profits and privileges, as national majorities did during Reconstruction, the New Deal and the civil rights revolution.

The Southern system is also threatened by internal democracy.  The Populist movement of the late 1800s, which in some cases united white and black Southerners in the cause of reform, terrified the white Southern establishment.  By World War I many Southern states had adopted variants of the “Mississippi system” of disfranchising all of the black and up to half of the white population, by means of poll taxes, means tests and other devices, ensuring that elections in the South would be dominated by upper-income voters.  The purpose of the “voter ID” laws pushed by today’s Dixified Republican party is similarly to prevent lower-income citizens from voting.

Southern conservatives are sometimes accused of being hypocritical in denouncing the federal government even as their states take a disproportionate amount of federal military and civilian subsidies.  But that isn’t hypocrisy; it’s cunning.  As long as the local Southern oligarchs control how the federal money is spent in their region, they have no objection to massive restribution from Yankeeland to Dixie.  Plans like Romney’s and Ryan’s for block-granting federal subsidies support the self-serving strategy of the Southern elite:  federal funding but regional control.

Note that throughout this essay I have used the phrases “Southern establishment,” “Southern oligarchy” and “Southern elite.”  All too often outsiders treat the victims of the Southern oligarchy — the majority of white and black and Latino Southerners — as though they are to be blamed for their misfortune.  Unfortunately, many northern progressives are snobs who would rather sneer at the manners and lifestyle of the Southern white working class than mobilize to defeat the Southern elite, which tends to be well-educated, well-spoken and well-traveled.

What about the future?  Theorists of a “new majority” at the national level may be vindicated, if this year the Democrats win the popular vote for the fifth times in six consecutive elections.  If Texas, the powerhouse of Southern electoral votes, shifts from red to blue in the next generation or two because of demographic change, that would further ghettoize Dixie conservatives.  Gerrymandering can delay the inevitable decline of influence of white Southern conservatives in the House of Representatives, but cannot stop it.  As before the Civil War, the Senate may be the last redoubt of the Southern right, but only as long as it can find enough allies among the low-population states of the prairie and mountain regions.

But the former slave states could triumph even as they went down, if the demise of the traditional South were to be accompanied by the Southernization of the American economy and political system.  It is all too easy to imagine a United States that combines anti-racist, feminist and pro-gay attitudes with an economic strategy based on luring foreign investment with the help of low voter turnout, low wages, weak unions and foreign guest-worker programs, together with an inadequate welfare state dominated by state governments, private vouchers and tax-favored religious charities.  A nationalized Confederacy with progressive trappings would be all too reminiscent of today’s America.