In the vice-presidential candidate's bizarro universe, some rapes are worse than others and abortions are never OK 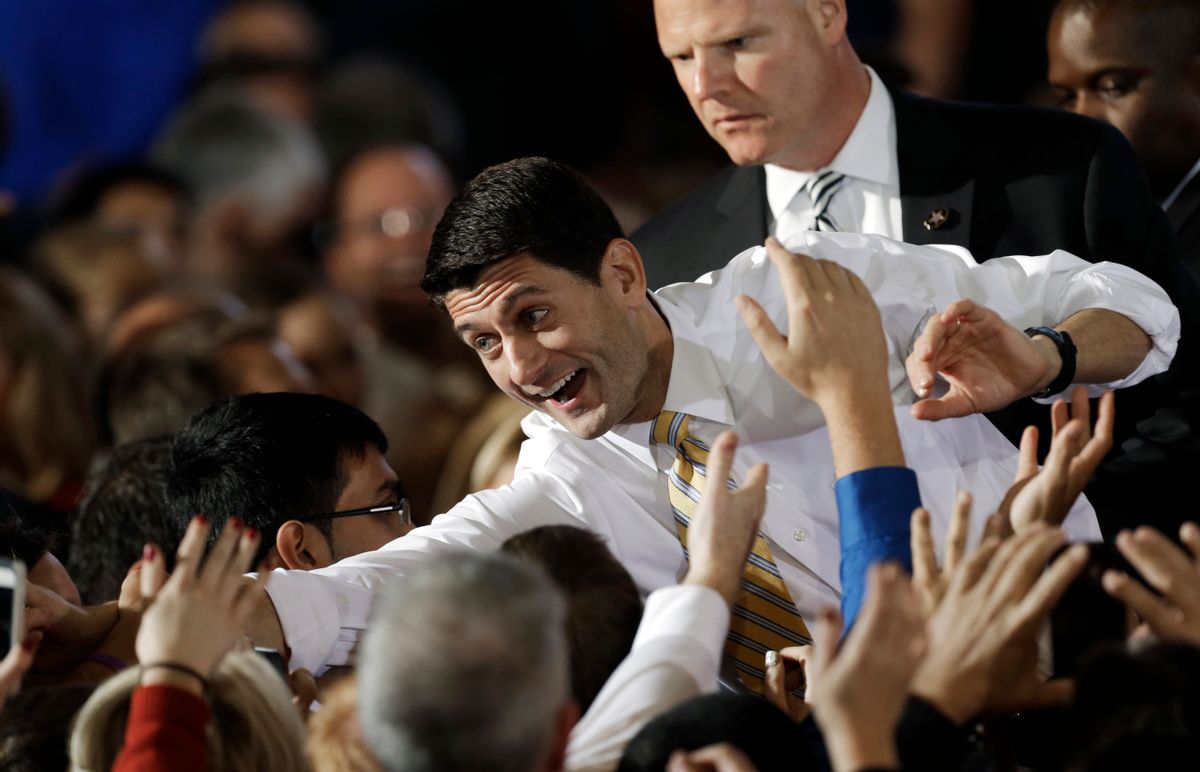 While Mitt Romney’s defining quality seems to be his inability to define any consistent viewpoints on the driving issues of the day, Paul Ryan is running on a pretty clear and consistent record.  And unlike Romney, who changes his stance according to his audience, Paul Ryan has clung to extremely unpopular ideas even in the face of public backlash.

Of course, now that he’s the GOP candidate for vice president, Paul Ryan insists that Romney’s views are the ones driving their swerving, accident-prone limousine of a campaign — but since Paul Ryan is in the running to be a heartbeat away from taking the wheel, we shouldn’t lose sight of his vision for America.

1. Some rapes are worse than others

Ryan co-sponsored legislation with Missouri congressman and now Senate candidate Todd Akin that would narrow the legal definition of rape to "forcible rape."  Ryan has since walked back this vote since being nominated for vice president and in the wake of the controversy surrounding Akin’s "legitimate rape" comments, but he didn’t bother clarifying his position before the controversy swelled.  The narrowing of the legal definition of rape was in the original version of H.R. 3 — the third piece of legislation introduced this year by the Republican-led House of Representatives, ahead of bills to, say, create jobs or solve the foreclosure crisis.  The bill, dubbed the “Let Women Die Act” by women’s advocates, "allowed hospitals, clinics, and even doctors to refuse not only to provide an abortion even in cases where the woman would otherwise die, but also to allow them to refuse to refer her for emergency care."

2. Abortions are not OK, ever

Along the lines of the “Let Women Die Act,” Ryan has made clear in vote after vote and statement after statement that he does not support abortion in any situation, even to save the life of the pregnant woman.  Unlike Mitt Romney, who has flip-flopped all over the place on the issue of choice, Ryan has at least been consistent. He has bragged to the far right of his party that he is "never going to not vote pro-life" and, as just one example of that commitment, in 2006 co-sponsored legislation to require doctors to tell women that a fetus could feel pain at 20 weeks and advising medication for the fetus to stop its pain during an abortion — a measure intended to emotionally intimidate women seeking abortions.  Ryan also co-sponsored extremist legislation to give “personhood” rights to unborn fetuses.  Anti-choice advocates have barely concealed their excitement that Paul Ryan is on the GOP ticket.

3. Social Security is going bust and the only way to save it is to ... destroy it

Before even his own party shot his plan down, Paul Ryan was very explicit about wanting to privatize Social Security.  Ryan has called Social Security a “Ponzi scheme,” and when George W. Bush was president, Ryan pushed a privatization agenda that was even too extreme for Bush.  Had Ryan succeeded, Social Security would have been bankrupted by the recent financial crash.  Yet despite this and broad public opposition, Ryan has continued to advocate privatization while insisting that his plan’s broad lack of popular support is due to marketing problems, not flaws with the plan itself.   Still, most Americans oppose changes to Social Security and actually support raising taxes to keep the program solvent for future generations.

4. Tax cuts for the wealthy will fix the deficit

And after all this, you would think that Paul Ryan is at least authentic in his aspiration to cut the deficit.  But you would be wrong.  Ryan’s House budget plan would actually raise taxes on the middle class but cut taxes for millionaires and billionaires.  Middle-class married couples could owe as much as $1,300 more under Ryan's plan, while those earning more than $1 million a year could see a $290,000 cut.

And ... according to my colleagues at Fox News, Ryan’s budget would not cut the deficit but actually increase government spending!  In other words, Ryan’s plan is extremist social engineering to cut programs that help the poor, increase giveaways to big business and the rich and make the middle class shoulder even more of the responsibility — all masquerading as deficit cutting, which it’s not.  And while Romney insists his plan is different but hasn’t spelled out the details so analysts can fully evaluate it, in the broad strokes Romney has outlined, it seems to mirror Ryan’s skewed priorities.

5. The best government is ... small enough that you can drown it in a bathtub

If Grover Norquist -- he of the immortal "bathtub" quote -- were going to take a male lover, it would be Paul Ryan.  When the CBO projected the impact of Ryan’s Republican budget proposal’s over the next four decades, it found that government would be cut to its smallest level since 1950.  According to an analysis by the Washington Post, Ryan would cut 40 percent from transportation, 40 percent from education and training, 30 percent from “income security” programs for the poor.  As Derek Thompson pointed out in the Atlantic, if you project forward Ryan’s defense spending plans, he would cut 91 percent from all other non-discretionary spending.  No, that is not a typo.

In other words, not only would Ryan virtually eliminate for future generations the sorts of government spending that built the railroads and highways that built his own family fortune, but Ryan would drown Head Start programs and scientific research and pollution control and, well, basically everything but the military. Oh yeah, and Ryan’s plan would kill at least 4.1 million American jobs.

At this week’s vice-presidential debate, America gets to focus on the man who wants to be a heartbeat away from the presidency.  Perhaps Paul Ryan will try to do what Mitt Romney did during his first debate with President Obama, to deny every extremist policy he’s previously embraced.  And yet while Mitt Romney is mostly running on rhetoric, Paul Ryan has a very clear — and very alarming — record.  Ryan should be forced to defend that record, not allowed to squirm away from it.