Forget Mitt's move to the center. He still has the backing of religious extremists and sexual fundamentalists 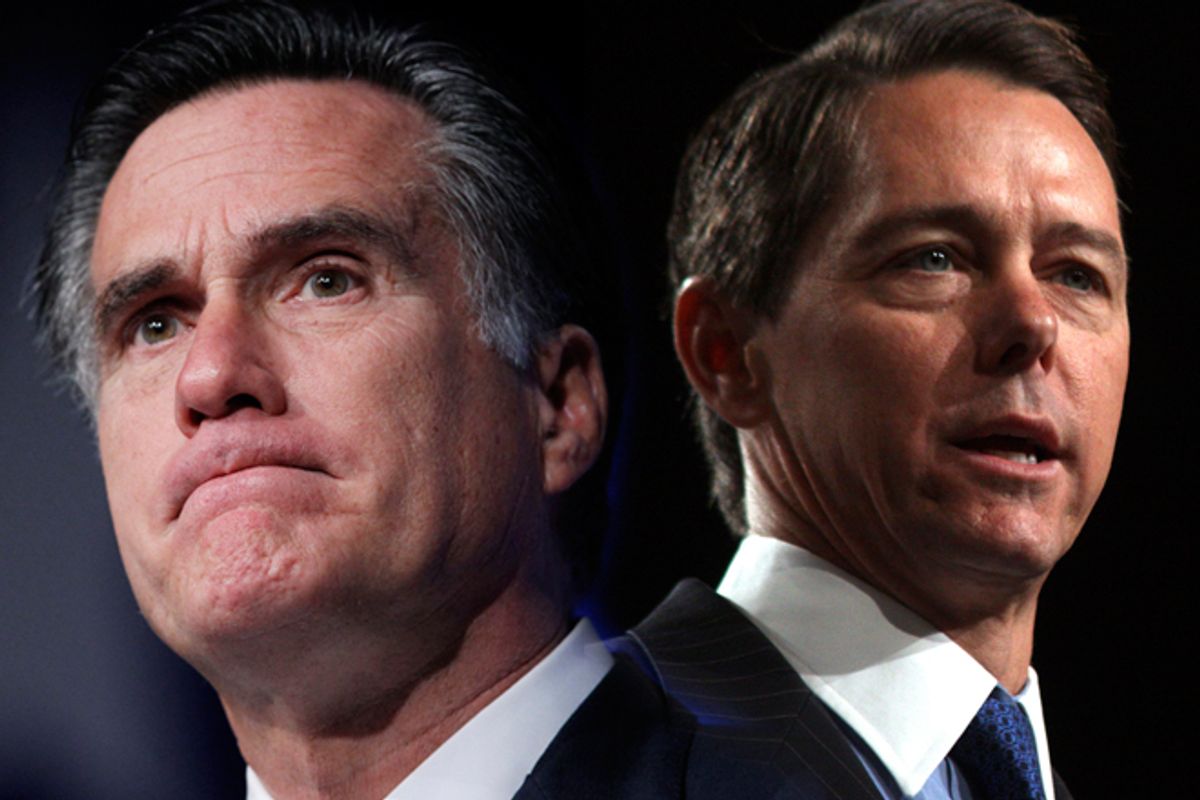 Nine months ago, Jim Garlow, an evangelical pastor and leader of California’s anti-gay marriage initiative, called Mitt Romney “untrustworthy” and “not visceral on the issues that are cardinal to me.” It was a sentiment shared widely among religious conservatives.

On Sunday, Garlow stood in his San Diego pulpit and told his flock he was voting for Romney. "I did make an endorsement," he later said by way of explanation. In backing Romney he was simply "endors[ing] Biblical principles." More than 1,000 other right-wing preachers Garlow had organized to participate in “Pulpit Freedom Sunday” did likewise.

Evidently they're not taking Romney's late pivot to the moderate center too seriously. And why should they, when the candidate tells the Des Moines Register on Tuesday, “There’s no legislation with regards to abortion that I’m familiar with that would become part of my agenda?” and then only a few hours later pledges to The National Review that “he would of course support legislation” limiting abortion?

Which one of these guys is the "real Romney"? It scarcely matters. He and his campaign are tied to some of the most wild-eyed sexual fundamentalists and religious extremists in the country. They have his ear now and they'll have it if he wins. Many, like Garlow, are mobilizing votes for him. And they'll expect -- demand -- that Mitt drop the moderate schtick once in office.

Consider just a few of Romneyland's big-name zealots, and ask yourself how likely it is that abortion -- or birth control or reproductive health in general -- will remain off Mitt's "agenda." Touted as “God’s right-hand man” in his heyday at Pat Robertson’s Christian Coalition, Reed was inplicated in the Jack Abramoff scandal and sat out the 2008 election in disgrace. Reed is back from political purgatory, now heading the Faith and Freedom Coalition.

Greatest hits: Whenever the religious right is down, count on Reed to resurrect it. How does he do it? Money, check. Strategic smarts, check. Republican desperation, check.  Think of a time when the GOP has been declared dead—say, 1992 or 2008—and two years later you’ll find Reed, eternally young and twinkly-eyed, standing in the shadows behind a victorious Republican Party.

Role in Romneyland:  Reed boasts that his Faith and Freedom Coalition has $12 million in donations on hand and will target 17 million religious conservatives to vote Republican. Donors include Foster Friess, of aspirin-betwixt-the-knees fame.

Say, what? “Ralph Reed is doing a great job here with the Faith & Freedom Coalition. This is going to make a big impact across America and I appreciate the work you are doing here.” – Governor Mitt Romney Greatest Hits:  In 1992, George H. W. Bush and Republican feminists—yes, you read that right--tried to amend the GOP’s extreme anti-abortion platform plank to include a rape, incest, and health exception. Buchanan worked with Phyllis Schlafly and other sexual fundamentalists to crush it.  Bay’s verdict on that year’s GOP convention, which adopted that platform and featured her brother Pat, whose campaign she managed, declaring Holy War on half the nation? “None of the big tent garbage.”

Role in Romneyland: Frequently hits the talk shows to defend Mitt and refute the claim that there’s a GOP “war on women.”Say, what? Was for Mitt’s “47 percent” comment before Mitt was against it; said the sexual revolution made women act like “alleycats.” Greatest Hits: McDonnell, like Reed, is a master of reinvention. At the tender age of 35, McDonnell wrote a thesis at Pat Robertson’s university in which he said that working mothers were “detrimental” to the family and called for an end to no-fault divorce.  During his 2009 gubernatorial race, McDonnell claimed he had changed. And then he strode into office, stripped gay state employees of protection against discrimination, signed a mandatory ultrasound bill, and intimidated the state health board into imposing onerous regulations on Virginia’s abortion clinics.

Role in Romneyland: That America knows anything about transvaginal ultrasound wands is a big reason why McDonnell will not be debating Joe Biden on Thursday night. Still, the governor remains an important Romney supporter. Should he help turn Virginia red, expect a high-level appointment.

Say, what? What came out of Roe v. Wade and Griswold v. Connecticut, McDonnell wrote, was “the perverted notion of liberty that each individual should be able to live out his sexual life in any way he chooses without interference from the state.” Greatest Hits: Bork was appointed to the Supreme Court by Ronald Reagan. Having clearly expressed his intent to overturn Roe and Griswold and his opposition to many  civil rights laws, Bork was rejected by the Senate on a bipartisan vote. He’s resented it ever since. Glendon, a Harvard law professor, Glendon is also the founder of a Catholic antiabortion group, Women Affirming Life. In 1996, at the Beijing Conference * where Hillary Clinton famously declared women’s rights to be human rights, Glendon led the Vatican delegation that dissented from the majority report because it endorsed access to birth control.

Role in Romneyland: It’s unclear whether the Justice Advisory Committee has a role other than to signal to the GOP base that Roe will go and DOMA will stay if Romney has his way with the Supreme Court. Glendon has been more proactive on the campaign trail than Bork. She cut a video for Romney lauding him for vetoing the morning-after Pill for rape victims when he was Massachusett’s governor.  She wrote Wall Street Journal editorials—without disclosing her connection to the Romney campaign—condemning the contraception mandate in Obamacare. Who: Soon-to-be-retired director of the Southern Baptist Convention’s Ethics and Liberty Commission, thanks to his plagiarism of a racist screed on the Trayvon Martin case.

Greatest Hits: After two events at the George H. W. Bush White House that included gays and lesbians, Land said to Bush “the active courting of the homosexual lobby by your administration goes far beyond any argument of being president of all the people.” One of the occasions was the signing of the 1990 Hate Crimes Act, to which representatives of groups protected by the bill were invited. “The president’s position,” according to a staffer, “was that it would be hateful and wrong not to invite someone because of their homosexuality. That’s what the bill was all about and what it was supposed to counteract.”

Role in Romneyland: Little remembered during this year’s “Anyone but Mitt” GOP circus was that Romney was the sexual fundamentalists’ man in 2008—that is, until Pastor Mike Huckabee stole his thunder. At a 2006 meeting between Romney and evangelical leaders, Land encouraged the would-be candidate to pursue the religious right vote. Romney’s team decided after that meeting to “dive right.” In 2011, Land gave Romney much the same advice, telling him that the Tea Party was full of social conservatives and not to downplay abortion and gay marriage. But this time Romney ignored him. Apparently, Land did not appreciate the snub. In January, he said Romney “was not Mormon enough” on abortion to win over social conservatives.

Still, Land is a realist, and when Romney was on the verge of victory, Land told Santorum to exit the race and assured everyone that evangelicals would come around. His enthusiasm peaked when Romney picked Paul Ryan. Land declared that the choice had “reshaped the entire presidential election.” Ryan, after all, was “a devout Roman Catholic,” as “rock-solid” on abortion and marriage. Like many Christian Right powerbrokers, Land does not formally endorse candidates. His message was nonetheless clear.” With the selection of Paul Ryan, Gov. Romney has driven a stake through the heart of the "Mitt the Cautious" myth and has replaced it with a "Mitt the Bold" narrative.”

Say, what?  “God is already judging America and will judge her more harshly as we continue to move down this path towards sexual paganization.” Who: Physician, former president of National Right to Life Committee, source of Todd Akin’s fanciful physiology that rape victims have a way of “shutting that whole thing down.”

Greatest Hits: Willke’s 1985 book advancing the inaccurate and ridiculous theory that the trauma of “forcible rape” prevents a woman from becoming pregnant has been translated into 21 languages and sold millions of copies. Willke’s myth is widely believed among sexual fundamentalists on the right.

Role in Romneyland: Willke endorsed Romney in his 2008 presidential bid and served as a campaign surrogate. At the time, Romney counted himself “proud to have the support of a man who has meant so much to the pro-life movement.” Since Akin’s revelation, the Romney campaign has run from the good doctor. Still, Romney met with Willke privately while campaigning in Ohio last October.

Say, what?  “He [Romney] told me ‘thank you for your support – we agree on almost everything, and if I am elected President I will make some major pro-life pronouncements.’” – Willke, in telephone interview with the Daily Telegraph

Nancy L. Cohen is a historian and the author of "Delirium: The Politics of Sex in America".