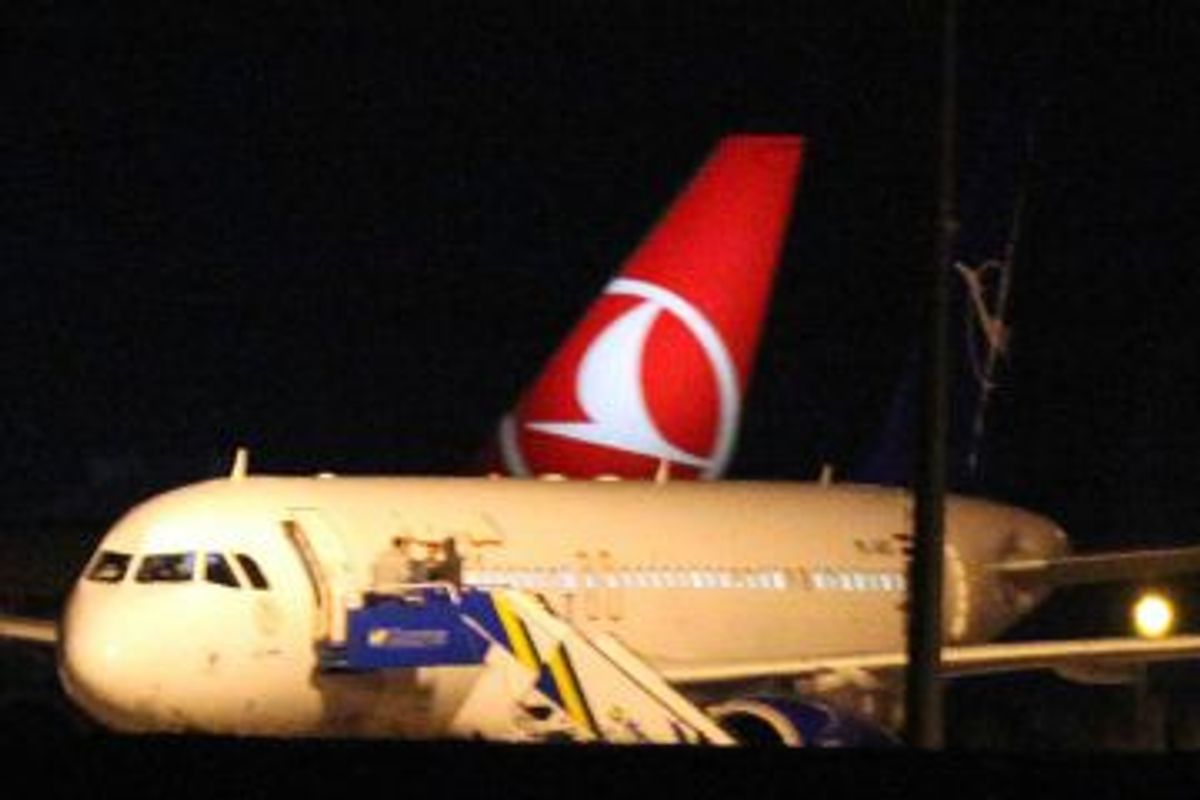 A Syrian passenger plane is seen after it was forced to land at Ankara airport. (Getty Images/Adem Altan)
--

Erdogan told the press that a search of the Syrian Air plane had revealed "equipment and ammunition that were being sent from a Russian agency [...] to the Syrian Defense Ministry," the Associated Press reported.

He said that the material had been confiscated and was being examined. Necessary action would follow, he said.

Suzanna Koster, reporting for GlobalPost from Istanbul, said that a local newspaper voiced support for the authorities' interception of the Syrian passenger plane.

"Turkey has shown how committed it is to making sure that civilians do not die at the hands of the oppressive Syrian regime," Aydin Albayrak wrote.

Koster added that Turkish Airlines has not used Syrian air space for the past four days, according to a reported statement by their chairman.

Both Syria and Russia have denied that any military equipment was on the Moscow to Damascus flight.

Russia's national arms export company, Rosoboronexport, told Reuters earlier on Thursday that it had no cargo aboard and that shipping weapons on civilian flights was illegal.

Syria's Foreign Ministry stated that the cargo consisted of legal, civilian items that were all listed on the plane's manifest.

It has accused Turkey of "piracy" and aggression, Reuters said.

Meanwhile, Russia has accused Turkey of endagering the lives and safety of the 37 passengers on board, 17 of whom were Russian, RIA Novosti reported.

Doctors and staff from the Russian embassy sought access to the plane as it was made to wait in Turkey, a Russian Foreign Ministry spokesman said, but were denied.

"Russia insists on an explanation of such behavior with regard to the Russian nationals and demands that measures be taken to prevent any such incidents happening in the future," he stated.

None of the passengers were arrested.

Turkey allowed the plane to resume its course and it arrived in Damascus early Thursday morning,according to Syrian news agency SANA.

The passengers were physically fine but in a "very bad psychological state," the head of Syrian Air, Ghaida Abdullatif, told the state-run news agency, adding that the airline planned to file a complaint with international aviation authorities.

Abdullatif claimed that Turkey's warplanes almost caused an accident by approaching the jetliner suddenly, though the Turkish Foreign Ministry has said that the pilot was given advance warning that his plane would be grounded if he continued his course into Turkish air space.

Several citizens GlobalPost's Koster spoke to in Istanbul Thursday were divided about what the incident means for Turkey — but they agreed that the show of force has political roots. Can Oymak, a 26-year-old banker, said he doesn't believe the Syrian passenger plane was carrying weapons, as claimed by the Turkish Prime Minister Erdogan.

"I think we're no more a step away from war, we're standing in front of the door of war. Turkey is making reasons up to start the war. Today's incident is just another reason. Turkey wants war with Syria because of America. Turkey is just a toy for the world's super powers, like Russia and America. These powers just want Turkey to act on their behest. And the Turkish government doesn't think about the consequences. It's not a good idea to have a war."

Osman Kamil, 35, an internet cafe owner, agreed that Turkey is making a play for power. "I think our government will attack Syria because our government and Erdogan are aggressive. They do this for themselves and then for America. Erdogan likes to see himself as a sultan. He has big dreams about a new Ottoman empire. If there is war I'll have to fight and I'll have to close my internet cafe. Some friends also have dreams about a new Ottaman empire and they support a war with Syria. But I don't want war."

Yusuf Yoruk, a student, thought that the Turkish government talks much tougher than it is. "A lot of people think there's going to be war with Syria, but I don't think so. It's just a political game. Syrian and Turkish people have no problems with each other."