Why is John Boehner helping out shady Rep. Michael Grimm?

After pledging "zero tolerance" on ethics, the speaker helps out a guy under FBI investigation 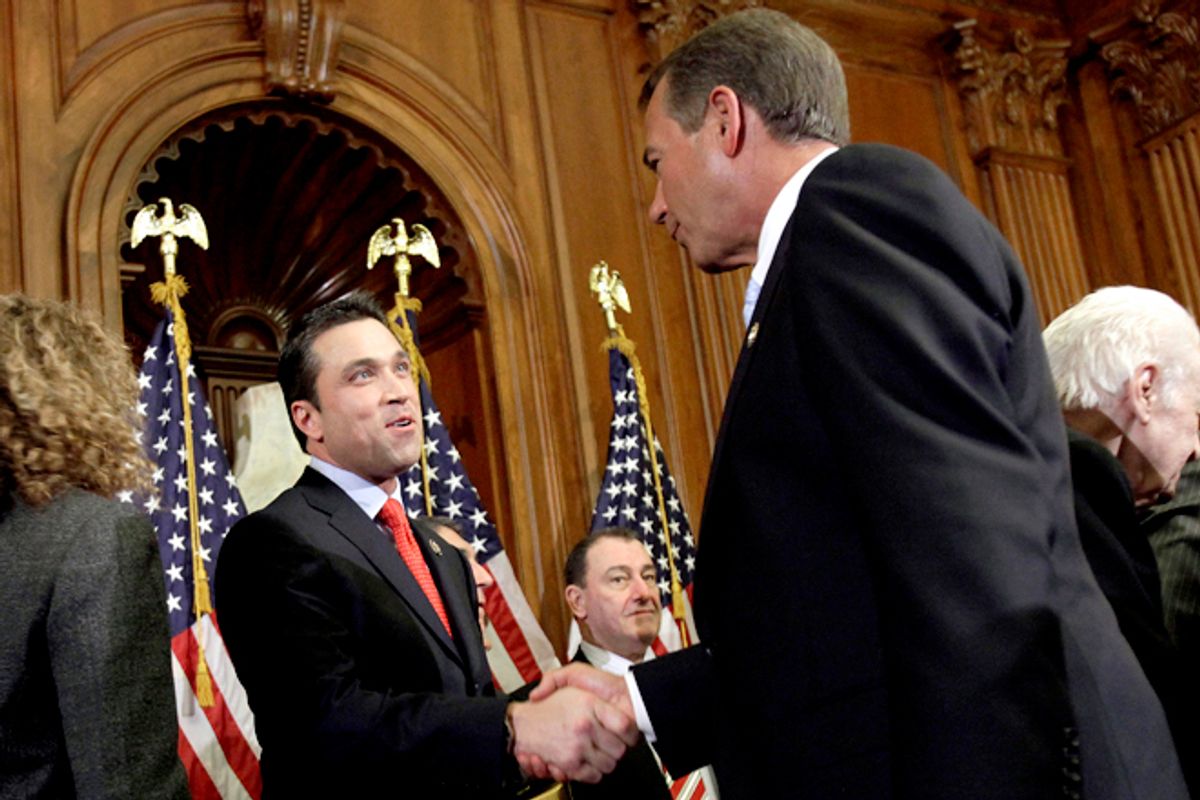 On Monday, the New York Times and Post reported that the ex-business partner of New York Republican Rep. Michael Grimm has close ties to the imprisoned don of the Gambino crime family, according to federal prosecutors. The old partner, whom Grimm started a restaurant with in 2006 after ending his colorful career as an undercover FBI agent, reportedly visits Anthony “Fat Tony’’ Morelli in prison and calls the crime boss his “uncle.” This came out at the bail hearing for Ofer Biton, a top fundraiser for Grimm who is charged with immigration fraud and being investigated by the FBI, as is Grimm himself, for allegedly breaking campaign finance laws. This has landed Grimm, who reportedly faces two other federal investigations, on the Citizens for Responsibility and Ethics in Washington's (CREW) “most corrupt” list for his second year in a row.

And yet this morning, House Speaker John Boehner was scheduled to appear at a fundraiser for the embattled first-term lawmaker in Manhattan. The minimum contribution was $2,500, while a $7,500 check would get you a photo with Boehner and Grimm. Checks were to be made out to the Manhattan Victory Fund, a joint fundraising committee incorporated very recently. A spokesperson for Boehner did not respond to a request for confirmation that the speaker attended the event, and an event organizer said she could not comment on it.

Boehner endorsed Grimm in March amid fresh reports that the FBI was probing the New York lawmaker. "The Speaker has time and again made clear that he holds every Member to the highest standards of ethical conduct, and Rep. Grimm continues to have the Speaker's confidence," Boehner spokesman Kevin Smith told Roll Call at the time. The speaker held another fundraiser for Grimm in June of last year. "This historic visit illustrates the impact that Michael Grimm has made in less than six months in office,” the president of the local Republican club said at the time.

“It doesn’t seem that Mr. Boehner is quite as concerned with ethics as he’s led us to believe," CREW’s Melanie Sloan told Salon. “Holding a fundraiser for someone who’s in as deep trouble as Michael Grimm is doesn’t suggest a zero tolerance for ethics. It suggests a very high tolerance for unethical conduct.”

And Sloan pointed out that Grimm is not an isolated case. In March, Boehner held a fundraiser for Florida Rep. Vern Buchanan, who is under FBI and IRS investigation for allegedly coercing his employees to donate to his campaign and then refunding them.  A New York Times editorial admonished Boehner for being “utterly unperturbed” by the ethics problems. Late last month, two people tied to Buchanan's fundraising scheme pleaded guilty to campaign finance violations.

Naturally, when Democrats controlled the House, Boehner made hay of any alleged ethics violation to slam the their leadership. When New York Rep. Charlie Rangel was hit with a violation, Boehner said it was a "sad reminder" of then-Speaker Nancy Pelosi's "most glaring broken promise: to 'drain the swamp' in Washington."

Apparently, now that Boehner holds the gavel, he thinks the swamp is fine left undrained.