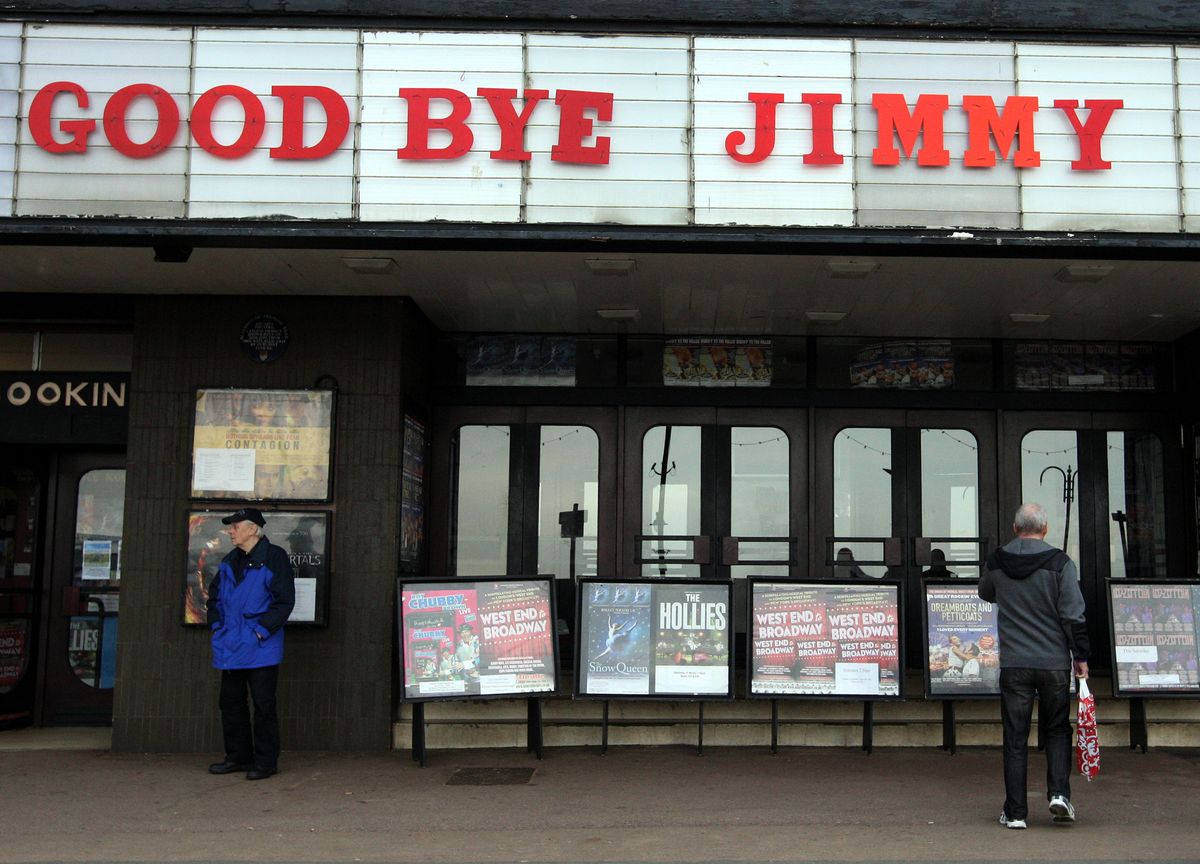 Members of the public are seen waiting for the coffin bearing the body of Sir Jimmy Savile. (AP/Scott Heppell)
--

Here is the BBC news: The UK’s leading broadcaster is in a state of turmoil after one of its legendary celebrities was exposed as a predatory sex offender, a revelation critics say undermines the public trust it needs to safeguard its future.

The alleged crimes of Jimmy Savile, a radio DJ and television personality who died last year, would be enough to prompt widespread outrage and revulsion under any circumstances. Police have described him as a “sexual predator” who may have raped or molested dozens of underage girls.

But Savile’s behavior is seen as especially scandalous because he was a prominent children’s entertainer whose status afforded him unsupervised access to a near-endless supply of potential victims. To make matters worse, it’s alleged senior figures at the BBC who were aware of his predilections chose to turn a blind eye.

The dark accounts of Savile’s assaults over four decades from the late 1950s have prompted claims of a wider culture of sexual harassment at the BBC after several female personalities recounted how their complaints about being molested were treated as a joke.

While the allegations focus on past events for which subsequent BBC managers are clearly not culpable, the 85-year-old institution has been taken to task for attempting to sweep the crisis under the carpet.

The response could come back to haunt the broadcaster: Government-appointed oversight officials are already indicating that heads may roll following police and internal investigations.

“The BBC’s squeaky-clean image is already dented, and the questions now are about how severe the dents will get,” said media strategy analyst Claire Enders. “The issues of complicity and of cover-up are ones that will be floating around the BBC for months if not years.”

The public impact of Savile’s crimes may be substantial. A onetime coal miner who claimed to have invented disco, he held the status of a rock star in his heyday. He drove a Rolls-Royce, adorned himself with gold jewelry and smoked cigars the size of chair legs.

He was a relentless charity campaigner who raised millions of dollars including for Stoke Mandeville, a hospital that gave birth to the Paralympic movement, which earned him a knighthood from Queen Elizabeth II.

But he was also an oddball whose eccentricities, even before the sex allegations, were often as unappealing as they were fascinating. He sported an outrageous mane of blond hair, wore garish tracksuits opened to show string vests and claimed to have an obsessive devotion to his dead mother.

The BBC honored Savile with flattering tributes when he died last year. Its executives also made a controversial decision to kill an item on the current affairs show “Newsnight” involving interviews with women who claimed he had abused them.

Those claims resurfaced this month in a documentary on ITV, a commercial network and longtime BBC rival. At the same time, newspapers reported details about how “Newsnight” staff were ordered to spike their earlier investigation.

Since the ITV documentary aired, dozens more women have stepped forward to recount gruesome tales of abuse by Savile at the BBC or at schools, hospitals and other institutions that opened their doors to him.

Meanwhile two BBC household names, Sandi Toksvig and Liz Kershaw, told how male colleagues fondled their breasts while they were live on radio during the 1980s. Their complaints at the time were met with derision.

Toksvig has said her treatment reflects wider problems in the media industry of the period and shouldn’t be used to attack the BBC. But experts say the broadcaster still has serious questions to answer, not least for its stumbling response to the Savile scandal.

As the accusations against him snowballed, the BBC initially tried to sidestep the issue, saying its own investigations had revealed no record of allegations or misconduct. It also said the “Newsnight” report was dropped for “editorial” reasons rather than as part of a cover-up.

Under mounting pressure, George Entwistle, the broadcaster’s newly appointed director general, eventually issued an on-air apology to Savile’s victims and pledged to launch an internal inquiry once police conclude their own investigations.

The BBC’s government-appointed chairman, Chris Patten, also criticized for failing to comment on the issue, finally spoke this week to deny knowledge of any cover up. He called the affair a “cesspit” and said executives could lose their jobs as a result of the inquiry.

For many of the BBC’s critics — chiefly commercial media outlets that view themselves as the broadcaster’s self-appointed watchdogs but also covet its publicly funded budget — Entwistle’s delayed statement, the deferred post-mortem, and the “Newsnight” excuses aren’t enough.

“A terrible signal has been sent to future whistleblowers wanting to approach the BBC,” wrote Dan Sabbagh, the Guardian newspaper’s head of media and technology. He said the mixed response “leaves the BBC without a clear voice” at a time of crisis.

Enders, the media strategy analyst, said the Savile accusations raise questions about trust even though sufficient procedures and safeguards have been put in place to stop potential abusers at the BBC from targeting children.

“The kind of stories coming out about lack of supervision tend to support that at the very least the BBC was turning a blind eye, and that’s not how the public wants the BBC to behave,” she said. “This is going to be a very public scandal.”

Although more negative headlines will probably have repercussions for prominent figures found at fault, she said they’re unlikely to have an impact on future negotiations over the unpopular “license fee” household tax that provides the broadcaster’s main funding.

Angela Philips, a lecturer in media and communications at London’s Goldsmith’s University, agrees. She says public affection for the broadcaster is robust enough to weather the Savile scandal and BBC opponents’ attempts to turn it into an issue of governance.

She said Entwistle will probably face tougher challenges as he attempts to fulfill pledges to improve quality while streamlining the service in line with budget cuts prompted by the financial downturn.

“The biggest issue is whether it will manage to hold its own and absolutely stand by the need for public broadcasting at a time when news organizations in particular are under enormous pressure,” she said.

As new allegations continue to surface, the most significant damage so far has been to Savile’s once-respectable legacy. Buildings and streets named in his honor are to be rechristened. Even his $6,400 tombstone has been removed, along with its eerily prescient epitaph: “It was good while it lasted.”

And the BBC, under heightened scrutiny over its coverage of the scandal, must resign itself to the prospect that it will be the subject of its own news bulletins for many months to come.