That should stop the bleeding

The snap polls offer a mixed verdict, but Biden achieved his most important objective in Danville 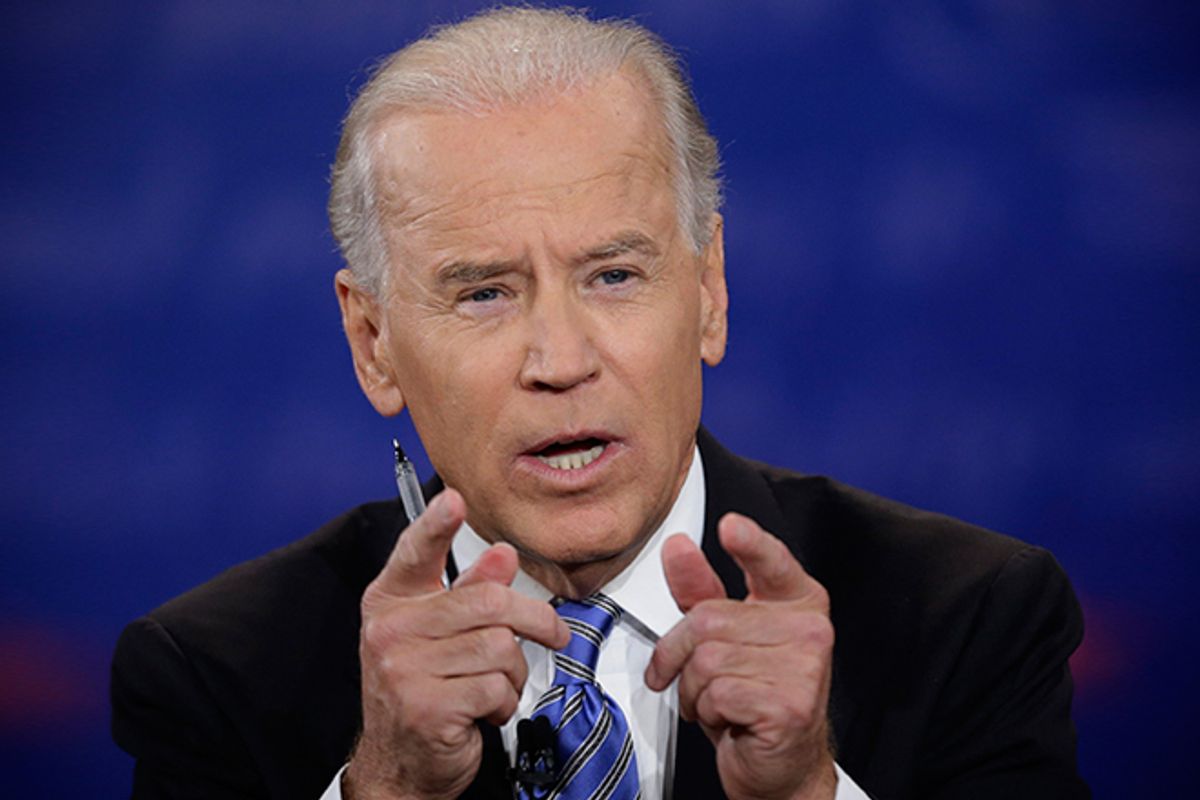 The overnight polling isn’t as conclusive as it was a week ago, when both instant surveys showed Mitt Romney the clear winner over Barack Obama.

This time, one snap poll gave Joe Biden a decisive edge, with 50 percent of undecided voters telling CBS that he was the victor, compared to 31 percent for Paul Ryan. But a CNN poll of all debate viewers put Ryan ahead by 4 points, 48 to 44 percent. (CNN added a caveat, though: The debate audience was apparently more Republican-leaning than the overall electorate, resulting in a sample that was about 8 points more Republican than the typical poll.)

These immediate assessments aren’t necessarily fixed. Depending on what themes are emphasized, the aftermath of a debate can lock in different and more definitive opinions among voters. The famous example came back in 2000, when it initially seemed that Al Gore had fared fine in his debate with George W. Bush, only for the political world to focus in the ensuing days on Gore’s exasperated reactions to Bush’s answers.

In that sense, there may be a slight danger for Biden here in that he was so expressive in the split-screen shots as Ryan spoke last night, so forceful in his own delivery, and so eager to interrupt his opponent. As soon as the debate ended, Republican-friendly outlets began pushing the notion that the vice president had displayed rude and unhinged behavior. Biden also presumably gave plenty of material to “Saturday Night Live” and other comedy shows. The risk for Democrats is that his antics become the main takeaway from Danville.

That’s the worst case for Democrats, but it’s not likely to play out that way. For one thing, Biden’s reputation as a volatile and unpredictable character preceded him. Fair or not, he’s gained a reputation over the last few years as everyone’s slightly crazy uncle, but that probably works to his advantage here. If that’s Biden’s image, who would really be surprised by a debate performance like that? Plus, this was a vice-presidential debate, not a presidential one, and Americans are probably willing to grant the candidates a little more leeway here.

Much more likely is that Biden’s performance will boost his ticket, for one simple reason: He showed some fight. He showed a lot of fight. He was, as Joan Walsh wrote last night, everything that Obama wasn’t in Denver last week. His thoughts were sometimes jumbled together, but when Biden wanted to make a point, he made it firmly, with a tone that conveyed authority. When Ryan made an assertion that was factually flawed, Biden let viewers know immediately.  He let very little that his opponent said go unchallenged. He showed genuine human emotion.

The main effect of this will be to fire up the Democratic base, which was profoundly demoralized by Obama’s performance last week. A key to the Obama surge in September – a surge that was shared by Democratic candidates down the ballot – was the narrowing of the enthusiasm gap between the parties, the result of a brilliantly choreographed Democratic convention in Charlotte (and a dud of a GOP convention in Tampa). But Romney’s glib, confident performance in Denver woke Republicans back up and silenced what had been an expanding chorus of intra-party critics. For the last week, it had been Democrats openly questioning their presidential candidate and Republicans making gains on the enthusiasm front.

Ryan was feisty enough last night that Republicans won’t be too dismayed. It probably wasn’t a bad night for Republicans, not like last Wednesday was a bad night for Democrats. But it was definitely a good night for Democrats, who finally got to see one of their national candidates stand up to the Romney-Ryan talking points, challenge most of them, and dismantle a few of them. At the very least, Biden’s performance should keep the media from declaring that the Democrats are now 0-and-2 in the debates and advancing the “Romney surge” narrative.  He stopped the bleeding. And now the pressure is back on Obama, who will get a second chance at Hofstra next week.