When the subject came up, we heard about religion and science. But what about women's rights? 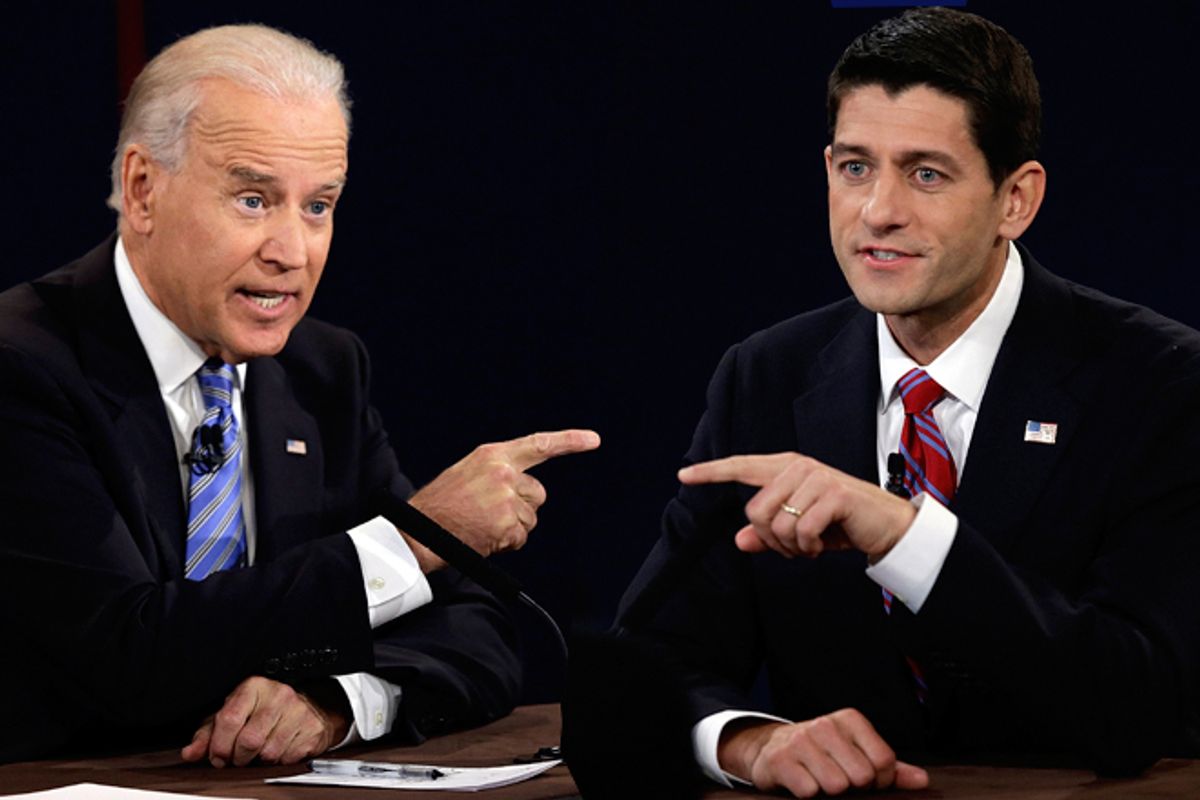 "We have two Catholic candidates, first time, on a stage such as this. And I would like to ask you both to tell me what role your religion has played in your own personal views on abortion. And, please, this is such an emotional issue for so many people in this country … please talk personally about this, if you could."

In a mostly exemplary performance, this was a lapse. Martha Raddatz could have asked about the voting gender gap, or maybe whether we have a "war on women" or a "war on religious liberty." She could have asked about access to contraception to reduce unwanted pregnancies, or the rights of rape victims, or the stalled Violence Against Women Act, or equal pay for women.

Instead, she chose to frame the late-breaking, much-yearned for question about "social issues" in just the way Republicans prefer: in terms of religion. (Watch the clip below.) Everyone at Salon's debate-watching party groaned, and with good reason. Please, let's hear more from two religiously observant white men about their personal experiences with women's reproductive freedom and access! It's not that religion, or men, have no place in the debate over abortion rights; it's that her question left women out of the equation from the start.

Interestingly, Paul Ryan didn't really want to dwell there, choosing to quickly pivot to "science" with an extended soliloquy about how he saw his child's ultrasound, though he did throw in a dig at Obamacare's alleged "assault" on the "religious liberty of this country." He claimed, falsely, that the Obama administration changed the status quo on abortion:  "The Democratic Party used to say they wanted it to be safe, legal and rare -- now they support it without restriction, and with taxpayer funding. Taxpayer funding in Obamacare, taxpayer funding with foreign aid." In fact, there has been no such change: Taxpayer funding doesn't go to abortion, here or overseas, except in cases of rape, incest and life endangerment. ("Safe, legal and rare" was, in fact, removed from the Democratic platform, and for good reason.)

Biden did engage the religion question: He said he accepted the church's prohibition in his public life, but "I refuse to impose it on equally devout Christians and Muslims and Jews, and I just refuse to impose that on others, unlike my friend here, the -- the congressman. I -- I do not believe that we have a right to tell other people that -- women they can't control their body. It's a decision between them and their doctor." It might sound somewhat incoherent, but I'd be willing to bet that it conforms to the average American's muddy view on abortion rights and religious freedom more than any absolutist stance.

And then Biden called out an unmistakable contradiction -- the one between Ryan's longtime absolute position on abortion and the one Mitt Romney currently favors, of limited exceptions. "I guess he accepts Governor Romney's position now, because in the past he has argued that there was -- there's rape and forcible rape. He's argued that in the case of rape or incest, it was still -- it would be a crime to engage in having an abortion. I just fundamentally disagree with my friend." He also hammered Ryan on the Supreme Court and the involvement of Robert Bork in the Romney campaign, which isn't discussed enough.

Then we finally got to hear how Ryan the antiabortion absolutist reconciles being part of a ticket that, even before Romney disavowed antiabortion legislation, took a completely different view from him on abortion.

"All I'm saying is, if you believe that life begins at conception, that, therefore, doesn't change the definition of life," he said. "That's a principle. The policy of a Romney administration is to oppose abortion with exceptions for rape, incest and life of the mother."

It was the most telling line of the night -- Ryan preserving his own antiabortion bona fides no matter what kind of "moderation" Romney tacks to in the coming weeks to avoid scaring female voters. It was also him saying that he has his own principles, and then he has the policies that Romney thinks will win, and those are very different things -- ones he's willing to compromise to win, at least rhetorically. What happens when they get in the door, if they do, is another matter.