Wigs are my superhero costume

As my life spun out of control, they were a force field against my own fear. But maybe it's time to stop hiding 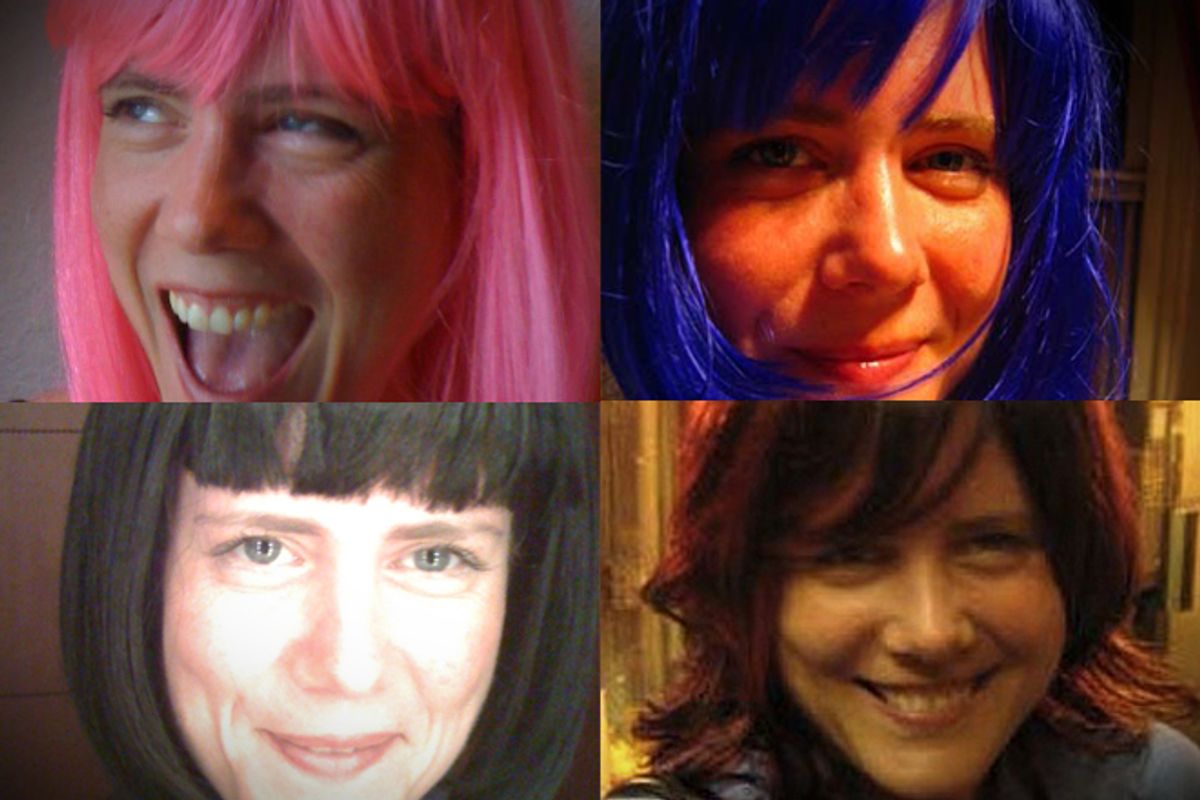 Photos of the author in four different wigs.
--

I was sitting at my kitchen table with a guy I’d met earlier that night. It was some dark hour beyond midnight, maybe 2 a.m., maybe 4 a.m., and I was wearing a pink cotton robe from Japan that made me feel like a geisha. I was also wearing a wig.

“I wish you’d take that thing off,” the guy said, as we both sipped our beer.

“Why?” I said, propping my bare legs on his lap. I liked that wig. It was magenta, a fiery and improbable color, and its long, flippy layers draped across my shoulders with architectural perfection.

The wig also looked surprisingly natural on me, like I was born to wear a fiery and improbable drag. I wore it to a bar on the Lower East Side, and it was such a trip to realize that every stranger believed this weird lie about me. Nobody thought I was wearing a wig, because why on earth would I be? The next day I posted a picture of myself on Facebook in that wig, and even my friends bought it. The comments exploded. Yowzah love your new hair. And the compliments were so frothy, and felt so good, that I couldn’t bring myself to puncture the magic.

I actually had several wigs at that time. A Farrah Fawcett wig. The electric blue wig of an anime character. The wigs fit various moods and personas, and I developed an odd habit of wearing them as I cleaned, like a woman who puts on pearls to vacuum.

But the wig made the guy at my kitchen table uncomfortable. “I want to be with the real you,” he said, rubbing his hands along my thighs.

I lit a cigarette. “What if this is the real me?” I asked.

We never saw each other again.

As long as I can remember, I have liked costumes. Baby pictures show me wearing big hats with my hands up to my head like a model. I struck poses like other children sucked their thumbs, as if I had been born with this muscle memory. My mother, an earthy '70s beauty, was mystified. Where did this kid come from? In elementary school, I loved sparkly makeup and dress-up and any excuse to try on someone else’s clothes. In high school, I was big into drama. This surprised no one.

But there was this other part of me, too, the part that wanted to disappear from the world. I hit puberty at nine years old, and self-consciousness struck like a wrecking ball, and I spent years burying my body in baggy clothes and hoping to God no teacher ever called on me in class. As much as some core part of my personality was begging you to watch me, love me, look at me dance papa, some part of me wanted to turn off all the lights and pull the covers over my head. In my 20s, as I wrestled with my weight and my confidence and my funny little superpowers, I was torn between wanting everyone to pay attention to me and wanting everyone to look away. Alcohol can be very useful in this push-pull. So can wigs.

The wig thing started in my early 30s. I had been living in New York, which is a city that is so not impressed by anyone’s quirky “I-vacuum-in-a-wig” routine, and I liked that. Nobody blinked when I threw a birthday party in Prospect Park and wore a long hot pink wig with Bettie Page bangs. There were so many better, more original ways to be an eccentric: Wear scary clown makeup, dress in a tutu, smoke crack with your cabbie. I was way too conservative for any of that. I wore H&M dresses in a size too small and drank 12-packs of import beer. But I loved that wig, how the hair fell to my bra line like a long curtain. I wasn’t trying to be a weirdo; I just wanted to be a girl with that hair. I wanted whatever I didn’t have. I wanted whatever you had. I wanted hair the color of bubble gum. Honestly, is that so wrong?

Amy Winehouse hit the scene that year, in all her cat’s-eye-and-beehive splendor, and I read an interview in which she said the more insecure she felt, the higher her hair became. Gloria Steinem said something similar about her trademark aviators: She could hide behind them. And I totally understood that, how the most outrageous part of you could be a shield to protect the most sensitive spots inside. Dolly Parton is one of my heroes, and she wrote the most tender love songs draped in a gladiator costume of tackiness. For the past few years, it seems like every female performer is touting her wigs: Katy Perry, Beyonce, Adele, Nicki Minaj, the Gaga. But divas have been wearing wigs as long as they’ve been staring down the floodlights, because the world is a terrifying place and the wig is a force field. The wig is your secret identity as a foxy super-agent spy. The wig is a superhero costume.

And I needed the protection. By the time I wore the hot pink wig to my birthday party in Prospect Park, I was starting to panic about work. My colleagues were brainiacs, with their famous writer friends and their casual knowledge of Marx and Herzog, and I felt it was only a matter of time before they would discover what a fraud I was, soft-shoeing my way through every meeting with big verbs and charm. I was so good at pretending I knew stuff that I often forgot that I actually, as a matter of fact, knew stuff. But I believed I was fooling them, and I lived in fear of the moment when my true self would be discovered -- when someone would rip a wig off my head and reveal the hideous, matted bald cap underneath.

It’s curious to me now that the years I wore wigs track exactly with my worst years of drinking. I don’t know the psychological term for what was going on, but I know the wigs felt good and right. They fit me in a way that calmed some inner turmoil.

When I told that guy in my kitchen that the wig was really me, I wasn’t simply being clever and aloof. I wasn’t even necessarily wrong. Because so much about me at that time was a posture: I was trying to be sexy and cool and indomitable when I was actually scared and easily wounded and aching to be loved. I was dressed for a show because I was putting on a show. That guy and I barely knew each other, and yet there we were in my kitchen holding hands and letting our hands wander along body parts the sun doesn’t see and lying in my bed like two people who had real intimacy, but we had no intimacy. I’d learned his name three hours ago. We were pretending to be a couple when we were a couple of strangers. The true and vulnerable spots in us were untouchable to the other one, and so we never saw each other again, and I was sort of relieved, and sort of disappointed, which is the exact feeling I had after every one of those drunken, bash-your-body-into-mine encounters, no matter the outcome.

When I quit drinking about two and a half years ago, I relinquished that kind of reckless escapade. I stopped trying to be a tough-talking city girl who slept with guys she just met, and I spent a lot of time alone, walking around the city for hours at a stretch, climbing in bed at the wise hour of 10 p.m. with nothing but my cat and a book that would make me cry.

I had such turtle skin in those days, because I was stripping off all the armor that kept people from getting too close: the alcohol, the brassiness, the extra weight. This is a part I’m still struggling with -- which parts of myself I need to protect, which parts I can thrust into broad daylight. (Or: Which parts of myself I need to accept, and which parts I need to change.) But I found that the less I stopped trying to cover up my sadness the more it drained away. Still, I worried that my non-drinking life would be bloodless and boring. I worried that sobriety left no room for foxy superagent spies, and I hoped that wasn’t true. So I held on to those wigs, and when I moved from New York back to my hometown of Dallas, I displayed them in my bedroom, a reminder of who I was and might be again.

Not long ago, I wore a Cleopatra wig to dinner at a ritzy Dallas restaurant. The wig was chic and glossy, and it made me look like a punishing New York fashion editor who said very dismissive things to her assistant. And that is not me at all, but I liked wearing the wig, because it was a reminder that I can still have my little kinks, even after I stopped pumping myself full of vodka and dry-aged hops.

I'm pretty comfortable with my own hair now. I’ve gotten exceptionally good at blowing it out, and each strand is tamed to architectural perfection. (Actually, it kind of looks like a wig.) But one day near the end of August, I was at a water park with my friend Mary, and my hair had dried in the sun so that it was a hurly-burly of spirals. As we sat at a picnic bench eating lunch, the two of us letting it all hang out, Mary kept staring at me.

“I’ve never seen your hair like that before,” she said.

“You should wear it like that more often,” she said. A funny, too-sensitive part of me was like: What, are you saying you don’t like my hair? And then I realized she was telling me the opposite.