DNA testing has overturned many wrongful convictions -- but what if there's no DNA to test? 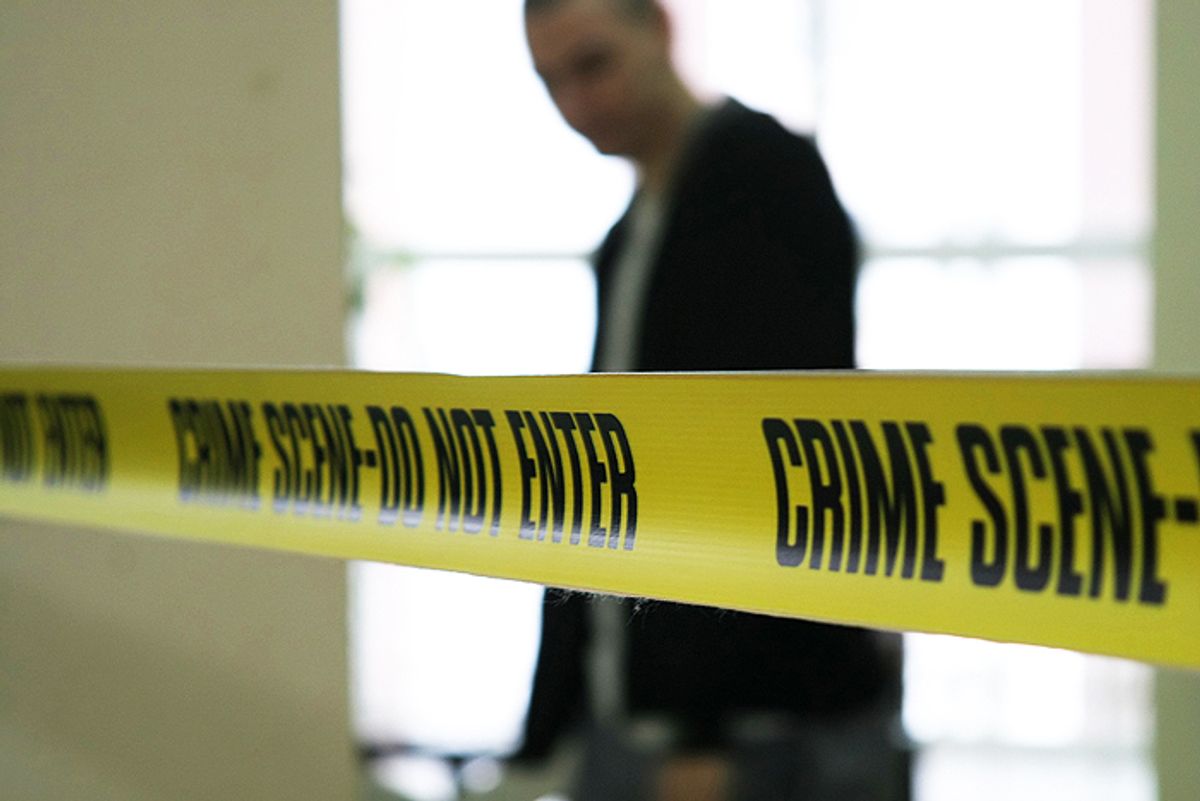 The most hopeful scenario possible for innocent inmates fighting a wrongful conviction is when DNA testing of existing evidence might be enough to exonerate them. DNA holds out an unparalleled promise of certainty. As far as evidence goes, it’s the gold standard; solid science. Just last month, a Louisiana man became the 300th inmate in the U.S. exonerated by it.

Yet DNA evidence plays no role in 90 to 95 percent of criminal convictions and the inmates in such cases’ subsequent innocence claims. Often biological evidence simply doesn’t exist. Sometimes it has been badly degraded or has simply vanished. Without DNA’s “aha” moment, judges are even more loath than usual to consider setting aside a conviction. So, what of the wrongfully convicted for whom DNA can never offer a glimmer of hope?

Criminal defense attorney Glenn Garber, who founded the non-profit Exoneration Initiative known as EXI in 2003, calls this the forgotten population “because protestations of innocence from prisoners whose cases lack DNA fall on deaf ears.”

It is far tougher to right an injustice without science’s darling DNA on board. So, when Garber found himself deluged with letters from inmates with non-DNA cases begging for his help after he helped Barry Scheck with an Innocence Project case that led to a prisoner’s exoneration, he decided to dedicate himself to looking into non-DNA cases. It’s an uphill struggle.

The New York-based Innocence Project is DNA-centric by design and lists only five exonerations based on non-DNA evidence since its inception in 1992. Historically, it has terminated many investigations precisely because of a lack of biological evidence. Innocence projects in some states like Delaware, Florida, and Nebraska will only take on DNA cases.

One hurdle Garber faces is “getting courts and prosecutors to consider the substance of our innocence claims instead of casting them aside on procedural grounds.”

“There’s almost no question,” says David Faigman, a professor at University of California’s Hastings College of Law in San Francisco, “that there are defective prosecutions and convictions out there that are nearly undiscoverable because you don’t have what we call ground truth. You don’t have something that once you discover it, it’s a scientific fact that indicates there was a fundamental problem. And how do you meet that?

“Simply raising reasonable doubts after the conviction is not sufficient to overturn a conviction. And if you don’t have some positive proof like DNA, and even if you have a confession from somebody else, that’s not going to be, typically, enough.”

There are innocence projects across the country accepting non-DNA as well as DNA cases. It’s just that the resources available to work on them may not be equitable.

Getting any case back into court is tough going, whether appellate issues include ineffective counsel, unanalyzed evidence, or advances in scientific knowledge as in arson and shaken baby syndrome investigations, two non-DNA frontiers now producing cases under review.

“Remember, DNA is something that prosecutors most often use as a sword,” says John Hanlon, legal director of the Illinois Innocence Project at the University of Illinois, Springfield. “So for them to say, ‘Well, this is not reliable’ is obviously not going to fly. It would not be consistent. So because they use it as a sword, they’re much more accepting if it comes from the other direction.”

When a non-DNA conviction is challenged, it’s more likely to be met by prosecutors doubling their efforts to protect it.

And while DNA cases may perhaps account for only 5 to 10 percent of innocence claims, they have received the lion’s share of the funding and attention.

“It is a much more difficult and much more time-consuming, a lengthier process, to do innocence work post-conviction without DNA,” says Hanlon. Working even a few cases consumes many thousands of mostly volunteer work hours and can take years.

“Very often, the issue comes down to needing experts and experts tend not to work pro bono or come cheap,” says Hanlon. “DNA work has gotten much less expensive over the years, but experts, not so much.”

Most prisoners don’t have the private means to re-open their cases. “It’s sad,” says Arizona Justice Project lawyer Lindsay Herf, “that inmates have to rely on non-profit innocence projects to help them prove their innocence.”

The Illinois Innocence Project, which has fielded approximately 1,000 requests for help, has both DNA and non-DNA grants. It has a federal grant of $687,448 to work on DNA cases. In fall 2011, it received a $249,319 U.S. Department of Justice grant to work cases that can’t be resolved with DNA testing.

In August, EXI’s Wrongful Conviction Review Program received a two-year grant of almost $200,000 for non-DNA work. “We can advance a backlog of cases with a new staff attorney and fund investigations,” says Garber, “which is a critical aspect of our work.” EXI, which is New York’s only organization focused on non-DNA cases, also has private grants, such as $122,500 from the Guggenheim Family Foundation and $50,000 from the Vital Projects Fund. Like Hanlon, Garber is thankful for the grants they have, but says “we are in real need of more funding.”

EXI has reviewed more than 2,000 cases. In June, it secured a retrial for Derrick Deacon, who had served 20 years after being convicted in 1989 of the Brooklyn robbery and shooting death of Anthony Wynn. Garber hopes the state will decline to retry him but if it does, he expects an acquittal. Deacon was originally convicted largely on the word of a building superintendent who claimed to have seen him. But in 2001, an FBI witness in an unrelated case told agents that members of a violent Jamaican gang that controlled the neighborhood killed Wynn.

EXI also helped exonerate William McCaffrey, who was convicted of rape and kidnapping and sentenced to 20 years. He served three years before his accuser admitted to lying. And EXI obtained a retrial for inmate Selwyn Days in a double homicide, but lost that case. “Mainly because the court precluded us from calling a false confession expert which is one of our key issues now on appeal,” says Garber.

Challenging confession evidence can be critical in non-DNA cases – along with challenging eyewitness and informant testimony, forensic evidence and the conduct of police and prosecutors and lawyers.

Lawyer Katie Puzauskus manages the Arizona Justice Project’s non-DNA Wrongful Prosecution Grant from the Bureau of Justice Assistance and receives approximately 300 inmate requests a year.  (The Arizona Justice Project only takes on cases where prisoners have exhausted their appeals and are no longer eligible for a public defender or legal representation.) The grant has gone to reviewing cases involving evidence like eyewitness identification, ballistics, tire-track analysis and jailhouse snitch or informant testimony. “Also, we’re looking at whether witnesses were offered immunity to testify, or a plea agreement,” says Puzauskus.

Currently, approximately 45 cases are under review. “In the Justice Project’s history we have had at least five non-DNA cases of factual innocence where the conviction was vacated or overturned.”

Problems with crime labs have also impacted convictions. August 2010 saw the publication of the devastating audit of the North Carolina State Bureau of Investigation commissioned by the state’s attorney general. It revealed a systematic practice of holding back important blood test results from lab reports. The lab’s director was replaced and analysts were suspended and removed from working on cases.

One such analyst worked on the case of Derrick Michael Allen. He was 19 when he was convicted in 1999 of murdering and sexually assaulting his girlfriend Diane Jones’s 2-year-old daughter Adesha. Adesha was in Jones’ cousin Zakia Ward’s care that day but Allen was present and bathed the toddler. He called 9-1-1 twice to say that Adesha had passed out and stopped breathing.

Old-fashioned blood evidence was at the heart of the case; reportedly found by a doctor in the child’s vaginal area – where Diane Jones said a scab had been bleeding – and on her pajamas and panties. Was it there or wasn’t it?

Prosecutors first sought the death penalty then offered Allen a deal ensuring that he would serve at least 60 years. Told that blood evidence would convict him, he accepted an Alford plea, which essentially allows someone to accept responsibility for the crime without admitting guilt.

SBI records later revealed that while a common preliminary test known for giving false positives had found blood on the child’s clothing, three successive tests – all more sensitive – found no blood. Yet those three results were not documented. And the prosecutor told Allen’s jury something demonstrably false: that blood was found on Adesha’s clothing.

It is the prosecution’s responsibility to turn over to the defense all possibly relevant or exculpatory documents. But only 12 years after his trial did Allen see a statement from Zakia Ward, who testified against him at his trial. In it she said they were once sexually involved but had become “like enemies.” Strong words that Allen’s defense could have used to show jurors her bias.

Judge Orlando Hudson dismissed the charges against Allen in December 2010 after ruling that the state’s report was prepared in an “inaccurate, incomplete and intentionally misleading manner.”

Judge Hudson wrote that former Assistant District Attorney Freda Black and current District Attorney Tracey Cline (who is appealing being removed from her job and faces an unrelated state bar disciplinary hearing) knew that some information they intentionally failed to disclose was exculpatory. He decided that their suppression of material information favorable to Allen violated his constitutional rights.

Prosecutors appealed, but with evidence in the case missing or destroyed, “It is no longer possible,” Hudson wrote, “for Mr. Allen ever to receive a fair trial.” He also observed that Allen, who was released on bond in September 2010, was coerced into accepting the Alford plea with the threat of the death penalty.