Oh, the smell of it: 10 best perfume commercials ever

As Brad Pitt, Chanel No. 5's first male spokesmodel, joins the odd tradition of aroma-hawking, we revisit our faves 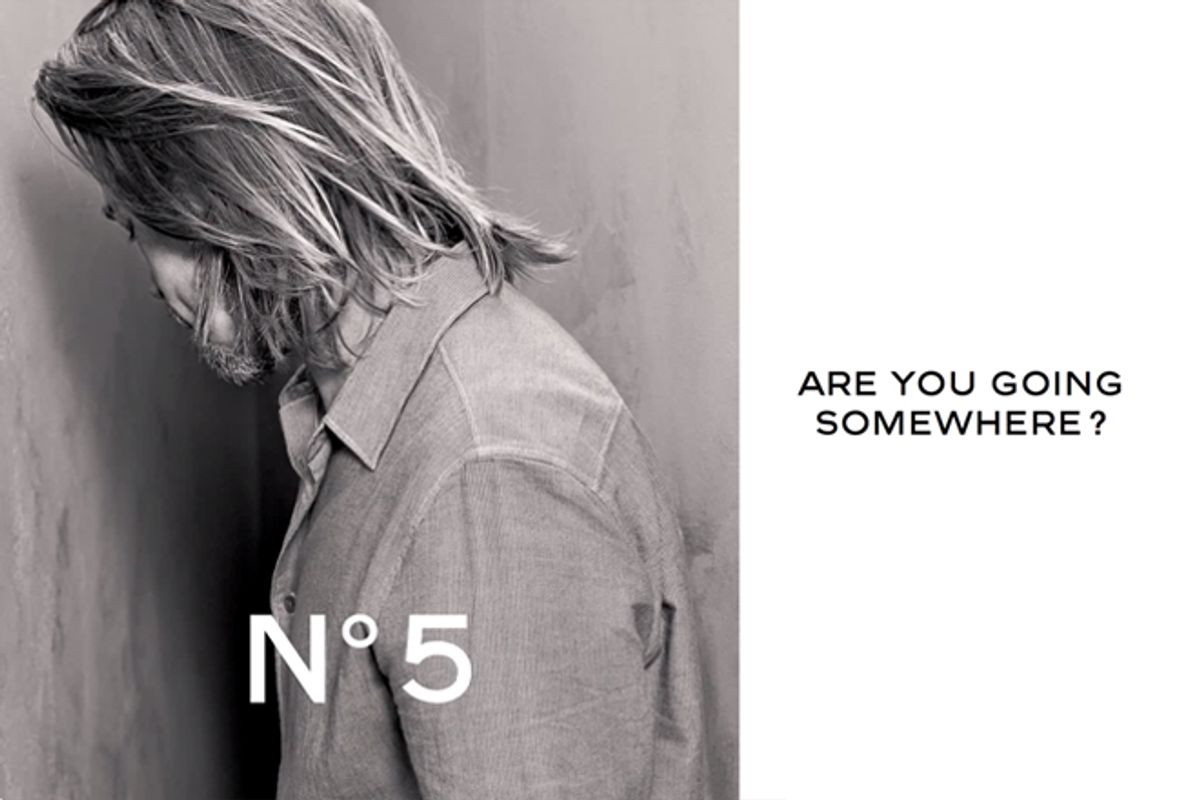 It’s not easy to sell a smell. That's why the best fragrance campaigns rely on selling a mood — and often involve people everyone knows or wants to sleep with.

Enter Brad Pitt: On Monday, Mr. Jolie will appear in the next big fragrance campaign for Chanel No. 5, the first male spokesmodel in its 91-year career (and with compensation as handsome as he is: around $7 million). The commercial reportedly depicts Brad charming a lady who, it is revealed, is a bottle of Chanel No. 5. Will Brad's ad linger in your mind as long as the memories and aromas of these top perfume ads of the past? Here’s a list of the biggest, best and most indelible fragrance commercials.

10. Canoe (1981) The hunky guy, the sailboat, the flags, the side ponytail. This Canoe ad is basically saying that if you wear this cologne, you are signaling to women that you are ready for sex from miles away. “Canoe Canoe?”

9. CK One (1995) Heroin chic was captured in a bottle for this campaign. Who knew that showing a bunch of skinny people who look like they have sweaty-bad druggy-B.O. could make a bottle of fragrance so compelling?

8. Coty Wild Musk (1983) The best thing about this commercial is that it owns its cheesiness. These two cavepeople look like freshmen at Cal State in 1988, and the set looks like it's from that "Showgirls" volcano number. What makes this ad most memorable, though, is when cavegirl touches caveboy’s chest and causes “a thousand quivers.”

7. Enjoli (1980) "I can bring home the bacon, fry it up in a pan.” With this campaign, Enjoli captured the liberated, working woman of the 1980s (check out that office attire!). The fragrance became less about sexuality and more about “having it all.” Get a bottle to Anne-Marie Slaughter — stat!

6.  L’Air du Temps (1982) Sometimes it just takes a good song to sell a perfume. Amid all the flowery Victoriana, you are told “something’s in the air.” What is it? To find out, all you need to do is wear a white diaphanous dress, dab L’Air du Temps on your neck, and you will be making out with a preppy guy in minutes.

5. Calvin Klein's Obsession (1985) “Ashes. Only ashes.” It’s the unashamed pretentiousness that makes this ad work. The art-house cinema quality, the stiff Ingmar Bergman–esque actors, the bad poetry, all on a blank stage. It’s like you are spraying the movie "Persona" behind your ears.

4. Charlie! (1976) There may be no face more definitive of late '70s/early '80s beauty than that of Shelley Hack, top model (and replacement angel on "Charlie’s Angels"). This ad (which co-stars the legendary Bobby Short) still looks classy. The Charlie woman looks fun, independent and gloriously free of breast augmentation.

3. White Diamonds by Liz Taylor (1991) Message to Brad: Study this campaign closely, though no one, not even your wife, can top the late, great Liz. Only the “Greatest Movie Star of All” could convince us that White Diamonds is a classic scent and that she hangs around salty seamen as a gambler’s moll.

2. Egoiste! (1992) The artist, designer and advertising film director Jean Paul Goode creates the funniest, cheekiest cologne campaign in history. This ad is the definitive example of modern advertising self-awareness. Goode (who also created the unforgettable album covers and videos for Grace Jones) lets us all in on the joke, while still making this product seem worth buying.

1. Chanel No. 5 (1982) Obvious yet oblique; arty yet accessible, Chanel No. 5's campaign is pure marketing perfection. It all makes sense when you find out that these mini-films were directed by Sir Ridley Scott. In one, the Inkspots’ song "I Don't Want to Set the World on Fire" plays in the background as a French garden morphs into a piano, then into train tracks and into a city skyline. Huh? A handsome man’s face — his name is Charles — enters the frame. A woman — Catherine — is walking toward him. He has a question for her, she an answer for him. We don’t get to hear it, just more Inkspots lyrics — "In my heart I have but one desire?" Yet we don’t need one, because the shadow of the plane gliding up the Transamerica Pyramid building, and in this next commercial, where it flies across a pool, speaks volumes: A sunbathing goddess lying poolside declares, “I am made of blue sky, and golden light, and I will feel this way forever.” Does it make sense? No! But does it send the message that if you wear this perfume a totally wet man will appear between your legs? Yes!

BONUS: Jean Naté (1984) It's a body splash (whatever that is) but this commercial makes you want to douse yourself with Jean Naté and then go horseracing. It’s the definitive '80s ad of woman as power broker.

Maybe the worst? Tramp (1977) The worst tag line in advertising ever: “She’s wearing Tramp and everybody loves her.” Also, this lady looks annoying. Who haggles over an apple?