After two debates, progressives are left with more questions than answers about the fate of one of our most important social programs 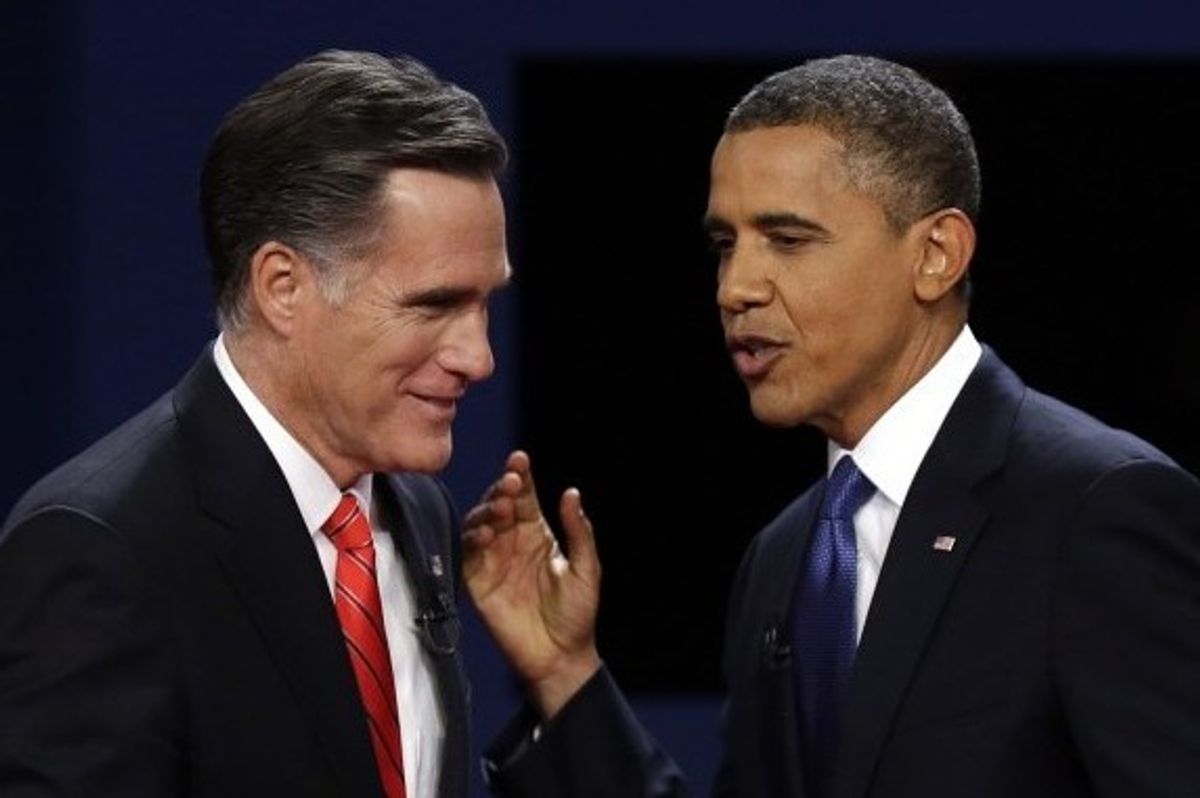 It’s been a few decades since then-House Speaker Tip O’Neill first referred to Social Security as “the third rail of American politics,” but judging from the way the candidates in this election have avoided the subject, it still has plenty of juice left. There was a brief dust-up last fall when Rick Perry claimed the program was a Ponzi scheme, but his subsequent flameout in the Republican primaries was so spectacular that the details were quickly forgotten. Since then, most of the focus has understandably been on Paul Ryan’s plan to turn Medicare’s guaranteed benefit into a voucher that grandma and grandpa can add to their coupon clippings. If we’re really lucky, sometimes we even get to debate the wisdom of dismantling Medicaid. But in the last two debates, the candidates have made statements about Social Security that raised more questions than they answered and suggested that the program’s future may be in doubt regardless of the election’s outcome.

Aside from the fact that President Obama seemed to have downed an entire bottle of Nyquil before his first debate with Mitt Romney, one of progressives’ biggest gripes about his performance concerned his decision to take Social Security off the table. “You know, I suspect that, on Social Security, we’ve got a somewhat similar position. Social Security is structurally sound,” Obama said last Wednesday, adding that “It’s going to have to be tweaked” but “the basic structure is sound.” That raises two questions: First, do they actually agree, or was Obama overcome by the spirit of compromise that sometimes compels him to give his opponents the benefit of the doubt when they’ve done nothing to earn it? Second, and perhaps even more importantly, exactly what sort of “tweaks” would the candidates support?

Sadly, we didn’t learn the answers to either of these questions, since moderator Jim Lehrer is allergic to follow-ups, but commentators on the left have hazarded a few guesses, and most of them aren’t very optimistic. Writing at The American Prospect, Robert Kuttner makes one of the stronger cases for why we should worry about Obama’s commitment to preserving Social Security benefits. He notes that Romney has pledged no changes to Social Security for those in or near retirement, which carries the unsubtle implication that everyone else is probably screwed. But Kuttner argues that instead of going on the attack, the Bowles-curious Obama “is softening up public opinion to accept very similar cuts” and “giving away what should be one of the clearest differences with Romney.” Dean Baker concurs that “tweak is a code word used by people who want to cut Social Security but lack the courage to say it explicitly.”

While it might be safer to assume the worst, it would be more charitable to read Obama’s comments as an acknowledgment that there are policy tweaks that would genuinely strengthen Social Security. Jeff Madrick provides a good overview of some ways we could extend the program’s solvency without reducing benefits or raising the retirement age. He also notes that Social Security is in no real danger and that fixing its finances is a fairly easy task, even though it’s often lumped in with Medicare and Medicaid as part of an all-encompassing “entitlement crisis.” But raising the cap on payroll taxes doesn’t seem to be the type of tweaking Romney has in mind, and even with no changes the program is projected to pay out full benefits for another 21 years. So why wouldn’t Obama choose to heighten the contrasts instead of conceding the argument before it’s begun?

That question only became more urgent at last night’s vice presidential debate, as Paul Ryan defended his support for privatization. Responding to moderator Martha Raddatz’s comment that “Medicare and Social Security are going broke” (they’re not), Ryan agreed that “these are indisputable facts” (see above) and argued that “if you reform these programs for my generation, people 54 and below, you can guarantee they don't change for people in or near retirement.” Well, that’s great for them, but what does it mean for the rest of us who were sort of planning on growing old one day?

Ryan, who once derided Social Security as a “collectivist system,” is the author of a failed plan that would have transferred some Social Security funds into private investment accounts (more on that in this great piece by Mike Konczal and Bryce Covert). Last night, Ryan again claimed that privatization would “let younger Americans have a voluntary choice of making their money work faster for them,” whatever that means. It’s certainly true that if his plan had come to fruition after he originally proposed it in 2004, their money would have disappeared a lot faster during the financial crisis. Luckily, that proposal became so toxic when President Bush tried to pass it that his own party wouldn’t allow it to come to a vote. That’s probably why Ryan took care to point out that Mitt Romney doesn’t support such a plan. Instead, Romney wants to “slowly raise the retirement age over time,” an extremely regressive policy that would disproportionately hurt the poor people who most depend on Social Security. What a relief.

Biden offered a much stronger contrast on Social Security than Obama did, but he still left some questions unresolved. He stated clearly and firmly that the Obama administration would not privatize Social Security, which is the least we can expect from a Democrat given that the public version is one of his party’s greatest legislative achievements. He also argued that “to cut the benefits for people without taking other action you could do to make it work is absolutely the wrong way,” which is more reassuring but still leaves the administration some wiggle room to accept cuts as part of a Grand Bargain™. It’s certainly a weaker promise than the one he made in August, when he told supporters, “I guarantee you, flat guarantee you, there will be no changes in Social Security” if President Obama is reelected. Thanks, Mr. Vice President, but is there any chance we can get that in writing?

If Social Security wasn’t so essential -- if it didn’t lift millions of elderly people out of poverty, offer peace of mind to all Americans in their retirement, or provide critical survivors benefits that Ryan acknowledges his own family received – it might be easier for progressives to accept this kind of hedging as part of the vagaries of messaging in an election year. But Social Security really is that important, and it has powerful allies arrayed against it in Washington who make little secret of their desire to take an axe to the program. It deserves to have an equally powerful and committed advocate defending it in the White House. It’s clear that Mitt Romney won’t fill that role, especially after he chose the architect of privatization as his running mate and heir apparent. Barack Obama still could, but progressives will have to convince him that there’s no room for ambiguity.