Best iPhone 5 cases on the market

Brand new phone? Keep it safe in a Switcheasy Tone 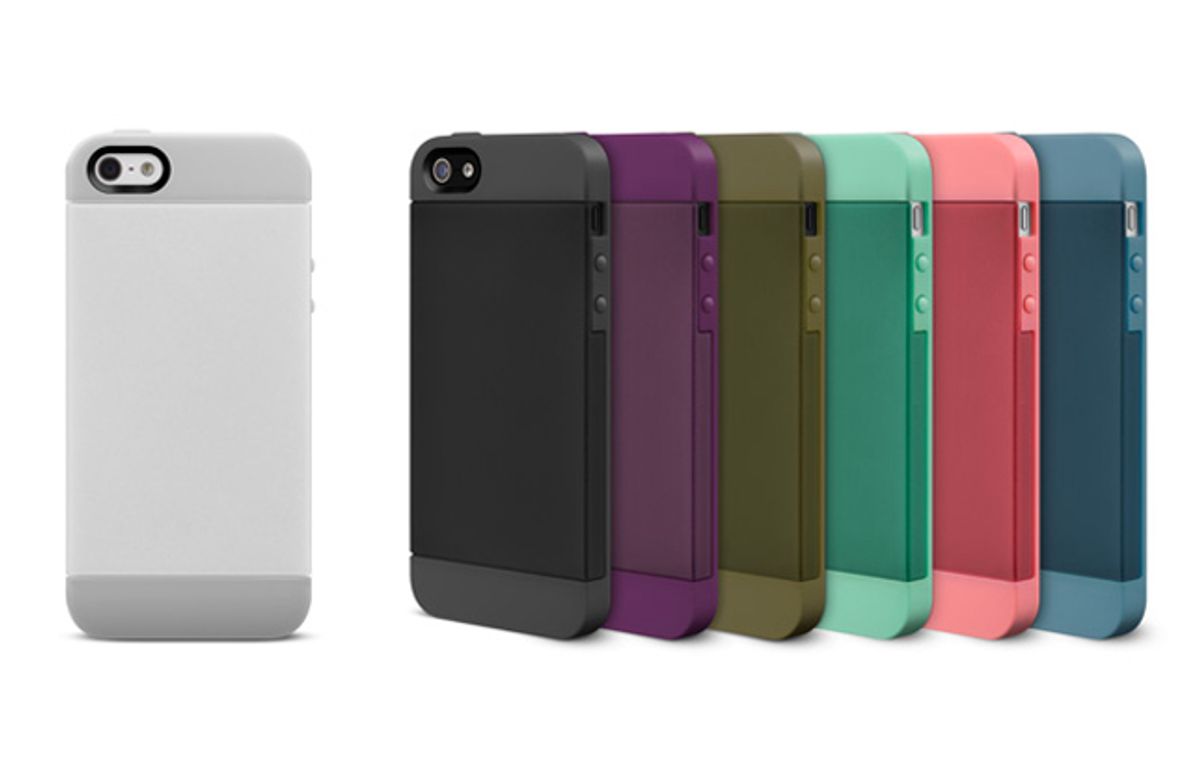 Think an iPhone deserves to be carried "nude" and caseless? You will change your mind after your first few dings on the new handset, which has a much softer aluminum frame than the old stainless steel band on the iPhone 4s. After trying out most of the iPhone cases currently on the market, I’m using the Switcheasy Tones to protect my iPhone 5. It’s exceptionally durable and unobtrusive, and it's a great value at $25.

Unlike the iPhone 4/4S, the iPhone 5's perimeter band — the outer edge that includes the sleep/wake button — is made of aluminum, which scratches more easily and warrants a protective layer.

After getting a launch-day iPhone, I tested cases now available from every major brand. As of now, I’ve looked at all available models from: Belkin, Incase, Otterbox, Speck, STM, and Incipio. Other brands including Ballistic, Case-Mate, Element Case, Grove Made, and Griffin won’t have samples ready until later, and I don't expect any of these cases on the horizon to be better than our current pick, based on reviews of past models with the same design as the upcoming cases.

With this first batch, I conducted drop tests, judged everyday usability, and evaluated each model's aesthetics. For the cases that are updates to previous generation models, I researched past reviews to spot design updates and improvements. I also spoke with other expert reviewers to see what they're using.

I looked specifically at slim, everyday-use cases, as opposed models with protection from severe trauma, many of which sacrifice compactness and usability. In this everyday-use category, and this should apply to a majority of iPhone 5 owners, a case needs to stand up to general use and abuse, like waist-high drops onto concrete, or a bouncy ride in a packed messenger bag.

The case should cover enough area on the phone to make it withstand impact from different angles while being thin enough to never make basic operation difficult. This applies particularly use of the sleep/wake button, vibrate on/off switch, and the volume buttons. A good case must also allow access to all the plugs without obstruction. I don’t like using a screen protector because it often changes the iPhone screen's responsiveness and a good case should come up above the glass to protect it if you lay it face-down. Almost every case we tested included one, if you insist on using it.

The Switcheasy Tones series nails all these requirements. It's an update of the Eclipse.

Like the Eclipse, the Tone is made from hard polycarbonate, rubber, and the edges are reinforced with thermoplastic polyurethane, which, even after spill onto concrete, hides tears and scratches. The lip surrounding the front screen keeps the glass from potential scratches when laid flat face-down. Switcheasy sandblasts the exterior plastic, which makes the plastic smooth and pleasant to touch, but grippy enough to stay put in-hand. Unlike glossy cases, the surface won't show fingerprints. The rubber portions are set at the top, bottom, and parts of the side. It's sparse enough on the surface to keep the phone from getting stuck inside a pocket or bag.

Unlike the Eclipse, the Tone has a cover for the sleep/wake button on the top. Because the case fits the iPhone so well, the button cover preserves the tactile click that lets you know it’s been depressed fully. Same for on the sides, where the volume up and down buttons function the same way, something especially practical when using the volume up button as the camera shutter release. The vibrate on/off switch sits in a recess, but the case is slim enough that it's easy to activate with a swipe from one finger. On the back, the opening for the lens, even on the white case, is lined in black to absorb glare.

The perforations on the bottom line up precisely with the phone’s speaker holes, which means very little interference from the case when using speakerphone. The Lightning connection slides easily into the bottom plug without catching on the case, and all but the most outdated and blunt headphone plugs will fit past the case into the headphone jack.

In the $25 package, Switcheasy includes a cornucopia of supplementary protection: a transparent front and back cover with a hard plastic squeegee for smoothing bubbles, a microfiber cloth, two protective plugs for the Lightning outlet, and two more plugs for the headphone jack. I got lots of use from the cloth, and, especially if you're in dusty conditions, the plugs for the headphone jack and Lightning connection will keep gunk from sneaking inside the circuits, which an Apple Genius told me is a major cause of iPhone malfunctions.

Nick Guy, iLounge’s accessories editor and the authority on Apple cases, personally uses the Tone for his iPhone 5. The Eclipse on which the Tone is base earned the only straight A recommendation from iLounge (along with another Switcheasy model) for an iPhone 4/4S case. The iPhone 5 update is similarly impressive.

Right now, reviews of the Switcheasy Tones are scarce. Besides Nick Guy’s personal advocacy, Firstpost.com and 91mobiles.com both give a video review. Firstpost gives it a 4 out of 5 saying it’s a “good value for your money…but a bit of a bear to remove it, take your time.” Mike, the “Detroit Borg,” says “Overall, it’s a very simple, but well-designed and well-made case that checks all the right boxes for me.”

If I were searching hard to find a grievance, I’d say that the stiff back makes it slightly difficult to remove the phone, but no more so than most unibody cases. Oh, and the Lightning and headphone jack plugs are difficult to remove and easy to lose. But those are minor complaints of an overall stellar package.

Other cases now available do their job, too, but they have design features that keep them from matching the Switcheasy’s well-rounded execution.

Switcheasy also makes the Nude and Colors models for the iPhone 5. The Colors line is available in a spectrum, and the M&M-style home button cover is pleasant to depress. It's more for show, as the floppy rubber has almost no structure, which means it doesn’t grip the phone snug around the edges.

The Nude is more minimalist than the Tone or Colors, and covers only the sides and the back, with a removable plug for the bottom openings. The recessed lip means that if the phone falls face-down, or you set it down on a table, the glass is suseptible to scratches.

Speck’s CandyShell line was an iPhone 4 standout for being protective and good looking, if you didn't mind lurid tones. The iPhone 5 versions are solid, but design details keep them from being our top pick. The Flip model’s opening allowing for docking is rendered mostly irrelevant because of the tiny Lightning connection, and the fact that there’s no dock yet available.

The Grip model is a solid bet, but unless you’re really afraid to drop the phone, the rubber ribs on the back make it hard to remove from a pocket.

The FabShell works, too, especially if you want to have a case with some flair, but its thick rim and small sleep/wake button add bulk.

STM, makers of one of my favorite iPad cases, has the Opera and Harbor models, with the Arvo kickstand model coming in late October. The Opera feels similar to Speck’s PixelSkin casing — textured TPU that absorbs shock like rubber, but won’t stick to every surface. Unfortunately, the top and bottom rims aren’t quite snug against the phone, which causes the corners bend back. The recess for the sleep/wake button also makes it more difficult to depress than if it had covers for the switch.

The Harbor has a flip-down bottom that lets you slide the phone into the top section of the casing, then close it shut. The design lets the phone sit more securely in the casing than with the Opera, and the outer lining feels reminiscent of the iPhone's smooth contours. The raised outer lip, like on the Opera, means you can set it face-down without it touching the table. But, also like the Opera, the Harbor also hides all the buttons in recesses, making them slightly difficult to depress.

Belkin’s ViewCase is a good value at $20, and I like how the clear back leaves the iPhone’s polished hindquarters in full view. But that same film shows fingerprints clearly and gets scratched by dirt. If you were a fan of Apple’s iPhone 4 Bumper, this model is similar.

Incipio has five different iPhone 5 cases, and among them, I found the Feather to be the pick of the litter. It’s minimalist and snaps on like the Switcheasy Nude, but the lip around the screen reaches up slightly, so you can set it face-down. The faux brushed-metal rear looks like the iPhone’s actual handsome back, but the side’s “Plextonium” material feels like it’d shatter if dropped on a hard surface.

Otterbox makes an everyday-use case called the Commuter, a smaller alternative to the unweildy Defender. The Commuter holds the phone in a soft rubber holster, which slides into a hard plastic casing. The bottom section’s protectors for Lightning and the headphone jack keep out dirt and dust, and the case feels like it’d survive a one-story drop. For constant use, however, the high lip around the front makes it hard to reach over to the screen with your thumb, and the sleep/wake trigger requires some muscle to depress. If you are getting into gnarly situations and can’t hold out for the new Lifeproofcase, the Defender will keep your phone safe at the cost of a less responsive screen and a chunky, protruding exterior.

Incase, a regular on Apple Store shelves, makes the most basic cases of the bunch, and also the least-durable. Their Slider model is exactly what it sounds like. Pull off the bottom, slide in the phone, and slide the bottom back on. The only good thing is the easy installation. Besides that, the recesses for the buttons make them difficult to press, and the plastic feels so flimsy that it makes the phone itself feel cheap and brittle. When I pushed down the sleep/wake button, the phone always slid down and pushed the case ends apart. The Snap case doesn’t have that same problem, but it’s made of the same cheap-feeling plastic.

In the end, the Switcheasy Tones is the case I find to have the fewest flaws.

What to Look Forward to: We’ll be testing and researching cases from Ballistic, Case-Mate, Element Case, Grove and Griffin as soon as they’re available. Even if the new models improved drastically on their precessors, you’ll be more than safe investing in the Switcheasy Tones case, which is what I'll be using for the foreseeable future.