"Master of the Mountain": The real truth about Thomas Jefferson 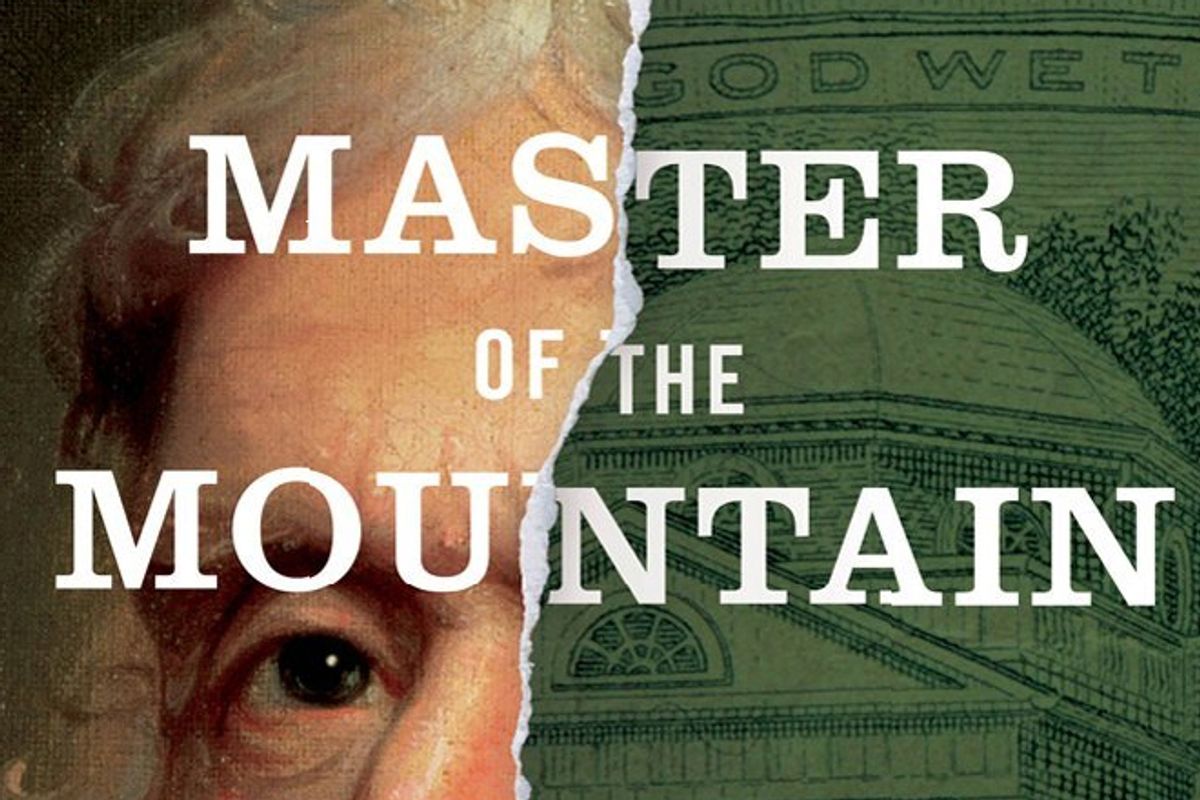 No founding father wrote more eloquently on behalf of liberty and human rights than Thomas Jefferson, and none has a more troubling record when it comes to the "peculiar institution" of slavery. At present, the popular understanding of Jefferson's shilly-shallying on this issue doesn't extend much deeper than knowing smirks about Sally Hemings and the (unacknowledged) children Jefferson fathered with her. We tend to assume that the dirtiest secrets of the past have to do with sex. But, as Henry Wiencek explains in his new book, "Master of the Mountain: Thomas Jefferson and His Slaves," the real filth is in the ledger books.

Like Wiencek's admirable 2003 book, "An Imperfect God: George Washington, His Slaves and the Creation of America,""Master of the Mountain" is founded on a close examination of its subject's domestic life and finances. The results are anything but mundane or dry, however. I rarely find myself recommending a book that has, at points, made me physically nauseated, but that's how palpably Wiencek conveys the obscenity of slavery. His account of Jefferson's evolving and convoluted position on the subject is all the more damning for his restraint. Ours is an age of inflated rhetoric, when everyone takes the opportunity to fulminate from the highest available horse whenever possible. Wiencek's method -- to present the facts, often in the form of the life stories of enslaved men and women, in a humane, straightforward manner, allowing the reader to form her own interpretation before he presents his -- makes for a far more persuasive and devastating indictment. Every American should read it.

As depicted by Wiencek, the older Jefferson resembles a modern-day 1-percenter, building and then rebuilding the lavish estate and plantation of Monticello, engaging in risky financial speculation, mortgaging his property (the most valuable of which happened to be human), coolly calculating his return on investment, and enlisting middlemen to do the dirty work required to operate such enterprises. Then he cloaked the whole caboodle in high-flown double talk about freedom, occasionally stooping to blaming the people he owned for their predicament.

It was not always so. In his youth, Jefferson condemned slavery as an "execrable commerce" and made several (thwarted) legislative efforts to abolish or ameliorate it. He attempted to insert abolitionist statements into the Declaration of Independence; as is, the Declaration struck some regional governments as grounds for outlawing the owning of human beings. There is evidence, Wiencek writes, that when Jefferson returned from France (where he had been U.S. ambassador) in 1789, he had every intention of training his slaves for freedom and manumitting them.

All that changed in the 1790s, when, as Wiencek writes, Jefferson became absorbed in the building and operation of Monticello while serving as both secretary of state and vice president. In a notation scribbled down as he was tallying up the plantation's profits and losses in 1792, Jefferson calculated for the first time a number that would prove more persuasive than any Enlightenment anthem on the rights of man. That number was 4 percent -- the profit he was making every year on the birth of black children. "The enslaved people were yielding him a bonanza," Wiencek writes, "a perpetual human dividend at compound interest." He could fund his dreams and assure his beloved daughter and her children a prosperous future, but only if his slaves' children could be sold and owned for the indefinite future.

Jefferson is traditionally depicted as a man of principle unable to extricate himself from a system he deplored. He failed in pushing the new nation closer to emancipation because, the story goes, "the times" were unready for it. He failed to free his slaves because it was against the law in Virginia or impracticable or simply unaffordable due to his debts and the financial difficulty of running a compound as wonderful as Monticello. Far from profiting by them, he claimed that his slaves were a burden he carried, a cost-ineffective obligation he assumed out of an excess of paternalistic concern. According to this legend, Jefferson treated his slaves kindly, prohibited the use of the whip and was regarded with universal reverence within the small sanctuary he created.

Wiencek effectively demolishes this picture -- with the possible exception of the reverence bit. Some of Jefferson's slaves did attempt escape, but others felt a profound loyalty. Martin Hemings (like Sally, a member of one of several extended families owned by Jefferson and his relations) famously refused to betray his master's location during the Revolutionary War, even when a British soldier pointed a pistol at his chest. The last recorded mention of Martin Hemings can be found in a letter Jefferson wrote to his daughter in 1795, in which the founding father lists the man who defended him so bravely as one of two items, along with a carriage, "to be disposed of" in a push to raise more funds.

As for the lash, Jefferson himself acknowledged, euphemistically, that some slaves "require a vigour of discipline to make them do reasonable work." Some of those people were boys of 10, 11 and 12, who had to be compelled to labor in a nail factory that brought in a tidy $2,000 per year -- enough to pay the annual grocery bill for the plantation's white household. Jefferson, Wiencek writes, "hated conflict, disliked having to punish people and found ways to distance himself from the violence his system required." His unfortunate (and rather tormented) son-in-law, Col. Thomas Mann Randolph, usually acted as the great man's factotum in this department. In the 1950s, when a historian came across a report from Randolph to Jefferson mentioning that children were being whipped at Monticello, the document was suppressed. (Randolph was so troubled by these experiences that he banned the whip from his own lands.)

Many important figures of the day pleaded with Jefferson to end slavery, or at the very least to free his own slaves: Thomas Paine, Lafayette, Tadeusz Kosciuszko. Kosciuszko even included a bequest of $20,000 in his will to pay for Jefferson to liberate some of his slaves, an amount that would have settled the debts that Jefferson said necessitated their continued bondage. Jefferson refused to do it. Wiencek recounts many examples of Jefferson contemporaries who freed their own slaves, including Edward Coles, who once remarked that it couldn't be any harder than getting rid of a king. Jefferson advised Cole against the plan.

Jefferson produced many justifications for this reluctance, which he was at pains to explain to the international supporters of American independence. In particular, the crucial pro-American faction in France was made up of people who, as Wiencek puts it, believed "that the ideals of the Revolution actually meant something." Jefferson's strategy was to placate and stall. At times he implied that abolition was imminent, and at others he detailed why it had to be put off. "Public sentiment" among Southern planters needed to come around to the idea first, he'd insist (as if it ever would), and then there were the blacks themselves, who he claimed were like feckless children who could not be trusted to work or plan for the future. He pointed to the dismal results of a Quaker experiment in 1770 that had set free "a parcel of lazy, worthless negroes."

In truth, that and other small-scale emancipations had been resounding successes, resulting in peaceable, productive communities of free blacks. Wiencek produces many instances in which Jefferson's statements about slavery and African-Americans can only be called lies.

Jefferson knew full well that blacks could learn marketable skills and provide for themselves because that's what the slaves at Monticello were already doing. Favored slaves became master carpenters, blacksmiths and cooks, whose valuable services the Jefferson family enjoyed for the cost of room and board. (In a nasty Catch-22, the better these workers got at their trades, the less incentive their white masters had to free them.) Field slaves received such paltry rations that they had to grow their own food on the small plots of land they were apportioned. They went so far as to produce a surplus, which they sold to the main house. From these purportedly irresponsible and undisciplined people were chosen individuals Jefferson trusted with important managerial duties at Monticello.

Jefferson professed a particular horror of miscegenation; it loomed large in his excuses for why emancipation had to be postponed until it was possible to immediately remove black Americans to some distant land. Yet his household was staffed by his wife's mixed-race relatives, the children of her father and his enslaved mistress. Eventually, Jefferson's own mixed-race children became his possessions and servants, one of them resembling his father so closely that an unwary dinner guest was struck speechless when he lifted his gaze and spotted the boy standing behind the man at table.

"The difficult truth," Wiencek writes, "is that for decades Jefferson skillfully played both sides of the slavery question, maintaining his reputation as a liberal while doing nothing." It was simply in his best interests to perpetuate slavery, and that's what he did, applying his practical genius to modernizing the peculiar institution to adapt to a new century and an expanding nation. The contemporary image of Jefferson as confounded by the conflict between his idealism and the limitations of the real world strike Wiencek as a last-ditch attempt to redeem a hero whose actions simply don't jibe with his stated values. In short, we try to persuade ourselves that the author of some of our most inspiring political works was not a self-serving hypocrite. But given the bountiful evidence offered in "The Master of the Mountain," it's now impossible to see him any other way.