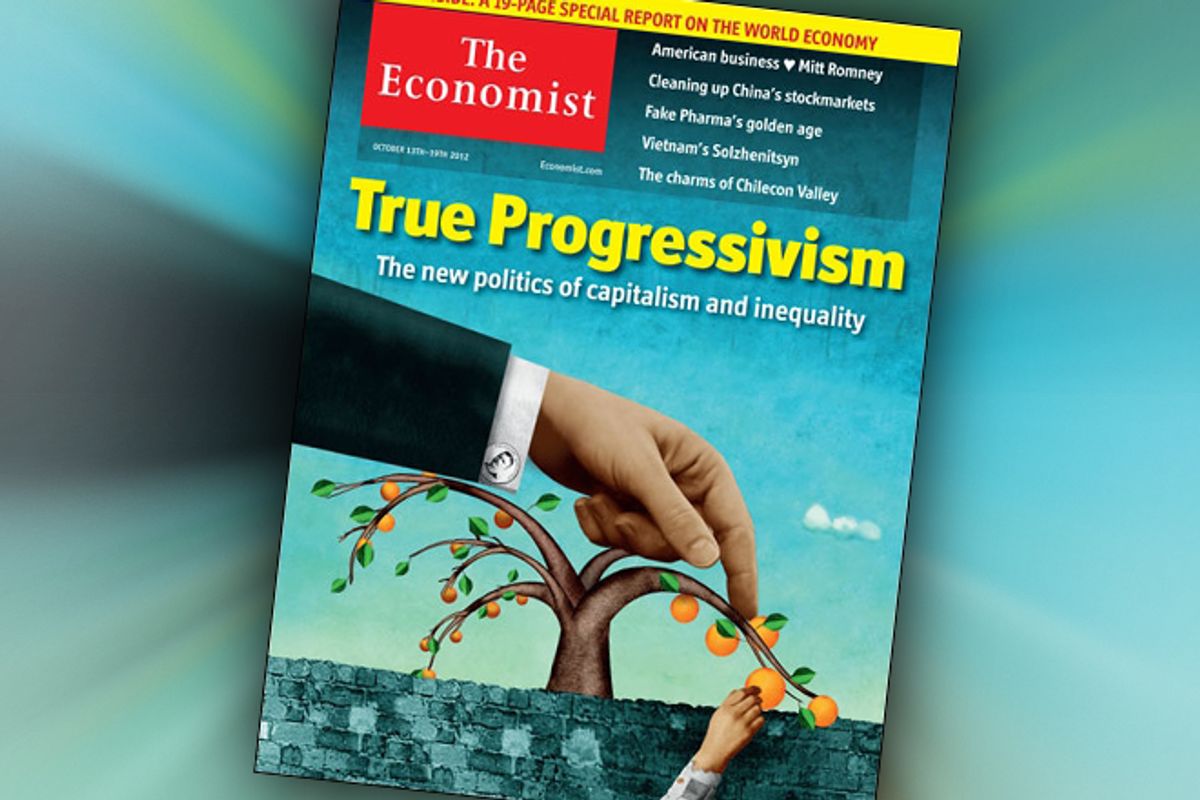 I have a confession to make:  I quit paying attention to the Economist more than a decade ago.  I am not tempted to resume reading the London-based publication, even though every few years a columnist, invariably on the center-right, touts it as the world’s greatest magazine. In light of the ongoing collapse of print journalism in the age of the Internet, that claim could be true and yet not very impressive, like an individual’s status as the greatest concert pianist in Paraguay.

The Economist owes its wide circulation and reputation, I suspect, to its breezy summaries of what is going on in parts of the world that get very little coverage in the English-speaking press.  On an airplane you can read the magazine’s knowing and sarcastic summaries of what is happening in sub-Saharan Africa or South America and conclude that you now know all you need to know about those regions.

I have no way to judge how accurate the Economist’s regional overviews are, though when the magazine does special sections about parts of the U.S. I know well, invariably there are howlers mixed with good reporting.  And in 2005 two Economist journalists wrote a book about American politics called "Right Nation," predicting perpetual conservative political hegemony, shortly before American voters threw the Republicans out of Congress in 2006 and out of the White House in 2008.

My problem with the Economist, though, is not with its reporting, but with its doctrinaire libertarian editorial slant.  The editors of the Economist are sophisticated enough to know that they need to moderate their free-market utopianism with the occasional nod to government’s role in R&D or the legitimacy of concerns about inequality.  Even so, the intellectual orthodoxy of the magazine reflects in origins in the Victorian heyday of classical liberalism, when utopian expectations for free markets inspired the slogan “Free Trade Is the International Law of God.”  The name of the magazine should be the Victorian Economist.

During the heyday of the Bubble Economy of 1980-2008, reading the Economist might actually have made you dumber.  Its editorial writers mistook, as the dawn of a golden age of globalization without barriers to trade, goods and the flow of people, what was in fact an unsustainable bubble caused by the toxic interaction of Asian state capitalism and mercantilism with debt-driven growth in the increasingly unequal, overly financialized U.S. economy.

If anything could make the 19th century libertarians at the Economist question the magazine’s quaint market utopian orthodoxy, surely it would be the Great Recession and the flaws in existing models of economic theory and practice that the crisis has exposed.  With this in mind, I was interested in an editorial in the Oct. 13 edition that I chanced across on another website, “True Progressivism:  A new form of radical centrist politics is needed to tackle inequality without hurting economic growth.”

Sounds good to me. I consider myself a progressive, I co-authored a book called "The Radical Center" (2001), I think we should pick good ideas from wherever we find them, on the left, right or center, and I’ve spent much of my time in recent years thinking about how “to tackle inequality without hurting economic growth.”

Unfortunately, the Economist has not undergone a conversion. What is calls “true progressivism” is fake progressivism but authentic libertarianism, in a moderate and genteel rather than an extreme Ayn Randian form.

To be fair, the magazine’s diagnosis of rent-seeking by the politically connected as one cause of growing inequality gets a lot right.  They are right to shine a spotlight on the ill-gotten wealth of Mexican oligarchs or Chinese communist princelings who have been enriched by their personal control of state monopolies.  And the editors are right to criticize subsidies to America’s financial sector:  “One reason why Wall Street accounts for a disproportionate share of the wealthy is the implicit subsidy given to too-big-to-fail banks.”

They are right as well to criticize the guild regulations of rent-seeking professions:  “One reason why Wall Street accounts for a disproportionate share of the wealthy is the implicit subsidy given to too-big-to-fail banks. From doctors to lawyers, many high-paying professions are full of unnecessary restrictive practices.”  They justly criticize welfare for the affluent, in the form of tax expenditures like the home mortgage interest deduction:  “And then there is the most unfair transfer of all — misdirected welfare spending. Social spending is often less about helping the poor than giving goodies to the relatively wealthy. In America the housing subsidy to the richest fifth (through mortgage-interest relief) is four times the amount spent on public housing for the poorest fifth.”

There is nothing here with which any radical centrist or true progressive could disagree.  Unfortunately, when the Economist goes from problems to solutions, it merely reheats the intellectual leftovers from last night’s Tea Party.

According to the Economist, “School reform and introducing choice is crucial: no Wall Street financier has done as much damage to American social mobility as the teachers’ unions have.”  Really?  The top few percent in the U.S. have engrossed about half of all of the gains from economic growth in the last generation, unregulated Wall Street firms helped cause the greatest global economic crash since the 1930s—and the greatest threat to social mobility in America is teachers’ unions?

If the editorial writers of the Economist had done their homework, instead of lazily repeating the propaganda of American right-wingers, they would have discovered that non-Hispanic white Americans are near the top of international educational achievement rankings, while the particular educational challenges of the inner-city black poor and low-income Latin American immigrants were not created by teachers’ unions and cannot be solved by destroying them.

If the editors of “the world’s greatest magazine” had bothered to do some research, instead of parroting right-wing talking points, they would have learned that for three decades campaigns for school choice have failed in the U.S. because suburbanites, including suburban Republicans, are satisfied with their suburban public schools — unionized teachers and all.  And if the Economist lived up to its reputation as a great magazine, its editors would have had the intellectual honesty to point out that the world’s best systems of K-12 education outside the U.S. are all public, with much more centralized funding.

Even their sensible proposal for increased funding for preschool education shows political ignorance or naivete. They suggest that cutting entitlements for the elderly by slowing the rate of increase could free up funds to be spent on children:  “Some of the cash could go into education.”  This is a typical right-wing talking point: We are overspending on the elderly and underspending on the young.  But the elderly in the U.S. have paid for their entitlements partly or wholly with payroll taxes, and it’s absurd to suggest that federal payroll tax revenues could somehow be diverted to pre-K schools, which are funded mostly at the state and local level. It is unlikely that a Congress conservative enough to cut entitlement spending on the elderly would compensate by dramatically increasing federal aid to state and local education.

Having veered off the road of “true progressivism” to the right, the Economist plunges into the ditch of brain-dead conservatism with its next allegedly “radical centrist” or “progressive” reform:  replacing universal social insurance with stingier, means-tested programs:

Next, target government spending on the poor and the young. But the biggest target for reform is the welfare states of the rich world. Given their ageing societies, governments cannot hope to spend less on the elderly, but they can reduce the pace of increase—for instance, by raising retirement ages more dramatically and means-testing the goodies on offer.

“True progressivism,” according to the Economist, means sparing the high incomes of “wealth-creators” from excessive taxation, even as cuts are imposed on the social insurance of working-class majorities in the Western world:

Last, reform taxes: not to punish the rich but to raise money more efficiently and progressively … Across the rich world, welfare states are running out of money, growth is slowing and inequality is rising — and yet the left’s only answer is higher tax rates on wealth-creators.

In the lexicon of the Economist, as of the Tea Party, the rich are “wealth-creators” and everybody else presumably is a “taker” rather than a “maker.”

Elsewhere, the editorial favors eliminating tax loopholes that disproportionately favor the rich, reducing the gap between taxes on wage income and capital gains (presumably by raising tax rates on the latter) and raising property taxes “that are paid disproportionately by the rich.” These are all valid ideas, as is one they do not mention, the introduction in the U.S. of a value-added tax like the one used by every other advanced industrial country.  But anyone reading the Economist’s “true progressive” manifesto is less likely to remember these limited proposals for taxing the affluent than the stern warning against punitive taxes on “wealth-creators.”

“True progressivism,” according to the Economist, requires addressing rising inequality by destroying teachers’ unions and cutting expenditures on the elderly, while avoiding major tax increases on “wealth-creators.”  If you think that American public schoolteachers are more responsible than Wall Street for growing inequality in the U.S., and if you think that the richest people in the U.S. and the world are accurately described as “wealth-creators,” then I encourage you to buy a subscription to the Economist.  I prefer to read libertarian propaganda without the genteel camouflage.