The senator's fear-mongering isn't just morally repugnant. It's completely at odds with his libertarian principles 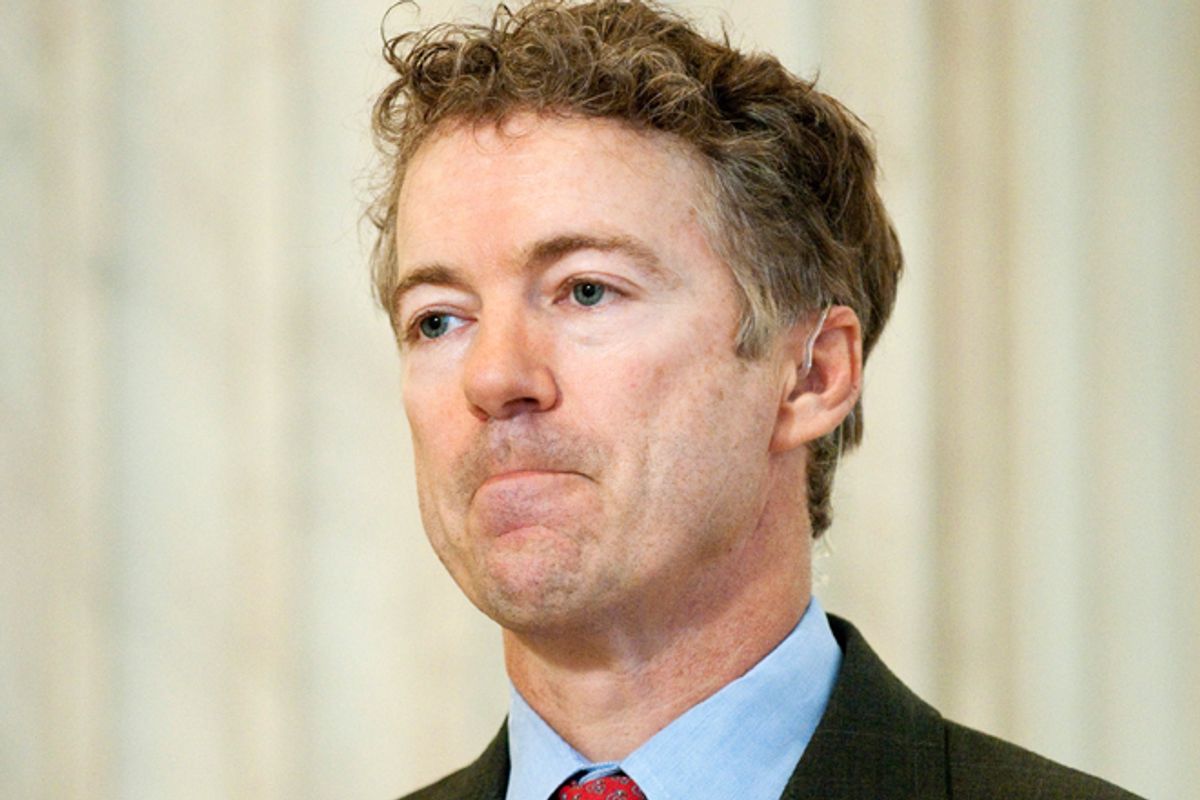 Kentucky Republican Sen. Rand Paul has worked hard to distance himself from his party’s hawkish foreign policy, carefully cultivating an image as libertarian hero that may one day carry on the legacy -- and potentially presidential ambitions -- of his father, Rep. Ron Paul. He goes out of his way to criticize his party’s foreign policy, writing an Op-Ed on CNN.com last week attacking Mitt Romney’s “bellicose[ness]” in the Middle East during the debate. Paul has railed against military interventionism, vowed to cut the defense budget, called for a reduction in military bases overseas and otherwise alienated himself from the party’s powerful neoconservative wing as much as possible.

But there’s one area where Paul’s self-described libertarian freedom agenda is trumped by the ugliest type of neoconservative fear-mongering: Muslim-baiting. RandPAC, Paul’s political committee, is spending hundreds of thousands of dollars attacking three Democratic senators for voting for foreign aid to Muslim countries. Paul introduced a bill to cut off foreign aid to Egypt, Pakistan and Libya.  While there are some totally valid arguments supporting his bill, instead of making them, the commercials go for the nastiest attack possible, essentially accusing Sens. Joe Manchin of West Virginia, Bill Nelson of Florida and Sherrod Brown of Ohio of siding with jihadis and terrorists over Americans.

“Instead of putting hard-working West Virginians first, you voted to send billions of taxpayer dollars to nations where they shout ‘death to America,’ kill our Ambassador and allow radical Islamists to burn our embassies,” a petition on the RandPAC website accompanying the Manchin ad reads. “As one of your constituents, I demand that you start putting the interest of American taxpayers above those of Anti-American regimes and radical jihadists overseas.”

The ad was vicious enough that Republican Sen. Lindsey Graham crossed party lines to defend Manchin. "I'm sorry that my colleague Sen. Rand Paul felt that he needed to get involved and has gotten involved," Graham said on a conference call with reporters. That comment drew a quick rebuke from Paul, who accused Graham of “supporting a Democrat in a general election.”

But there seems to be a pattern here: When Muslims come into the picture, Paul's laissez-faire politics go out the window. Paul -- whose championship of private-property rights has led him to oppose even the Americans With Disability Act -- didn’t support the right of Muslims to build an Islamic community center in lower Manhattan near ground zero. Instead, he said Muslims should contribute the money that would have been used to build the mosque to the 9/11 victims' memorial fund.

What's more, Paul, who proposed legislation to curb what he saw as the TSA’s overly invasive powers to pat down fliers, admonished the agency last year for its unwillingness to profile people based on their background. In 2010, he reversed his stance on the prison camp at Guantanamo Bay, going from opposing it to saying, “Foreign terrorists do not deserve the protections of our Constitution ... These thugs should stand before military tribunals and be kept off American soil. I will always fight to keep Kentucky safe and that starts with cracking down on our enemies.”

In May of last year, Paul, who adamantly opposes the Patriot Act as a terrible violation of civil liberties, called for keeping tabs on foreign students from the Middle East. “Let’s say we have 100,000 exchange students from the Middle East -- I want to know where they are, how long they’ve been here, if they’ve overstayed their welcome, whether they’re in school,” he said in a radio interview.

Even worse, in the same interview, the senator -- who touts himself as a strong defender of free speech -- called for imprisoning or deporting people who attend radical Islamic speeches. “It wouldn’t be that they are Islamic. But if someone is attending speeches from someone who is promoting the violent overthrow of our government, that’s really an offense that we should be going after -- they should be deported or put in prison,” Paul said.

Paul’s father was true enough to his libertarian  ideals to stand up to Rep. Michele Bachmann’s Muslim witch hunt. The son never did.