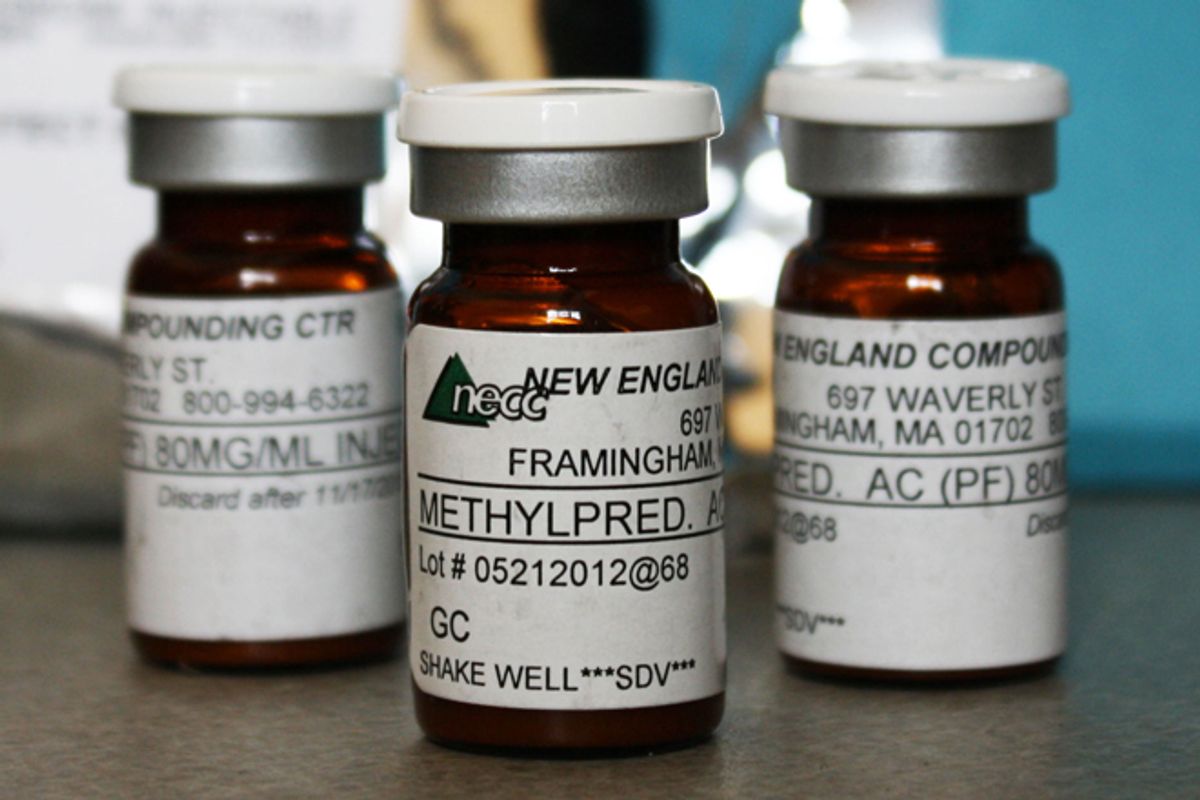 If the Democrats needed an opportunity to show voters what a deregulated market really looks like, the New England Compounding Center, the company responsible for the current meningitis outbreak, has served one up.

According to the Wall Street Journal, the Framingham, Mass., center made as many as “17,676 potentially tainted steroid injections, which were then shipped to 75 clinics in 23 states.”  So far 14 people have died and 170 have fallen ill from the contaminated shots.  The questions on everybody’s mind now are: How could this happen? And where was the Food and Drug Administration, the federal agency that's supposed to oversee the pharmaceutical industry?

How could it happen? Simple: There are almost no laws regulating pharmaceutical compounding, the process of making made-to-order prescriptions tailored to the unique needs of individual clients. This process used to take place on a small scale. But in the past 20 years, changes in the pharmaceuticals market allowed compounding to explode into a new industry of below-the-radar, unregulated mass drug production.

The government has been aware of the health risks posed by compounding for more than a decade.  In 1997, the Food and Drug Administration Modernization Act (FDAMA) put significant restraints on the ways pharmacists could compound drugs. But the Supreme Court in 2002 struck down the part of the law that regulated compounding, finding that prohibiting the promotion and advertisement of compounded products unconstitutionally restrained free speech. No federal legislation has been enacted since then to take the section’s place. Instead, each state has to set its own regulations for governing the country’s approximately 3,000 compounding pharmacies, which collectively pull in about $9 billion of annual revenue.

This kind of state-by-state regulatory framework, which incidentally mirrors the Romney/Ryan proposal for the country’s oil and gas industries, has brought us a shadowy pharmaceutical underworld with almost zero federal oversight.  Despite a 2002 FDA study that found 34 percent of compounded drugs failed basic tests and more than 200 known adverse compounding-related events between 1993 and 2000, there is very little the FDA can do to restrain these companies from producing and selling these dangerous drugs, which are used to fill more than 30 million prescriptions every year.

Several politicians (all Democrats) are calling for stricter regulations, though they have yet to offer specifics.  The previously invalidated section of the FDAMA, however, provides an easy blueprint to follow (minus, of course, the advertising regulation that SCOTUS found unconstitutional).  It’s hard to imagine such a bipartisan feat in today’s political climate, but the 1997 law actually passed unanimously in both the House and the Senate before President Clinton signed it into law.  There is no good reason that common-sense provisions like barring the duplication of drugs already commercially available and compounding in batches meant for more than one patient at a time should not get the same universal support now that they got 15 years ago.  Both would have prevented the current public health crisis.

But getting the right laws on the books only solves part of the problem. Even if legislation is enacted, the FDA still needs the resources to enforce it.  Right now, the 2013 federal budget allocates only $4.5 billion to the FDA.  Of that, the agency plans to spend only $1.2 billion to regulate the $300 billion pharmaceutical industry.  That is the entire budget to test and approve new drugs and to monitor the ones already available – and still the Romney/Ryan camp thinks it’s too much.  Romney has called the FDA an “attack on free enterprise” and the Ryan budget considers the agency “discretionary.”  Ryan has voted against a stronger FDA six times and given the chance, he would slash its budget drastically.

The presidential candidates have yet to comment on the outbreak. But the next time Romney or Ryan calls for deregulation or shrinking government, the Obama campaign should be ready to attack on both issues.  The meningitis outbreak might be only the beginning of what a Romney administration would mean for the public health.