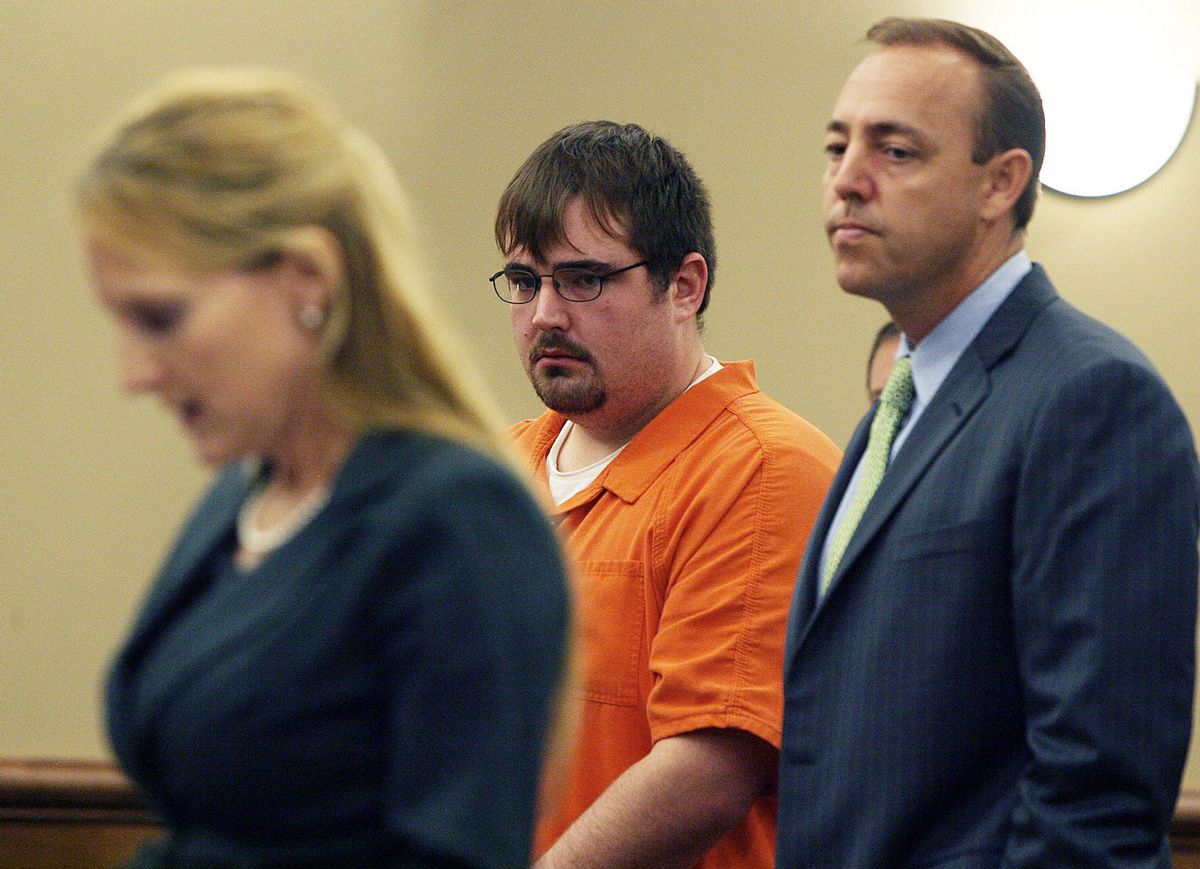 Hours after four members of FEAR, an anti-government militia largely made up of active-duty and recently discharged American soldiers, shot to death two teenage sweethearts in the Georgia woods last December, the group gathered around a backyard bonfire, desperately trying to destroy evidence of the crime.

“That didn’t work out so well,” prosecutor Isabel Pauley told a Liberty County, Ga., Superior Court judge Monday morning as a former Army medic became the second member of the dysfunctional band of brothers to agree to testify against his erstwhile comrades in the murders.

The couple was killed shortly before Christmas, prosecutors say, to keep secret the group and its bizarrely grandiose plans to overthrow the United States government through a campaign of terror and political assassinations.

FEAR, which stands for Forever Enduring, Always Ready, was based at the sprawling Fort Stewart Army base near Savannah. The group had allegedly amassed $87,000 worth of weapons and bomb-making material.

The former medic, Christopher Jenderseck, 26, pleaded guilty Monday in Liberty County Superior Court to violating the state’s gang act and to destroying evidence, although he told the judge he did not know initially what he was helping to do when he was called to a gathering of the militia on Dec. 6 – the day after the murders.

“I figured it out while it was happening,’’ said the shackled Jenderseck, who was dressed in an orange jail jumpsuit.

But Pauley, the prosecutor, said that had Jenderseck gone to trial the evidence was compelling that he did know what was happening and why.

Then he watched as his fellow militia members threw into the roaring flames spent shotgun shells, a cell phone and the clothes the shooters had worn the night before.

The clothes, Pauley said, “had blood and brain matter on them.”

As part of his plea agreement, Jenderseck, a college student at Bismarck State College, was given a sentence of six years and 11 months probation as a first offender, including one month for time served in jails in Liberty County and in North Dakota, where he was arrested in September.

If he does not continue to cooperate and testify fully, Pauley said, “He has 65 years hanging over his head.’’

So far, 10 people, nine of them either active-duty or former soldiers, have been charged in connection with the militia and the murder of Michael Roark, 19, also a former soldier at Fort Stewart, and his girlfriend, Tiffany York, 17, a photographer on her high school yearbook.

“There yet could be more indictments,” Pauley said.

Three members of FEAR, including Aguigui, have been charged with murder. Prosecutors say they will seek the death penalty.

In September, Pfc. Michael Burnett, 26, a member of the militia’s inner circle – “The Family’’ – was the first to turn on FEAR. As he faced a judge in a Long County courtroom, wearing Army fatigues and leg irons, Burnett gave a chilling eyewitness account of the gang’s delusional plans and dastardly effort to keep them secret.

Burnett said the young couple was lured to the woods late on the night of Dec. 5 with the promise of some night shooting, some of “the guy stuff’’ the group often engaged in.

Roark, who was discharged from the Army just days before he was killed, apparently helped the group purchase weapons. Prosecutors say the group was afraid that he might reveal what he knew.

Burnett said that Aguigui considered Roark to be “a loose end.’’ He said he tried to talk the group out of killing the couple. It was too late. The decision had been made. He said he did not want to go along that night, but Aguigui forced him by threatening to kill his infant son.

“Sir, if I could I would have stopped this from happening,’’ he said.

Instead, he joined Aguigui, Sgt. Anthony Peden and Pvt. Christopher Salmon, and they drove to the woods to meet Roark and York, who arrived in Roark’s black 2010 Nissan. The gang and Roark communicated with walkie-talkies as they drove through the darkness.

At the rendezvous spot, before York could even get out of the car, Peden allegedly walked up to the window and shot her in the head. Then he reached inside to check her pulse.

“She still had one,’’ prosecutor Pauley said. “He shot her again.’’

The teenager did not have a chance to be afraid, her mother, Brenda Thomas told Hatewatch.

Roark was not so lucky. Salmon allegedly yanked him out of the car and forced him to his knees. Then he shot him in the head. Twice.

“I just can’t believe,’’ Roark’s father, Brett told Hatewatch, “how evil these people are and how they stayed in the Army so long without the command structure doing something.’’

FEAR left the dead teenagers where they fell. A pair of fishermen found them the next morning. Near Roark’s hand was a walkie-talkie. The cover-up began almost immediately.

Burnett had purchased the gun that was used to kill Roark and York – a Taurus Judge revolver, which can fire either .45-caliber bullets or a .410 shotgun shell – a month before. After the killing, Burnett said, Peden “took the murder weapon back to his house and chopped it up into a bunch of pieces he said.’’

Pauley said the group returned to Salmon’s home on the base that night. At some point, Burnett said,  Aguigui ordered everybody who had been at the crime scene to take off the clothes they were wearing in the woods.

They wore several layers , hoping to “diminish the transfer of physical evidence,’’ Pauley said. They stuffed the clothing, along with the spent shotgun shells into a bag  and burned it the next night in Peden’s backyard off base.

Jenderseck said Aguigui called him and asked him to come over to a meeting of the group. He said he had no idea why. Once there, he built the bonfire.

Jenderseck said he first started hanging around the group shortly after Aguigui’s wife, Sgt. Deirdre Aguigui, 24, died in July 2011 at her home on the Fort Stewart base.  Prosecutor Isabel Pauley said the group purchased most of its weapons with money from a $500,000 insurance policy that Isaac Aguigui received after her death, a death Pauley called “highly suspicious’’ and still under investigation.

Jenderseck said Aguigui had reached out to him to help him cope with his wife’s death because Jenderseck had recently lost a relative. Jenderseck said he then began getting invitations to barbeques with the group where FEAR was sometimes discussed.

He said he was never officially asked to join FEAR but he eventually got the group’s symbol – the Greek letters alpha and omega – tattooed on his arm. Over time, he said, he covered the FEAR tattoo with another tattoo. “I was ashamed I let myself become a part of this,’’ he told the judge.

Pauley, however, said Jenderseck had the tattoo covered over after the murders and after he lied repeatedly to agents from the FBI and Georgia Bureau of Investigation. Pauley said he told investigators he had no idea about the existence of the tattoos or their significance.

“It’s no small thing to lie to the FBI in a domestic terror investigation,’’ she said.

She said Jenderseck eventually rolled up his sleeves and showed the authorities his FEAR tattoo. Shortly after, he had them tattooed over.

Brett Roark was in court Monday to hear and see Jenderseck for himself. He said he walked away filled with “contempt and anger.’’

“I was disgusted by his weakness,” Roark said. “He’s really trying to distance himself from what he participated in, covering up the slaughter of two kids.’’