Taking responsibility for the Benghazi tragedy, she drives her enemies to new heights of psycho-sexual rage 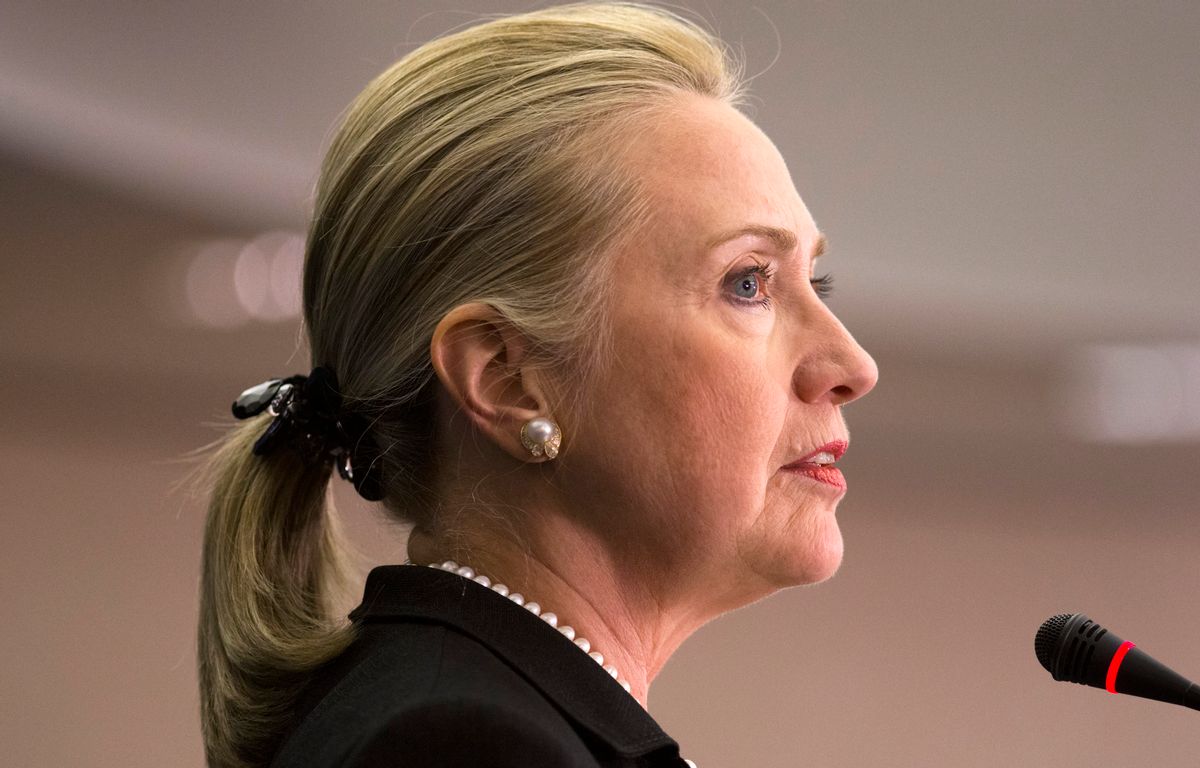 On the same day the right reached new paroxysms of Obama-loathing, thanks to a lurid and anonymously sourced Daily Mail story claiming Hillary Clinton would get even with President Obama for being made a scapegoat in the Benghazi tragedy, Hillary Clinton herself took responsibility for the Benghazi tragedy in a somber, dignified interview with CNN.

"I take responsibility," she said plainly. "I'm in charge of the State Department's 60,000-plus people all over the world (at) 275 posts. The president and the vice president wouldn't be knowledgeable about specific decisions that are made by security professionals. They're the ones who weigh all of the threats and the risks and the needs and make a considered decision." So much for her gunning for Obama and U.N. Ambassador Susan Rice as revenge for the White House throwing her under the bus.

It turns out Clinton had already told the Wall Street Journal that she took responsibility for the security problems exposed in the attack almost a week ago – but the paper declined to share that information with the world, saving it instead for a forthcoming profile. Proving that was terrible news judgment, if not a deliberate effort to withhold information that might undermine the right-wing story line that Obama and Joe Biden were scapegoating Clinton, the WSJ published the remarks last night, after CNN's interview ran.

"I take responsibility," Clinton told the Journal's Monica Langley. "I'm the Secretary of State with 60,000-plus employees around the world. This is like a big family … It's painful, absolutely painful."

As clear as Clinton's statements were, the right immediately used them to bash Obama. Fox's Steve Doocy claimed Clinton was "falling on her sword for the administration," while Laura Ingraham insisted she jumped "on the grenade the day before the debate." CNN contributor Erick Erickson wrote on his RedState blog: "Doesn't the buck stop with Barack Obama?"

But the award for most unhinged reaction goes to the Washington Post's Jennifer Rubin, who took to Twitter to unleash a psycho-sexual tirade against Clinton, Obama and even the former President Clinton. "First Bill humiliates her and now Obama does.. Hillary no feminist, more like doormat," Rubin wrote. She went on: "yeah once you take your Yale law degree and go to Arkansas you basically are putting your career in the hands of others." When Obama adviser David Axelrod tweeted in reply: "Sick. Mitt mouthpiece jumps shark," Rubin shot back: "so is Obama going to hide behind her skirt Tuesday night? Why would the president let Hillary end her career in disgrace?"

It's been clear for a while that the Clintons and the Obamas drive the right to surreal heights of psycho-sexual anxiety. They can't decide whether, with her Benghazi statement, Clinton is somehow emasculating Obama by taking responsibility that should be his, or being abused by him. First Rubin has him "humiliating" Clinton and then "hiding behind her skirt." Which is it? They can't appraise our first black president and his female former rival in anything other than the most degrading gender stereotypes. Axelrod is right: It's sick.

Funny, though, there's been no mention of Toby Hernden's Daily Mail "scoop" about Clinton's rage over being made a "scapegoat" by Obama and Biden, and her determination to throw the blame back on the White House. It was the rage of the right-wing blogosphere on Monday; on Tuesday, it was like it never happened. New talking points have been distributed, the old ones shredded. Again, there are legitimate questions about what happened in Benghazi, but we'll never get to them with this crowd of fabulists, frat boys and angry hacks like Rubin.