We're the face of food stamps

When my husband lost his job, we landed in the 47 percent -- and learned how cruel other people's judgment can be 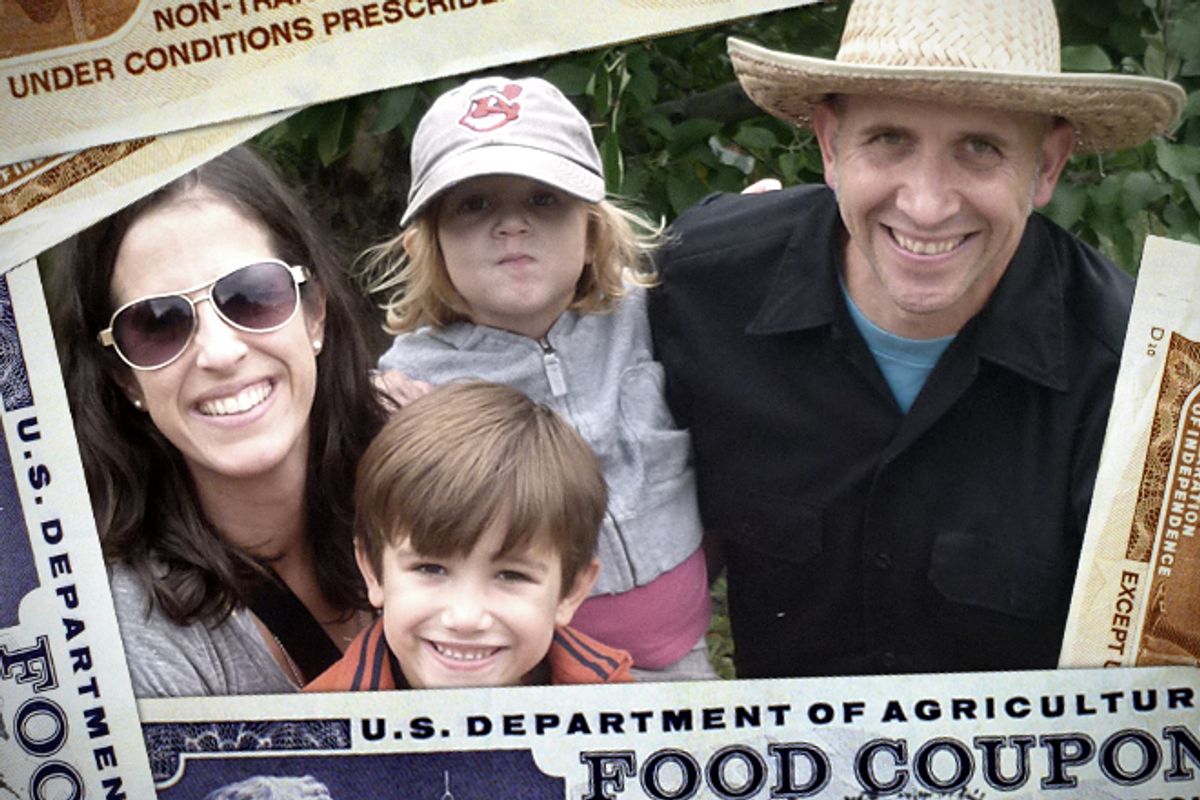 Last winter I ran into a friend pushing his two youngest children in a stroller. When I asked how he was doing, he told me he’d recently lost his job. I walked away thinking, “Thank God that’s not us.” Fast-forward seven months and now we’re the family people walk away from with a sigh of relief.

One day this summer, my husband came home early from work with the news he’d lost his job. Since then, we've gone through all the stages of grief, with a few additions of our own. I’ve gone into what I’ve dubbed “Mama Bear mode,” wanting to do everything with my husband and our two small children, maybe because I just don’t want to face anyone alone. “How are you doing?” is a hard question to answer in the rush of school pickup. So I keep my mate and cubs close, or we hibernate at home, trying to avoid scrutiny.

But even Mama Bears can get caught off-guard. A couple of weeks ago, I was out with my running group, and we got to talking about Romney’s now infamous 47 percent. A heated back and forth ensued about federal assistance and those who abuse it, with a few anecdotes tossed in for good measure. “Abby, you know you’ve seen the woman at Safeway using her food stamps and then hopping in her Mercedes,” one woman said.

Well, no, I actually had not seen that particular woman before. At least not until last month. But I do know that a man -- my husband -- was using food assistance at a Wegman’s and then driving away in our 13-year-old Subaru with 170,000 miles on it. Does that change the story? Should we sell our car and get a make and model more befitting of someone receiving federal assistance? Or maybe there is a grocery store designated solely for food assistance users? This is all new to me.

Wounded and embarrassed, I came home rattled from the run. The discussion had hit a nerve, and I brooded over our situation for days.

Collecting unemployment? Well, that I could stomach. After all, I’d worked before I was a stay-at-home mom, and I'd paid into the system. And my husband? He lost his job despite years of positive performance evaluations.

Sign up for medical assistance? Sure. COBRA payments would devour our monthly budget and after my son was hospitalized with a respiratory infection, I could rationalize getting help for the sake of my children.

But food assistance? That unraveled me. Completely. What would my running group say if they knew the truth about our situation now?

A few years ago, I heard a lecture by Kathryn Ruud, an independent scholar of linguistics who has published on the topic of polarizing political speech. Ruud’s current research — based on her study of propaganda techniques used around the world and throughout history — shows how polarizing language is employed in current political discourse in the U.S. I recently contacted Ruud to talk about her research and the implications it has for those receiving federal assistance.

According to Ruud, American public discourse is rife with language that creates an “us” against “them” mentality. She points to political talk radio, where commentators typically use one extreme case to represent the generic face of an issue. In this climate, where complex problems are framed in overly simplistic terms, she says, “It’s harder and harder to get accurate information and full information.”

For Ruud, one of the more alarming developments is the increase in the use of “dehumanizing imagery.” More and more, the needy among us are described as people leeching, sucking off of, or being a parasite on the system. “We’re right up to the edge with our language,” says Ruud. “We’re seeing that language being pushed.”

Ruud points out that American culture has always been about the individual striving to achieve. We want to work hard, be resourceful and succeed. But the current economy has put pressure on this ideal as more and more people lose their jobs through no fault of their own.

“The rhetoric has been so severe since 2007,” Ruud says. The divisive, extreme language once largely heard only on political talk radio is seeping into our discourse at work, in our communities and on the Web. Increasingly, that language is directed at anyone receiving government assistance.

For my husband and me, the rhetoric only serves to push us deeper into hiding. In the initial weeks after he lost his job, I was optimistic our situation would change quickly. I thought we’d be fine. We have savings and live modestly. We’d weather this storm.

But uncertainty about the future does things to a person. As weeks slip by and we near the three-month mark of unemployment, I find my husband awake at night more and more. The cost of a new dryer, the bill from a doctor’s office, and a truck that won’t start don’t add up to a good night’s sleep. He’s gone into his own “Papa Bear mode,” fretting about how we will get through the winter, if it comes to that.

We constantly juggle the scenarios and evaluate where to put our resources and time. As we both actively look for work, we endlessly discuss long-term plans — who could most likely find work with a higher salary, and whether we should take any job no matter the salary, even if it means losing money to pay for childcare for our 2-year-old daughter.

Just as Ruud says, the complexity of our situation cannot be distilled down into a simple scenario or singular course of action. We want to get off federal assistance as quick as we can. We wanted to get off it before we even had to use it. It doesn’t make us feel good or wholesome. I’m embarrassed we’re in this situation at this stage of our lives while other friends are bumped into a new tax bracket because of their dual incomes. On the flip side, I’m worried we’ll be judged for “abusing” the system since we have not depleted our life savings.

So my solution for the past two weeks? Don’t go grocery shopping.

In an effort to get some clarity on the topic, I spoke with Sophie Milam, director of nutrition assistance and budget policy for the nonprofit organization Feeding America. We spoke specifically about the Supplemental Nutrition Assistance Program (SNAP, formerly known as Food Stamps). Milam says the average length of time a new participant is on SNAP is eight to nine months. What skews the numbers and creates a picture of a population perpetually dependent on the system are the elderly, who are out of the workforce and therefore on a fixed income, and the disabled, who are unable to work. According to Milam, able-bodied adults and working families accept assistance for much shorter periods of time.

In 2008, Congress passed legislation that exempts retirement savings when applying for SNAP. Milam says, “The last thing you want to see is someone spending down all their savings when they just really need short-term assistance.” In addition, the legislation allows SNAP recipients to keep a certain amount of savings in a checking or savings account. Currently some advocacy organizations are pushing for an increase in these allowances.

While both Milam and Ruud acknowledge that some recipients abuse the system, they caution against stereotyping. The problem is “when you simplify and say all on assistance are freeloaders,” says Ruud.

In the case of SNAP, Milam says there is an incentive to work built into the system, which decreases benefits as a person earns income, but at a staggered rate. In practice this means that someone will benefit more by working and having their assistance reduced slowly (or stopped altogether when their income becomes high enough) than by remaining on SNAP long term.

As I have slowly come to terms with our current situation, I have started to venture out of our cave. It’s with a mixture of relief and sadness that I learn of other families lumped into the 47 percent. A former colleague and friend of my husband’s also lost her job this year. Her family spent six months receiving federal assistance, from unemployment to medical assistance to emergency cash. In recent years, she has battled cancer and watched the business she and her husband owned go under. Then she became “the woman at Safeway using food stamps.”

This summer she found a job in another state 1,600 miles away. Although she and her husband had to sell their home and her family won’t have health coverage for another 90 days until her new employer’s policy begins, she says she is “hopeful calm will be coming soon.”

And that friend pushing his little ones in the stroller? Food assistance recipient. He has more than 25 years' experience in his field and his wife has a master’s degree, yet “here we are, jobless.” His wife is working toward starting a private practice in her previous profession. Between unemployment, savings, tax refunds and side jobs he gets making custom furniture, they are getting by for now.

As for me and my family? I still think we will be fine in the end. On good days, I am confident one of us will eventually get a job and we will get back on track. But many days, insecurities muddy the confidence and clarity I have.

But I am certain of one thing: We need to stop judging others while they are grappling to find their own solutions. As a nation, we should stop looking at people in 47 percent chunks and start looking at them as individuals. Everyone has their own journey to make and story to tell. Because that woman at Safeway? She just might be a Mama Bear, too.

Abby Henson is a freelance writer and editor in the Washington, DC, area. She's written frequently on the topics of parenting and family and enjoys both writing and reading personal feature essays.