The president did exactly what he needed to in tonight's debate: He used Romney against Romney 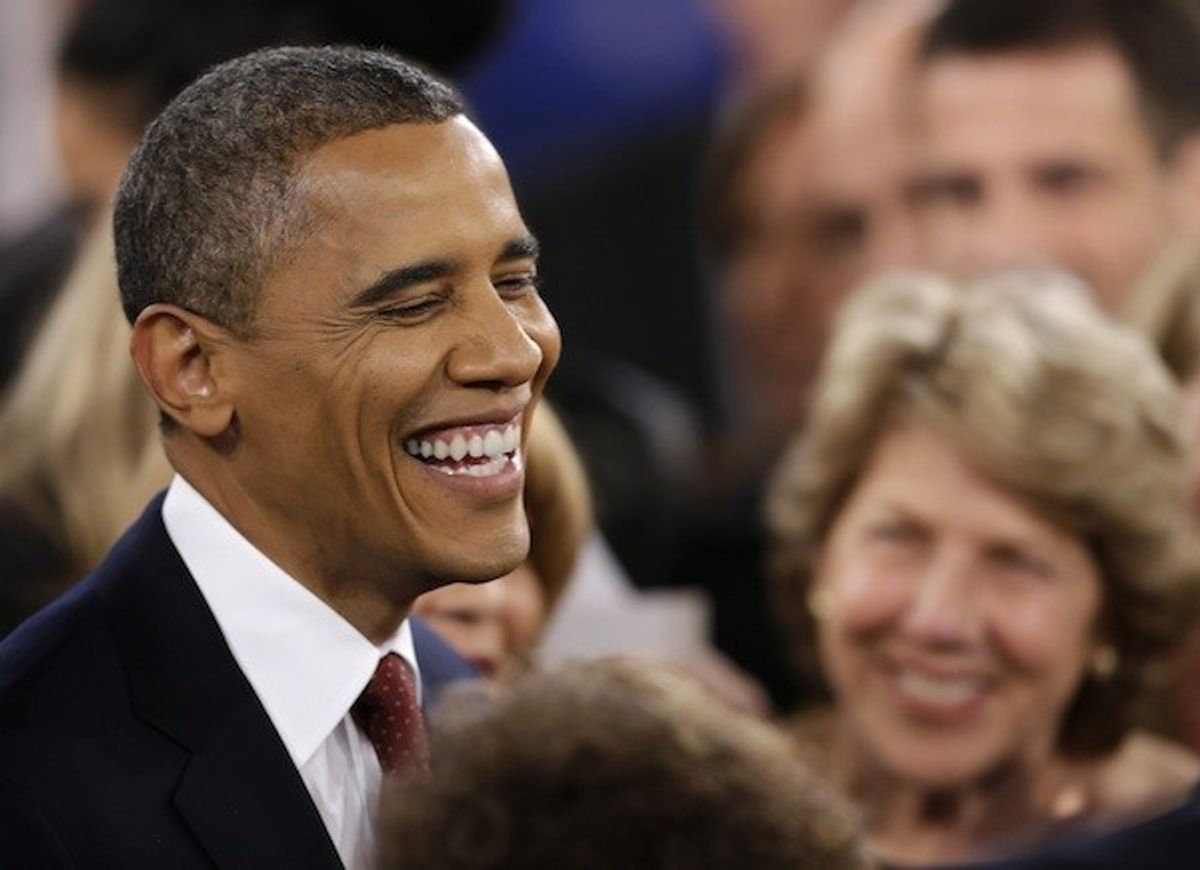 President Obama did what he needed to do tonight. He took the debate to Mitt Romney. He was relaxed, even jaunty, as he scored one point after another. He seemed to be enjoying himself at Romney’s expense. He looked more comfortable and commanding as the debate wore on, while Romney looked more stiff, edgy, and salesman-like.

Obama needed to remind voters that Romney is a very rich man out of touch with regular people, and he did that well. He got in Romney’s face and he got under his skin, but stopped just short of being overly aggressive.

You could tell right from the beginning that this was a very different Obama. When Romney touted his five-point plan to fix the economy, Obama responded scornfully, “Governor Romney doesn’t have a five-point plan, he has a one-point plan” and that plan is more tax breaks for the very rich who are allowed to play by different rules.

Obama was particularly effective at using Romney against Romney. He demolished the former Massachusetts governor's bogus arithmetic on the tax cuts, as Obama failed to do in the first debate and even a more aggressive Joe Biden did not quite do. And he used Romney’s support for more tax cuts for the very rich to remind the audience that with $20 million dollars of annual income, Romney pays a lower rate of taxes than they do.

Obama also got the tone just right—something midway between bemusement and indignation. There was not a shred of the less-attractive disdain and detachment that marked his first debate.

The town hall format helped, because it produced questions that were hard for the candidates and their handlers to anticipate. Most of Romney’s gaffes have been ad libs in response to spontaneous questions from voters. Obama is somewhat better off the cuff, as he clearly was tonight.

Romney helped the president out by making a few unforced errors. Obama was clearly vulnerable on the Benghazi attach. His initial response was not all that persuasive because it ducked the question of who screwed up by failing to honor the request for more security. But then Romney saved Obama’s bacon by alleging that the day after the attack, Obama was still calling it a protest in response to an offensive video.

It fell to moderator Candy Crowley to correct Romney, a too-rare factual intervention by a debate moderator, which knocked Romney totally off his game and diverted attention from the legitimate issue of why more security was not provided. Obama had also missed an opportunity to point out that it was the Republican House that cut the administration’s request for embassy security by $300 million, which could have settled the issue right then and there.

But Obama had few other missed opportunities, and he was at his best when ad-libbing. Another entirely unexpected question from the audience was directed at Romney, demanding what the differences were between him and former president George W. Bush. Romney did a halfway decent job at improvising answers. But then Obama deliciously pointed out that even George W. Bush did not try to turn Medicare into a voucher program, or to deal with immigrants by making their lives so miserable that they would "self-deport," or to defund Planned Parenthood.

Another unforced error that unintentionally revealed something of the true Romney came in response to a good question about discrimination against women. Romney plunged into a lame discussion about how, as governor, he had reached out to find qualified women, and had even allowed his assistant to get home in time to make dinner for her family. He sounded like a white male would-be liberal circa 1970. It got even worse when he argued that a stronger economy would open up more opportunities for women because employers would be looking hard for qualified workers even if they had to provide flexible working hours.

Romney’s unintended subtext seemed to be: If we can provide more jobs, employers will even be willing to hire women! He sounded patronizing, and way out of date.

Another good unscripted question came on the subject of the ban on assault weapons. Romney talked around the issue. Obama got off another good line when he pointed out that Romney was in favor of a ban on assault weapons before he was against it. Moderator Crowley helpfully added that such weapons had been banned before a Republican Congress repealed the ban.

Obama managed to show resolve and toughness, and to have a good time doing it. For someone who allegedly shrinks from confrontation, he landed one good punch after another.

It makes one wonder how he could have been so totally off his game in the first debate. I was very skeptical at first when some commentators suggested that he hadn’t gotten into Denver a day or two in advance of the first debate and might have been logy from the change in altitude. I recall flying into Denver for the 2008 convention and being very fatigued for a day.

Whatever the explanation, Obama has more than recouped.