Mitt's "binders full of women" not even true

Romney's "binders full of women" comment may have been funny, but it turns out to be bogus too 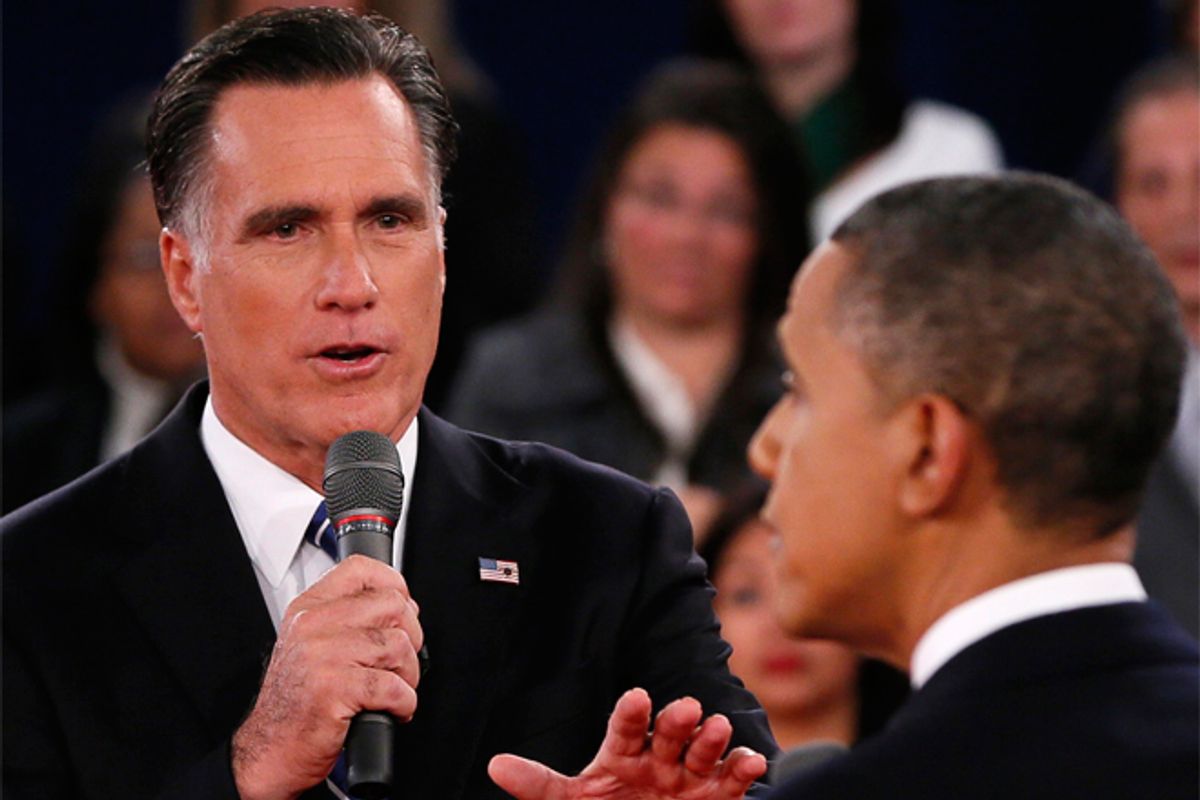 With three separate competing websites, a Facebook page that’s already received almost 250,000 likes, and a Twitter account that had attracted 13,000 followers before the debate ended, there’s no question that Mitt Romney’s comments about searching through “binders full of women” was the breakout viral star of last night’s presidential debate. But the comment is as revealing as it is funny.

The remark came in response to a question about what each man onstage would do for women, and Romney’s answer was essentially that he’s hired lots of women over his lifetime and has responded to their needs by providing things like a flex schedule so they could pick kids up at school. “We took a concerted effort to go out and find women who had backgrounds that could be qualified to become members of our cabinet. I went to a number of women’s groups and said, can you help us find folks? And I brought us whole binders full of -- of women,” Romney said.

But that story turns out to be not quite true, according to veteran Boston Phoenix journalist David Bernstein. As Bernstein pointed out last night, what actually happened is that a bipartisan coalition of women’s groups came together to compile lists of eligible female candidates for office before the 2002 gubernatorial election had even occurred. Romney says he “went to a number of women’s groups”  and asked them for the binders, but the opposite is true -- they went to him. Bernstein also notes that many of the senior-level women Romney hired were given control of departments and agencies that were not a priority for the governor, while there were almost zero women working on the budget or businesses development, areas that Romney cared more about.

Vice-presidential nominee Paul Ryan defended Romney's comments on "CBS This Morning," saying, “All he simply meant was that he went out of his way to try to recruit qualified women to serve in his administration when he was governor." That claim seems to be undercut by the fact that the groups came to Romney, instead of the other way around. Ryan added, "By the way, he has an exceptional record of hiring women in very prominent positions in his administration."

But that too may be a bit overly boastful. During Romney’s tenure in the governor’s mansion, the number of women in high-level positions actually declined by almost 30 percent, according to a 2007 study from the coalition of women’s group responsible for the binders effort.

Meanwhile, the Boston Globe noted last night that if Romney was really concerned about hiring women to senior positions, it seems to have started only when he entered public life. At Bain Capital, his private equity firm, Romney did not have any women partners during the 1980s and 1990s. Romney, the Globe added, “did not have a history of appointing women to high-level positions.”

UPDATE: And now straight from the horse's mouth. MassGAP, the women's coalition responsible for the effort to get more women appointed to state government, gives the Washington Post a statement saying Romney has it wrong -- they, and not Romney, initiated the process . The group also notes that female appointments actually fell off during Romney's tenure.