A bullying Romney blows it on Libya, while a feisty president nails him on taxes and the 47 percent 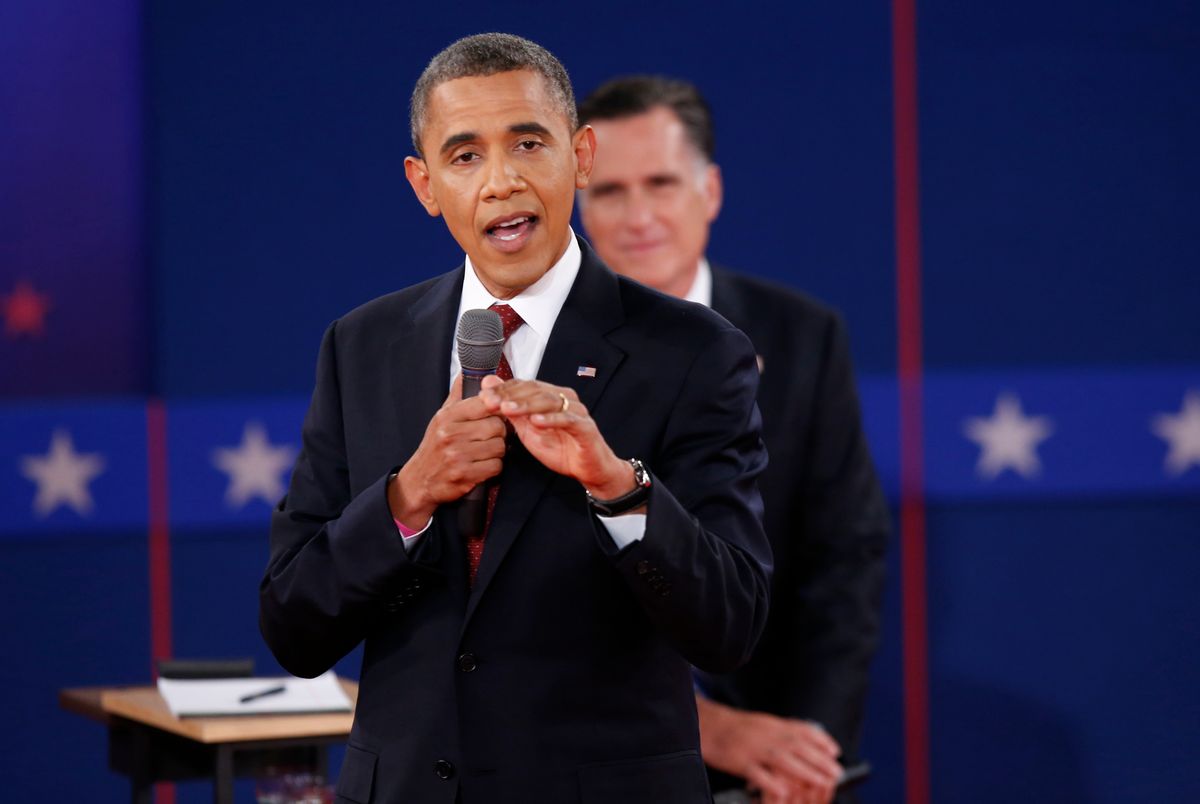 A bullying, belligerent Mitt Romney came into the Hofstra University debate thinking he was still facing the somnolent President Obama he met in Denver Oct. 3, and boy was he wrong.  Obama hit Romney hard on issues from contraception to taxes to Romney's 47 percent comments. He may have gotten off his best lines, full of cold fury, about what had been a looming problem for the administration: the attack on the Benghazi consulate.

The president won on style and substance. Romney stomped around the room and at least twice followed the president to his chair and tried to demand he answer a question. Moderator Candy Crowley was much tougher than Jim Lehrer but Romney ran over her anyway for a while, until she finally told Romney to sit down, and he skulked over to his chair. Crowley's finest moment, though, came when she corrected Romney and verified the fact that Obama did indeed call the Benghazi attack "an act of terror."

But Obama didn't need much help from Crowley. He came prepared to do his own fact checking and repeatedly shot at Romney, "That's not true," in various formulations just short of "You're lying." To Romney's claim that he had a "five-point plan" to turn around the economy, Obama replied, "Governor Romney doesn't have a five-point plan, he has a one-point plan, and it's that folks at the top play by a different set of rules."

He was combative on the question of Romney's dodgy tax plan, at one time mocking him: "If somebody came to you, Governor, with a plan that said, here, I want to spend $7 trillion or $8 trillion, and then we're going to pay for it, but we can't tell you until maybe after the election how we're going to do it, you wouldn't take such a sketchy deal and neither should you, the American people, because the math doesn't add up."

On a day when polls showed Romney almost tying the president among swing state women, Obama made a strong pitch for their support. He got a direct question on income inequality and got to tout his support for the Lilly Ledbetter Act, which Romney has never supported. He made his contraception coverage central to his appeal.

A major difference in this campaign is that Governor Romney feels comfortable having politicians in Washington decide the health care choices that women are making. I think that's a mistake. In my health care bill, I said insurance companies need to provide contraceptive coverage to everybody who is insured. Because this is not just a -- a health issue, it's an economic issue for women. It makes a difference. This is money out of that family's pocket. Governor Romney not only opposed it, he suggested that in fact employers should be able to make the decision as to whether or not a woman gets contraception through her insurance coverage. When Governor Romney says that we should eliminate funding for Planned Parenthood, there are millions of women all across the country, who rely on Planned Parenthood for, not just contraceptive care, they rely on it for mammograms, for cervical cancer screenings. That's a pocketbook issue for women and families all across the country.

Romney, by contrast, was condescending to women, in his treatment of Candy Crowley and even in answers designed to show he cared about women. My debate-watching colleagues howled when he boasted of having "binders full of women," and a comment about making sure one of his female employees had flexible work hours so she could get home to make dinner came off as patriarchal, not sensitive.

Likewise on immigration Obama was feisty and tough on Romney, noting that "during the Republican primary, he said, 'I will veto the DREAM Act,' that would allow these young people to have access. His main strategy during the Republican primary was to say, 'We're going to encourage self-deportation.' Making life so miserable on folks that they'll leave. He called the Arizona law a model for the nation. Part of the Arizona law said that law enforcement officers could stop folks because they suspected maybe they looked like they might be undocumented workers and check their papers. You know what? If my daughter or yours looks to somebody like they're not a citizen, I don't want -- I don't want to empower somebody like that."

I've never accepted the claim of Obama devotees that the president can't afford to show any anger lest he activate pernicious "angry black man" stereotypes. His dignified anger at Romney's Libya sleaziness was the finest Obama moment in a night full of them. But a close second was his final remarks in the debate, when he nailed Romney on his comments about the 47 percent:

I believe Governor Romney is a good man. Loves his family, cares about his faith. But I also believe that when he said behind closed doors that 47 percent of the country considered themselves victims who refuse personal responsibility, think about who he was talking about.

Folks on Social Security who've worked all their lives. Veterans who've sacrificed for this country. Students who are out there trying to hopefully advance their own dreams, but also this country's dreams. Soldiers who are overseas fighting for us right now. People who are working hard every day, paying payroll tax, gas taxes, but don't make enough income.

And I want to fight for them. That's what I've been doing for the last four years. Because if they succeed, I believe the country succeeds.