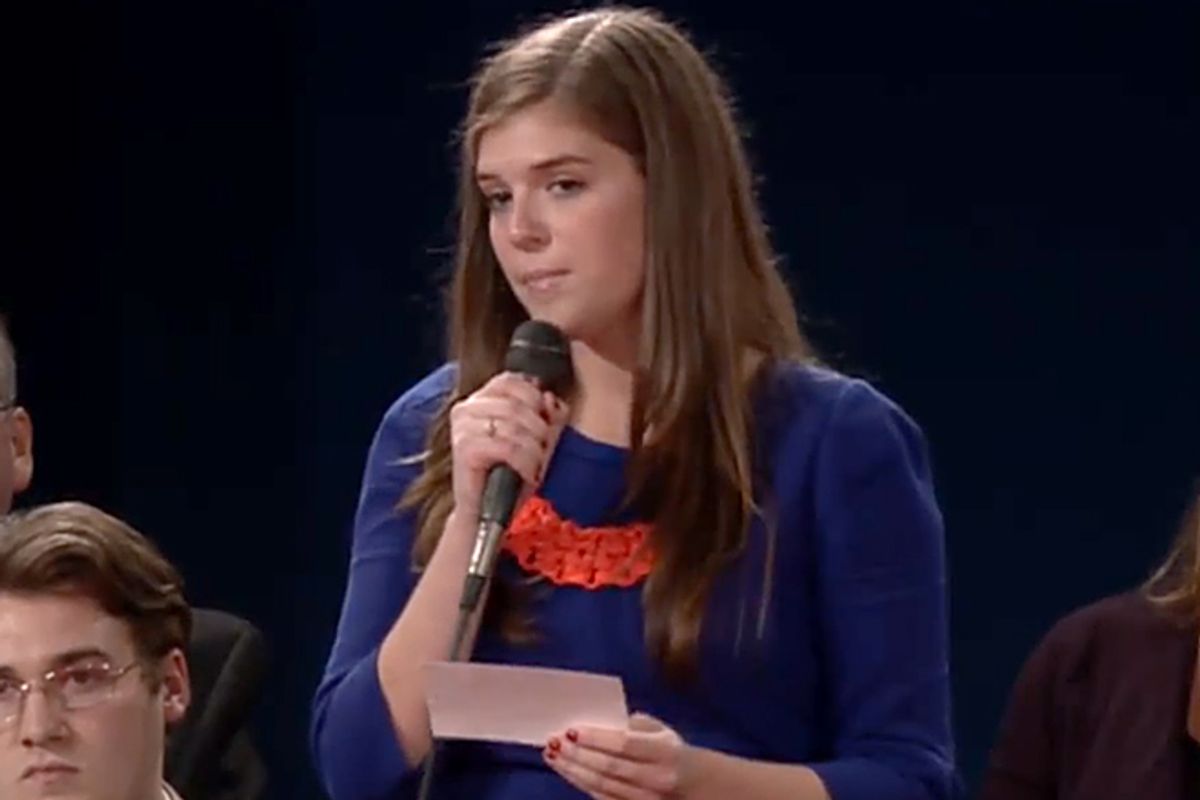 It took roughly 30 seconds after she asked about the wage gap last night for the right to start calling Katherine Fenton a left-wing conspiracy, vainly trying to connect her to someone who worked for Code Pink, calling her a "feminazi," and a "party girl." Reached by Salon at her home in Floral Park, N.Y., today, Fenton confirmed that she's no plant. She is, she says, a 24-year-old pre-K teacher and an undecided voter. Still undecided, in fact. And not a feminist.

Here's what Fenton asked last night: "In what new ways do you intend to rectify inequalities in the workplace? Specifically regarding females making only 72 percent of what their male counterparts earn."

So why is she undecided? Talking to Fenton today was an exercise in the frustrations and incoherences of such voters. She says she approves of Obama's health insurance reform, since it's allowed her to stay on her parents' insurance. "That's been really critical, especially for me," she said. "I've had some medical things that I've had to get tested and had to go to the doctor fairly often."

But she also says she's worried about the deficit: "$16 trillion in debt is a huge figure." And she's torn on the question of whether she's better off than four years ago. "While I'm feeling healthy and safe and comfortable, I can't really feel the same about our nation."  And she claims to be dissatisfied with the answer she got from both candidates: "I asked for new solutions, not what they've already done."

Despite asking a question that raised the hackles of the anti-feminist brigade, Fenton was vehement when I asked her if she's a feminist. "Absolutely not," she said. "I'm a 24-year-old woman that lives in the United States and feels like I should be treated the same as anyone else. That makes me a normal human being."

I asked her to clarify how she defined feminism, given that she'd told me she was passionate about "women's equality in the workforce" and had said, "I'm very protective of my reproductive rights." Fenton said, "I'm not only concerned with women."

Did she think that one candidate would be better for women? "That's hard to say," she said. "I can only speculate, but if I had to guess, gosh, my gut says President Obama. Based on the fact that he has said, I know he has two daughters so the cause is close to him. Governor Romney has granddaughters, that might help." She thought more. On the wage gap, she said vaguely, "I think people around the president making choices would be more more susceptible to action on that. I don't think Mitt Romney's people might be as concerned as they ought to be."