Around 70,000 protesters took to the street in anti-austerity demonstarions 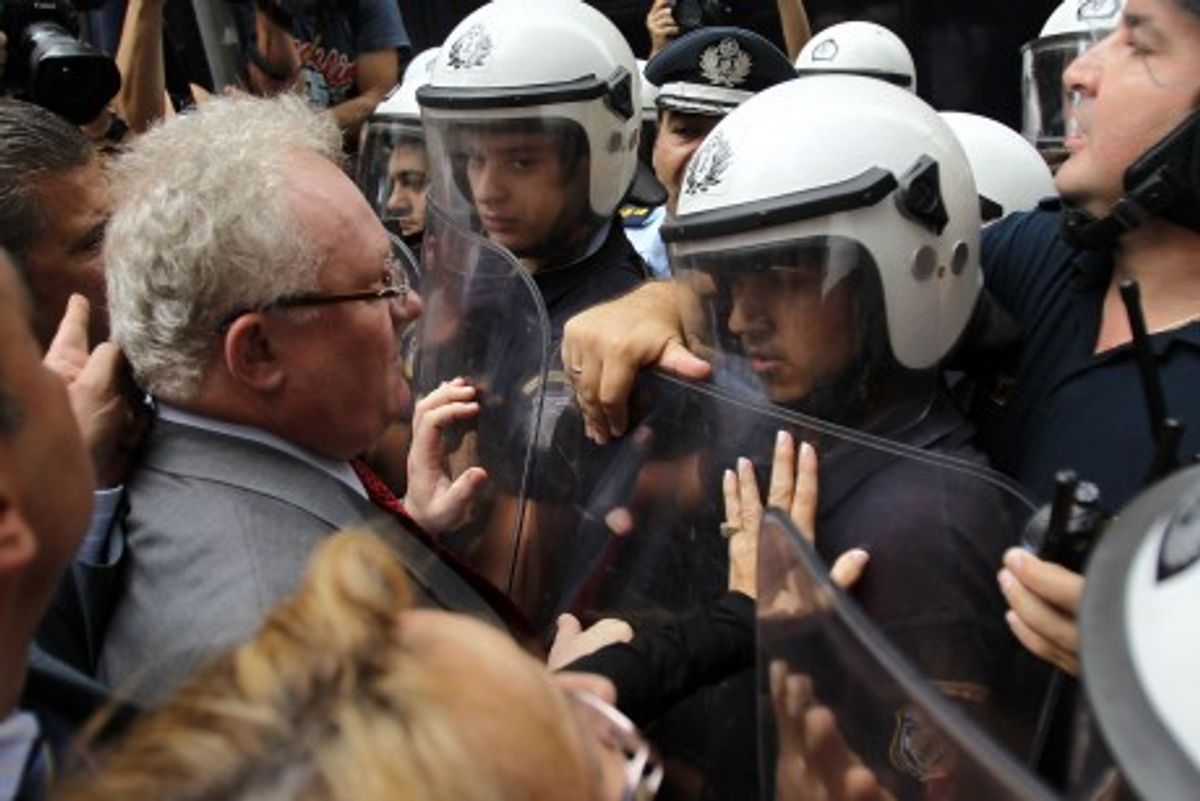 ATHENS, Greece –  Hundreds of youths pelted riot police with petrol bombs, bottles and chunks of marble Thursday as yet another Greek anti-austerity demonstration descended into violence, less than a month after more intense clashes broke out during a similar protest.

Authorities said around 70,000 protesters took to the street in two separate demonstrations in Athens during the country's second general strike in a month as workers across the country walked off the job to protest new austerity measures the government is negotiating with Greece's international creditors.

A 65-year-old protester suffered a fatal heart attack during the demonstration but efforts to revive him failed. The organizers of the protest march he participated in said the man had fallen ill before any rioting had broken out.

The measures for 2013-14, worth €13.5 billion ($17.7 billion), aim to prevent the country from going bankrupt and potentially having to leave the 17-nation eurozone.

Riot police responded with volleys of tear gas and stun grenades in the capital's Syntagma Square outside Parliament as protesters scattered during the clashes, which continued on and off for about an hour. Another general strike in late September had also seen limited, but much more intense, clashes between protesters and police.

Four demonstrators were injured after being hit by police, volunteer paramedics said. The Health Ministry said two of the protesters were treated in hospital and that their injuries were not serious.

Hundreds of police had been deployed in the Greek capital ahead of the demonstration, as such protests often turn violent. Police said about 50 people were detained Thursday.

A similar demonstration by about 17,000 people in the northern city of Thessaloniki ended peacefully.

Thursday's strike was timed to coincide with a European Union summit in Brussels later in the day, at which Greece's economic fate will likely feature large.

The strike grounded flights, shut down public services, closed schools, hospitals and shops and hampered public transport in the capital. Taxi drivers joined in for nine hours, while a three-hour work stoppage by air traffic controllers led to flight cancellations. Islands were left cut off as ferries stayed in ports.

Athens has seen hundreds of anti-austerity protests over the past three years, since Greece revealed it had been misreporting its public finance figures. With confidence ravaged and austerity demanded, the country has sunk into a deep economic recession that has many of the same hallmarks of the Great Depression of the 1930s.

"We are sinking in a swamp of recession and it's getting worse," said Dimitris Asimakopoulos, head of the GSEVEE small business and industry association. "180,000 businesses are on the brink and 70,000 of them are expected to close in the next few months."

Higher taxes expected to be levied in the new austerity program will destroy many of the struggling businesses that have managed to weather three years of the crisis so far, he said.

"In 2011, only 20 percent of businesses were profitable. So these new tax measures present small businesses with a choice: Dodge taxes or close your shop."

The country is surviving with the help of two massive international bailouts worth a total €240 billion ($315 billion). To secure them, it has committed to drastic spending cuts, tax hikes and reforms, all with the aim of getting the state coffers back under some sort of control.

But while significantly reducing the country's annual borrowing, the measures have made the recession worse. By the end of next year, the Greek economy is expected to be around a quarter of the size it was in 2008. And with one in four workers out of a job, Greece has, along with Spain, the highest unemployment rate in the 27-nation European Union.

The country's four-month-old coalition government is negotiating a new austerity package with debt inspectors from the EU, International Monetary Fund and European Central Bank. The idea is to save €11 billion ($14.4 billion) in spending — largely on pensions and health care — and raise an extra €2.5 billion ($3.3 billion) through taxes.

After more than a month and a half of arguing, a deal seems close. On Wednesday, representatives from the EU, International Monetary Fund and European Central Bank, said there was agreement on "most of the core measures needed to restore the momentum of reform" and that the rest of the issues should be resolved in coming days.

Greece is also seeking a two-year extension to its economic recovery program, due to end in 2014. Without the extension, it would need to take €18 billion worth of measures instead of the €13.5 it is currently negotiating.

Athens hopes to get the next loan installment around mid-November. Prime Minister Antonis Samaras has said the country will run out of cash by the end of that month, meaning Greece would most likely have to default on its debt and potentially end its membership of the euro currency.

Costas Kantouris in Thessaloniki, and Elena Becatoros and Nicholas Paphitis in Athens contributed.