When we all shaved our heads

After a lice crisis hit our family, I learned how miserable those suckers are -- and how strong my marriage is 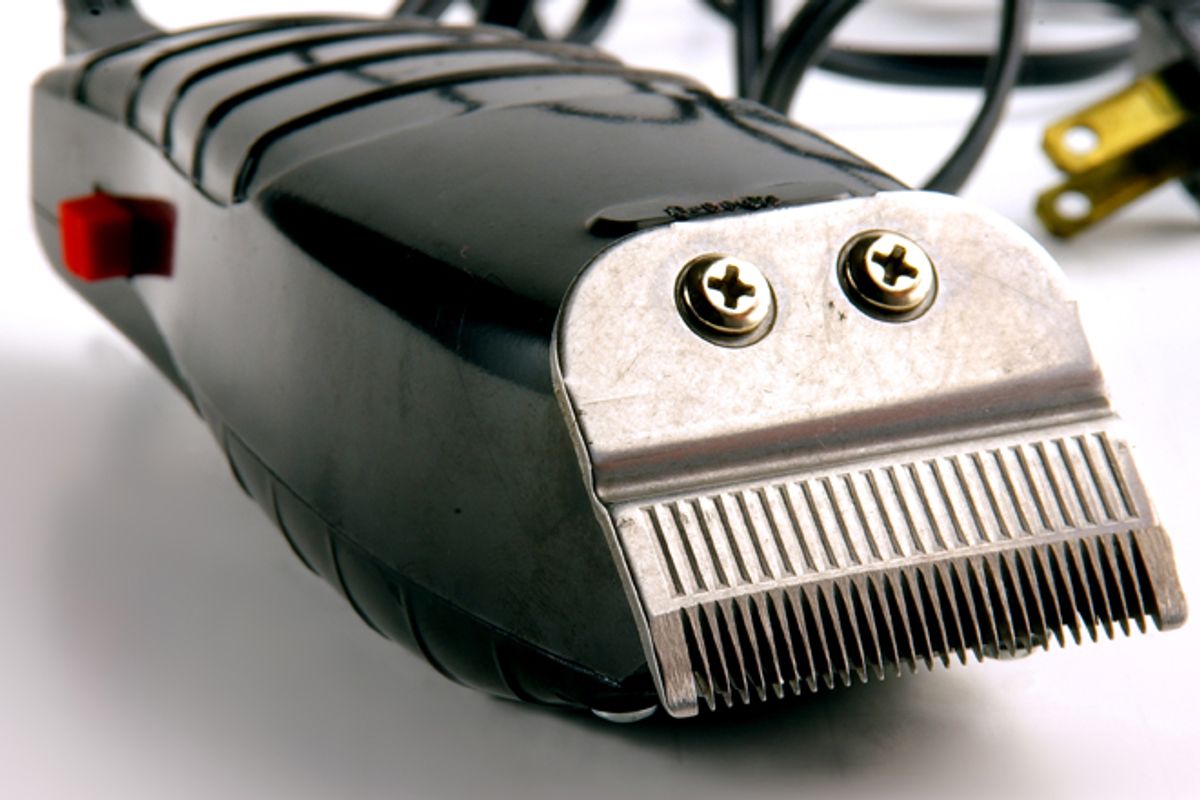 “I don’t want to buzz your hair,” my husband protested. “That’s too much responsibility. What if I do a bad job?” An hour before, I’d taken a comb to my head and pulled out a live louse. Beauty was not my endgame.

Six weeks earlier, I’d looked on as my husband buzzed our youngest boy’s hair. It was my husband’s first foray with the clippers, and he’d proved his mettle. For the 9-year-old to lose his long, blondish, constantly-matted-with-tangles locks was tough. He’d never cut his hair. He protested each of his extremely infrequent trims. The hair that blanketed his back helped define his identity. But because he’d been completely infested with the little buggers, he’d succumbed — not by choice — to the buzz cut. That extreme haircut was the only way he’d be admitted to a beloved two-week overnight camp.

We’d spent days trying to outwait the boy, in hopes he’d conclude that life trumps hair and summer camp trumps moping. Our efforts included pleading, cajoling, validating and gentle ribbing — to no avail. Eventually, I walked away from the house with one of those hard-parenting-day knots in my stomach. I called my husband from a half-block away. “There is no other choice than to force this haircut,” I said. He agreed. So the afternoon we broke the hard news, we did so as a united front —two on one, a rarity with four children. Together, we held our sobbing boy. More than once that afternoon, our eyes met, casting glances that said things like can you believe we’re struggling with a 9-year-old boy over an epic haircut — how did we get here?

Almost 22 years ago, my husband and I went out to dinner. After dinner, he came over to my house for tea — and never left. During those pre-kid years, we didn’t fight; sulked sometimes, sure. We spent 18 months in London just after we got married and returned to small town New England just three months before the baby arrived. That baby is 17.

The newborn stirred things up. There was the milk crisis of 1995 and 1996, when I had to pump eight times a day to keep the supply up in order to breast-feed our tiny boy. Strap a new mother to a bovine contraption for about three hours each day, take away everyone’s sleep and heap the responsibility for a perfectly gorgeous, utterly helpless tiny person into the mix and you get a married couple ready to rumble.

There was the day my husband spilled the (pumped) milk. There was my near undoing during the 10 days he went on a business trip. There was the fact that I refused to leave the baby long enough to recoup any sleep, even when we engineered an elaborate plan for me to retreat to a friend’s empty house for one uninterrupted night of sleep, which was nearly as precious as the pumped breast milk. I yelled. He yelled back. Two friends visiting at that moment put a Post-it note on an empty drinking glass that read Therapy Fund and placed two $1 bills inside. I told my mother about it from a friend’s quiet house, where I finally landed, with my pump and my pillow. She said, “You should probably put a dollar in each time you don’t fight.”

The afternoon the lice were discovered, my husband was away. The boy sobbed; the eldest son freaked and I drove to the pharmacy. En route, I called my husband to break the news. “That’s awful,” he said. I raced from pharmacy to preschool to our driveway-turned-pop-up-salon. Our housemates and I went into overdrive: haircuts and nit combs and laundry and quarantine for the stuffed animals and extraneous bedding. The washer and dryer — on high — ran continuously. By the time my husband returned late the following evening, my nerves were frayed and I was exhausted.

So, when he chided me about making the eldest son, the one who hates all insects, paranoid, I snapped. “You didn’t hear how far I’ve talked him down. You weren’t here. You don’t know what this is like,” I told him. “You don’t get to criticize.”

He knew to back down, regardless of what he thought just then. As he combed — and combed, and combed — he began to comprehend the situation’s relentlessness, and we settled in together. We’ve put many figurative dollars into the Therapy Fund glass — for fights we’ve had and ones we’ve avoided. We don’t row crew, but I imagine us with that kind of grace when we’re clicking. Each time our oars move in consort I’m surprised by how affirmed I am, how our love itself feels at once sleeker and more worn in, in a good way, like leather or sea glass or jeans.

Post-buzz cut, the boy went to summer camp, where he enjoyed two of his best weeks ever.

The trust between my husband and me is especially dear when things get rough, or even scary. When your hair is being buzzed, the clippers make a humming sound, kind of like a lawnmower but right against your ears. You might think the sound would conjure other insects, say a mosquito or a bee, but this isn’t the case. It turns out that you must place immense faith in the person wielding them, not for beauty’s sake but for safety’s. It’s as if you hear the sharpness. The person holding the danger is the one protecting you.

Although my hair barely reached my shoulders, when it began to tumble around me — my husband employed scissors first, and then clippers — there was an astonishing amount of it. I’ve always had thick, dark hair, even as a baby. Like my mother’s hair, my gray filtered in earlier than for most people. For much of my life it was also quite long. After three pregnancies and the journey into middle age, it was officially silver and dark, not just dark, and not so thick.

My husband is an antiquarian book dealer with a definite bent to perfectionism about particular but random tasks. He wears his hair, diminishing over time, cropped. “You really got the hair gene,” he remarked every minute or so, when he had to pull the clipper case apart and take out clumps of hair. Although I could not see his fingers in action, I felt their daintiness, the way he willed them toward a kind of precision mine do not possess the ability to perform. To see him fold laundry — Gap stores’ neat — or load the dishwasher or handle a letterpress or an antique tome’s crinkly, opaque pages is to appreciate his relationship to his soft hands, ones that do not wield large tools or lift heavy things outdoors. During the summer’s lice crisis, the tasks surrounding eradication of the bugs had naturally been divvied between us not by gender stereotype but by precision versus constant industry: he combed and I did mountains upon mountains of laundry.

During my buzz cut, the formerly long-haired camper son was already fast asleep. “Won’t our buzz-cut boy be surprised in the morning?” I asked my husband.

“That he will,” he replied. We both remembered my offer to the boy that difficult afternoon — to buzz my head in solidarity. He’d refused, as if I’d made the world’s most stupid suggestion. “Why would you wreck your hair for no reason?” he’d asked. “I like looking at your hair.”

Most of the time, my husband and I are in some responsive mode — not always as immediate as a lice crisis, not always with the kids — and so we don’t step back often to appreciate the extent of our partnership. I felt it so keenly, though, as the clippers whirred and he buzzed my hair and the assault on the lice ensued, that partnership, that love.

“You have a cute head,” he said, as my hair disappeared in a pile around me.

Sarah Buttenwieser’s work has been published by the New York Times’ Motherlode blog, Brain Child Magazine, Huffington Post and many others. Her blog is Standing in the Shadows. Follow her on Twitter, @standshadows.