Why most celebs are for Obama

It's no secret that popular culture is dominated by liberals. The reasons why might surprise you 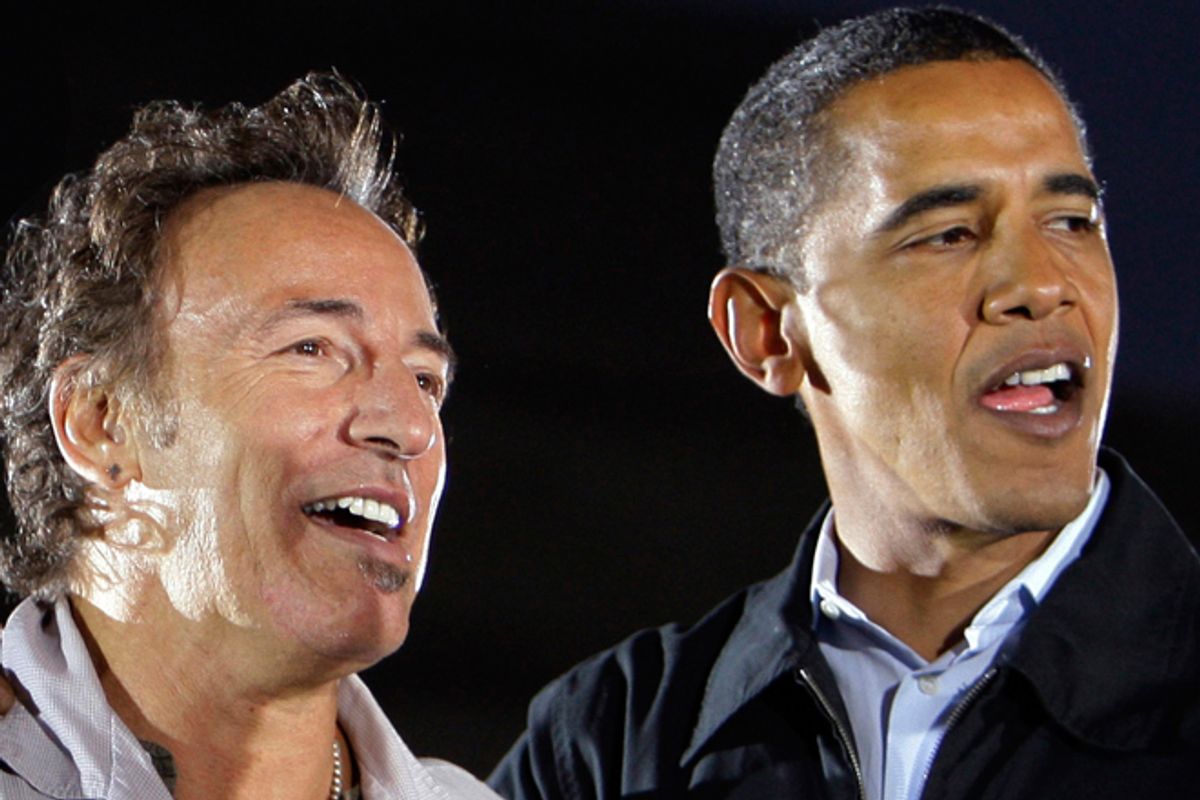 This week, Bruce Springsteen became the latest celebrity to publicly support the president's reelection campaign, following, most recently, Scarlett Johansson, Eva Longoria and Kerry Washington, who appeared in a pro-Obama video by MoveOn.org.

In general, the list of celebrities contributing to, stumping for and endorsing President Obama is far too long for this column. But a week ago, when a little-known actress named Stacey Dash (who, ahem, is black) announced her support for Mitt Romney, conservatives went nuts. According to Glenn Beck’s the Blaze website, “Twitter exploded” with the news. Or at least his feed did. But the point is, just as Republicans were so excited to nab Clint Eastwood that they let him ramble unscripted to an empty chair for 10 minutes, Romney backers were so excited to have a black actress endorse Romney that it didn’t seem to matter no one had ever heard of her.

Andrew Breitbart was, in this regard, always correct: Hollywood is liberal. Celebrities are so omnipresent in national Democratic politics that it’s almost not surprising or even exciting anymore to encounter them (shameless sidebar: a picture of me and Eva Longoria in which I am trying to not look excited). But Hollywood does not lean Democratic because the warmer weather in California breeds open-mindedness or because of some master ideological plot. Popular culture is overwhelmingly liberal because Americans overwhelmingly favor liberal popular culture.

In the 2010-2011 television season, the top-rated sitcom was "Modern Family" — a show that, among other socially liberal leanings, features a gay male couple raising a daughter together.  The third most popular sitcom is "Glee," which includes both a prominent gay male couple and lesbian/bisexual couple as well — and this season, a transgender character to boot. And incidentally, the popular sitcom in the middle there is "Big Bang Theory," which, among other things, features two physicists as main characters, suggesting that science is actually a real thing.

The top grossing film of 2011 was the finale of the Harry Potter series, which some religious extremists have boycotted because the series endorses “the occult” and homosexuality. But, notwithstanding, the film broke box office records for its opening weekend to become the third-highest-grossing film of all time. Presumably, it wasn’t just Democrats flocking to theaters.

The strong and consistent popularity of liberalism as reflected in Hollywood films, television shows and musical acts is evidence of the general public’s inclination toward social liberalism, that the arc of justice may be long but it bends toward at least begrudgingly accepting or even embracing gay headmasters of wizard schools.

Recently, the creator of the sleeper hit TV show “Friday Night Lights” chastised Mitt Romney for using the show’s signature catch phrase “Clear eyes, full hearts, can’t lose!” as part of the Romney campaign shtick.  Romney is apparently a big fan of the show, despite the single parent families and abortions and all.  But Peter Berg, the “Friday Night Lights” creator, wrote to Romney, “Your politics and campaign are clearly not aligned with the themes we portrayed in our series.”  It begs the question of why Mitt Romney would enjoy a show that does indeed feature if not celebrate so many of the things he has opposed in his public life.  One might say this makes Mitt Romney a hypocrite.  I think it just makes him a Republican.

If Republicans don’t like that Democrats have more star power and Hollywood money behind their campaigns, then Republicans should stop watching liberal TV shows and movies and stop buying Bruce Springsteen’s commie albums.  And maybe buy Lee Greenwood albums instead.  The 69-year-old country singer is the musical accompaniment for the Romney campaign this week.  Greenwood, who has been married four times and once worked as a blackjack dealer, last had a number one song in 1986.