For white chicks in afro wigs

A blogger takes flak for her silly race experiment, but I'm reminded of the complicated power of black women's hair 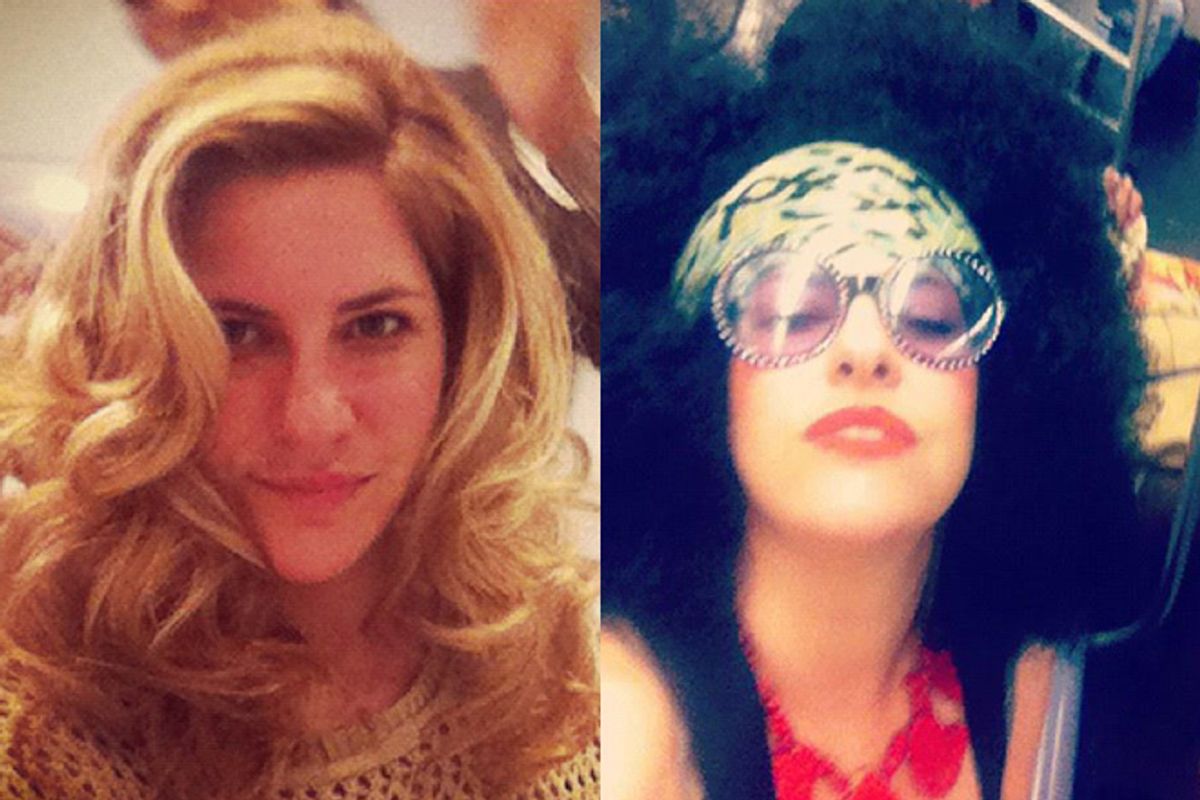 So there’s this crazy white chick running around New York wearing an Afro wig to tweak her perspective and experience life differently. She writes about this twisted Black Like Me-Watermelon Woman stunt on her blog Before and Afro (get it?). And she’s getting flak from people of all colors who think at best she’s insensitive, at worst racist and perhaps mentally unhinged and in need of medication.

The negative chatter kicked up last week when the blogger, Michelle Joni, attended a fried chicken festival and blogged that it was “obviously an occasion to wear the fro.”

“You are a walking cliché,” reads one of the comments on her site. “A white person that believes Black culture, heritage, and natural BEING is something to poke fun at, to have fun with, to experiment with, and to belittle. Because that is exactly what you’re doing, whether you mean to or not.

Here’s another: “From one white girl to another – please just stop. You are hurting people. You are wearing their identity and culture as a costume that you can put on and take off.”

So maybe you’re thinking that I’m going to do more of the same -- go off on her, all Angry Black Woman. You want to see me snatch that wig off her ig’nant head and give her a good beat down. You’d pay to watch me force-feed her chitlins and collard greens and ham hocks until she apologizes to all black people — plus our ancestors and unborn children. You think I need to lock her in a room and make her read “The Bluest Eye,” “I Know Why the Caged Bird Sings” and “Aint I a Woman” — and then watch “The Autobiography of Miss Jane Pittman” followed by “The Help.”

Trust, this fakey-dake sistagirl is totally annoying. No thoughtful person is naive enough to think it’s OK for a white woman to parade around in a big black afro wig, then slip it off when the mood has shifted. Not in this country. Her blog hits one last nerve, because it’s not just about hair; it’s about being a black woman in Amerikka and all the hurt and pain behind it.

Black women have been enslaved, raped, denied opportunities, disrespected, misrepresented and blamed. A strong black queen can turn into “ugly black bitch” quicker than a finger snap or a catcall on the street. All the racism and sexism becomes internalized — our inner Pam Grier may try her best to drop-kick the ancient insults and present-day slights, but she doesn't always succeed.  So understand why we may feel touchy about our images, our bodies, our hair.

But I’m not going to go off on her. Because I know a little somethin-somethin about race, hair and complicated feelings.

I came of age in an all-white suburb of Denver during the late '70s -- smack in the middle of the Black Power movement. When you are trying to prove that you’re really baaaaad — not some talking-white sellout who lives in the burbs — what do you do? Grow a full-blown, Angela Davis-style ‘fro. Look at me in that photo — I’m fierce, right? I was a bad mama-jama because of all that hair. My hair gave me the authenticity I thought I lacked. Black power. Black cred. Crowning glory indeed.

So here's what I think: A head full of afro does make you feel fierce and powerful and bad-ass, and anyone, black, white and in between is entitled to savor the feeling — Michelle Joni, the Afro gal included.

Am I the only one who remembers the laugh-until-you-pee Hairpiece sketch from George C. Wolfe’s brilliant 1986 stage play “The Colored Museum”? As the late Danitra Vance tries to decide which wig to wear to break up with her boyfriend — the afro or the bouncy flip — the two mean-girl wig-heads on her dresser come alive and get into a knock-down drag-out about which style is better. I vote for the ‘fro.

So what about the Before and Afro girl: hair admiration or race mockery?

Relax: It’s only hair — and, in her case, synthetic. We black people are too obsessed with it and need to dial it down. Think back to all that drama around Gaby Douglas’ hair at the Olympics last summer. We treated her like she had betrayed the race — not won the all-around gold — just because every hair wasn’t glued in place. Whose hair stays perfect during an athletic competition, people?!!!!

And poor Oprah: Last month when she went au naturel on the cover of her mag, haters accused her of hair fraud. They didn't believe that her natural hair was actually natural.

So, yes, the afro is iconic, but why are we so protective of it when most of us have left it behind? Statistics show that the majority of black women straighten their hair. Think about the most visible members of the celebrity industrial complex: From Michelle Obama to Queen Latifah, we have no idea what their natural hair looks like.

And many, like Beyonce, Mary J. Blige and Nicki Minaj are straight and blond. I’m not judging, by the way; my own hair is five shades lighter thanks to L’Oreal Healthy Look #10.

Hair doesn’t define you, me or Before and Afro girl. As India.Arie sings, “I Am Not My Hair.”  The most confident, strong women I know think of hair as a statement — fashion, not political. They go from fried-dyed-laid to the side one week to twists or braids the next. Diana Ross today, Twiggy tomorrow. At one place I worked, our super-cool black female office manager kept heads spinning with her constantly changing sleight of hair. One confused white male co-worker pulled me aside and asked how she did it. (Weaves and wigs, dude. Keep up!)

That’s basically what Before and Afro girl is doing — using hair as an accessory, though not in the most elegant way. So, yes, she would be smart to stay away from the fried chicken references and catch a revival of “For Colored Girls” if she wants to pose as one.

But let’s not pull our hair out over this wannabe, and also not give her any more attention. I say go on with your bad self, but I won't be looking.

Linda Villarosa runs the journalism program at The City College of New York and attends the CUNY Graduate School of Journalism. She is the author of the novel “Passing for Black” and other books. Her website is lindavillarosa.com. Follow her on Twitter @lindavillarosa.