How big money took over our politics 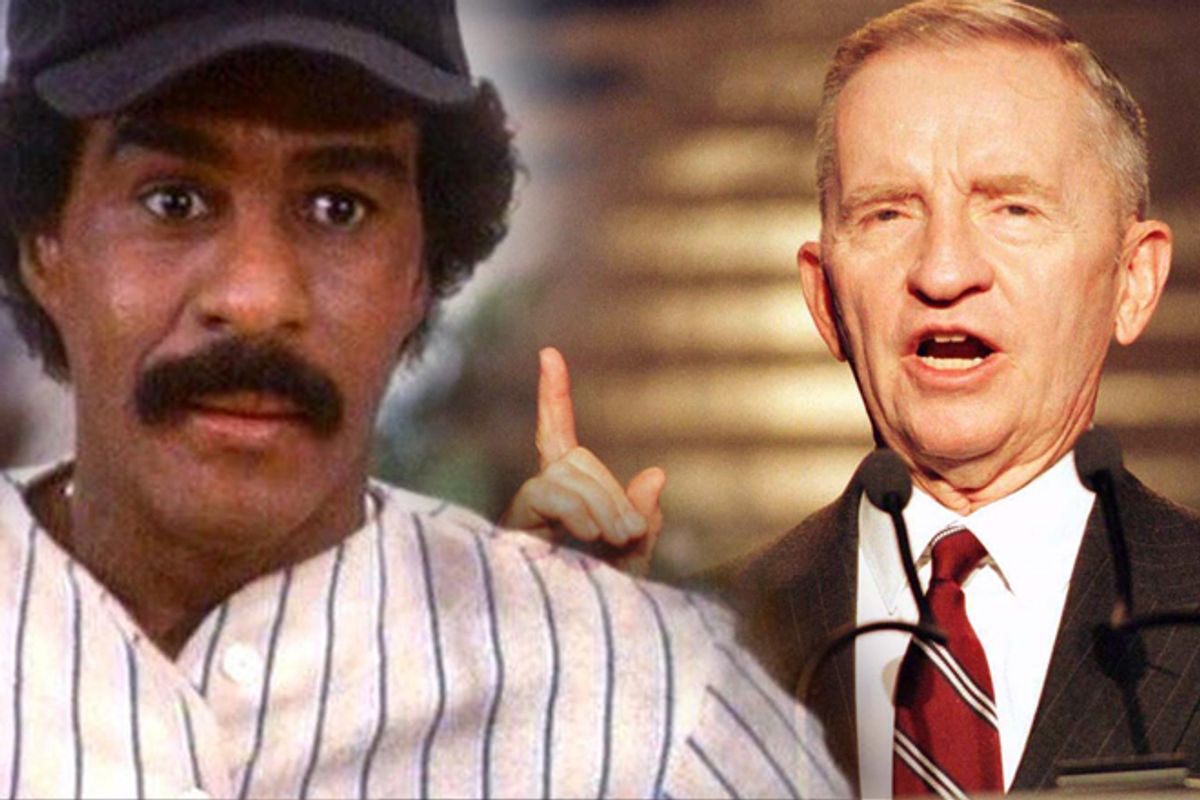 The two names that best explain money's unprecedented political influence in America are not Barack Obama and Mitt Romney, but Montgomery Brewster and Ross Perot. The former duo, who will each raise nearly $1 billion for their presidential campaigns, are mere symbols of the problem. The latter, by contrast, tell us how huge the problem now is and how quickly it has grown.

Let's start with Brewster, the fictional character played by Richard Pryor in 1985's satirical film "Brewster's Millions." An adaptation of a Gilded Age book of the same name, the movie is about Brewster accepting a relative's challenge to try to spend $30 million in 30 days without accruing any assets. This feat is portrayed as hilariously difficult, even with the protagonist figuring out that he can waste lots of money by running a "vote none of the above" campaign.

Today, Montgomery Brewster is more than just a fixture of cable's vast wasteland of '80s reruns. When he periodically appears on our televisions, he proves how crazy this era's politics have become. Whereas spending $30 million in 1985 -- or about $64 million current dollars -- in a month was once considered impossible and thus a narrative for Hollywood humor, the two real-life presidential candidates will each spend roughly three times that amount in the last 30 days of the ultra-serious 2012 election. Put another way, if Montgomery Brewster were today a presidential candidate, his $64 million would still be a comedic punch line. Only the laugh wouldn't be about his profligacy, it would be about how poorly financed a candidate he is.

Then there is Perot, the businessman who, in 1992, mounted one of history's most electorally successful independent presidential candidacies. During his campaign, he spent $63 million. For that, he has been routinely ridiculed as a poster boy of excess. But, then, Perot spent the inflation-adjusted equivalent of roughly $100 million in today's dollars -- or a little more than half of what Obama and Romney each raised in just the last month. Like Brewster, if Perot ran for president today on that budget, he'd be lambasted by pundits and politicos not for spending too much but for spending too little.

The breathtaking speed of this political transformation reflects the larger one-percent-ization of our economy. Since the heyday of Brewster and Perot, the rich got so much richer than the rest of us, and they are therefore better positioned to dominate politics with their checkbooks. Indeed, as campaign finance records show, this year's stunning influx of cash isn't coming primarily from small donors interested in democratic engagement -- it is coming from the fat cats.

These are donors -- or, better yet, sponsors -- who don't altruistically give money but who instead shrewdly invest it, in this case in candidates from whom they expect a return. And whether that return comes in the form of pre-election speeches promoting special-interest policies or post-election bills that provide windfalls to politically connected industries, the corrupt campaign finance system forcing candidates to rely on these sponsors means the investments almost always pay off.

This influence-buying explains why, for all the attempts to stress supposed differences, the two presidential candidates essentially agree on the major economic issues their Big Money financiers care about, from Social Security cuts (for them) to free trade deals (more of them) to regulations (less of them) to corporate tax rates (lower them). As much as voters might want a choice on these issues, there is none to be had. It is a painful reminder that until we start financing campaigns with public money unattached to private interests, us non-fat-cats will never have such a choice -- no matter how much the election-year agitprop pretends otherwise.