Mass exodus in store for Cuba?

It's removed its crushing travel restrictions, but don't expect foreign embassies to start handing out visas 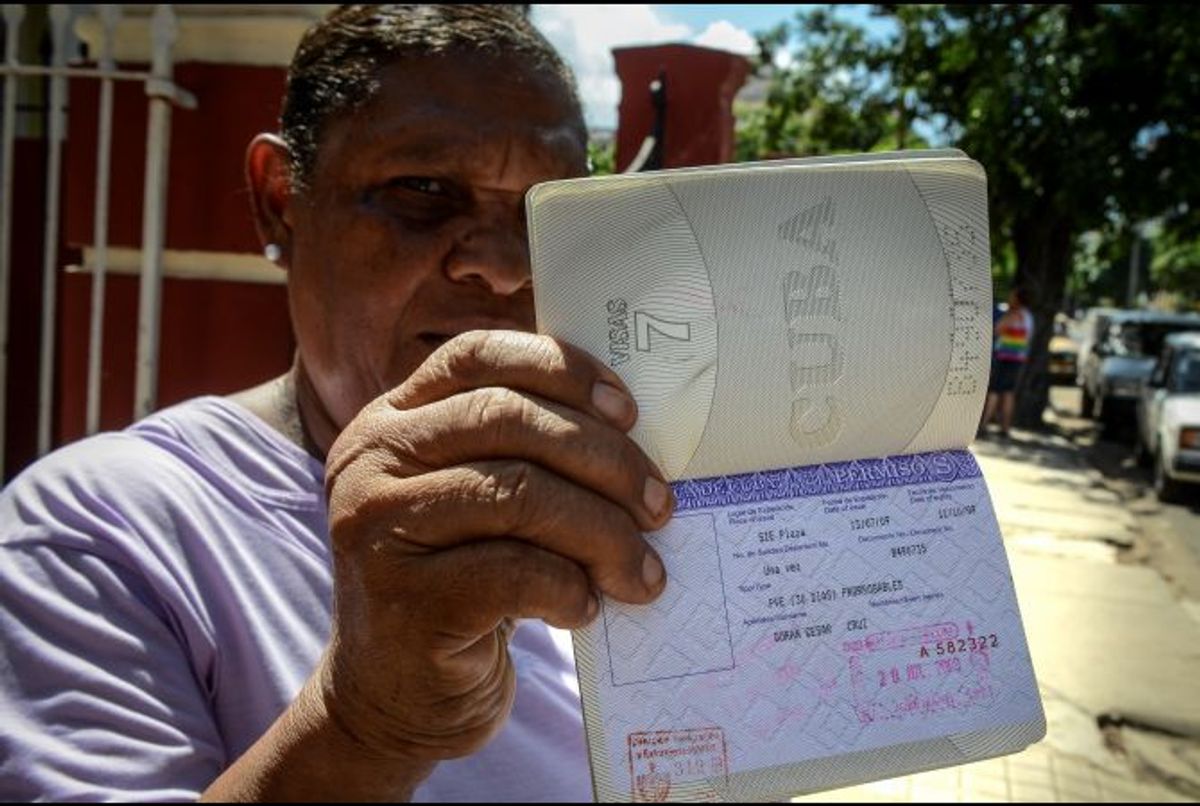 HAVANA, Cuba — The predictions of a mass exodus began soon after the Cuban government announced this week it was moving to scrap the odious travel restrictions that have micromanaged the comings and goings of Cubans for more than 50 years.

Since islanders won’t need an “exit permit” to travel anymore — just a passport — many expect a flood of visa applications at foreign embassies once the new policy takes effect Jan. 14.

Maybe so. But probably not.

The reality is that for years the vast majority of Cubans who wanted to travel — and could afford to — were not denied the exit permit to leave the country. More than 30,000 a year emigrate from the island, mostly to the United States. They include the more than 7,000 who arrive illegally, typically across the US-Mexican border or by boat. Any Cuban who reaches US territory is eligible for US residency under the 1966 Cuban Adjustment Act.

Still, the process of obtaining travel permission was onerous and expensive, with an exit permit costing the equivalent of $170 — more than eight times the average monthly state salary. And there's no guarantee that the permit would ultimately be granted by immigration authorities. The exit visa requirement became a hated symbol of the communist government’s Kafkaesque bureaucracy and Orwellian controls on personal freedom.

The difficulty of leaving the island became an incentive to stay away, even as Cuba’s state-run economy became more and more dependent on the hard currency sent back by the approximately 1.5 million islanders living abroad.

President Raul Castro may also see the move as a way to trim the number of employees on bloated state payrolls over the next few years, with the government planning to eliminate hundreds of thousands of superfluous workers.

Authorities in Havana say their new measures are designed to facilitate the ability of ordinary Cubans to come and go, and to normalize the relationship between Cuban emigres and their homeland. It’s a change that will especially favor Cubans who might want to work abroad but continue to live part of the year at home, taking advantage of the island’s low cost of living, free health care and other services.

In that regard, the move paves the way for Cuba to increasingly resemble other Latin American and Caribbean economies that rely upon the cash sent home by a large expatriate workforce.

“These measures are truly substantial and profound,” said Col. Lamberto Fraga, Cuba’s second-highest-ranking immigration official, in a press conference following the announcement. “What we are doing is not just cosmetic,” he said.

US State Department spokeswoman Victoria Nuland said Washington welcomed the news, and was "analyzing the details" to see how it might affect the way Cuban visas are processed.

The move to restore travel rights is part of the 81-year-old Castro’s broader reform agenda eliminating some of the restrictions on individual freedoms that fostered deep resentment here, especially among younger Cubans.

In the past several years, Castro has ended prohibitions for Cubans to own cell phones, stay in tourist hotels, open small businesses and buy and sell their homes or used cars.

Castro opponents and Cuban dissidents remained skeptical of the moves, but they have generated palpable enthusiasm and praise on the streets of Havana.

“The government is taking positive steps to give back our freedoms,” said Roberto Perez, who was applying for a passport outside an immigration office in Havana. “We’ve been captives in our own country for too long.”

The number of Cubans who will try to leave the island is almost certain to rise, but the increase may not be as dramatic as many forecast.

For starters, it’s unlikely that foreign embassies and consulates in Havana will begin eagerly handing out visas, particularly to Cubans who lack professional skills or don’t have relatives abroad who can support them financially once they arrive.

Cuba has long justified its travel restrictions on US laws that grant residency to any islander who sets foot on US soil. The restrictions were first imposed in 1961 when many of the country’s best-educated professionals fled Fidel Castro’s Revolution and took their skills and smarts to Miami.

The new immigration rules still contain measures designed to stop Cuba’s top talent from seeking higher salaries elsewhere. An editorial in the Communist Party newspaper, Granma, says the control mechanisms will stay in place if US policies continue to entice doctors and others to defect.

“As long as the policies continue to encourage a ‘brain drain’ to deprive us of essential human resources for the economic, social and scientific development of the country, Cuba will be obligated to take measures to defend itself,” the editorial said.

Col. Fraga, the immigration official, said the new rules aren’t a blanket ban on personal travel for those workers — including doctors, professional athletes, scientists and government officials with access to sensitive information. “It’s not that they won’t be able to leave, only that they will require authorization,” he said.

As with many of the other changes that Cuba has made in recent years, authorities left themselves considerable room to maneuver should their reforms produce unintended outcomes.

The new immigration laws appear to give authorities broad discretion as to the definition of an “essential” worker, for example. In government ministries, supervisors are being asked to draft a list of workers who will continue to need special authorization to travel.

In making such exceptions, however, the government is taking a long-term risk that it will discourage an entire generation of young Cubans from pursuing professional degrees in strategic fields, knowing that those careers will carry limits on their personal freedoms.

And few expect the government to cease using travel rights as a way to punish Cuban dissidents. The new policy says any Cuban can be denied a passport “when it is in the public interest, as determined by the appointed authorities.”

Still, at its core, the reform measure is a bet that if Cubans are given greater freedom to come and go, more will choose to leave but more will also choose to return.