Romney stumbled on Libya because the GOP is reliant on a right-wing media machine that has no ideas, just scandals 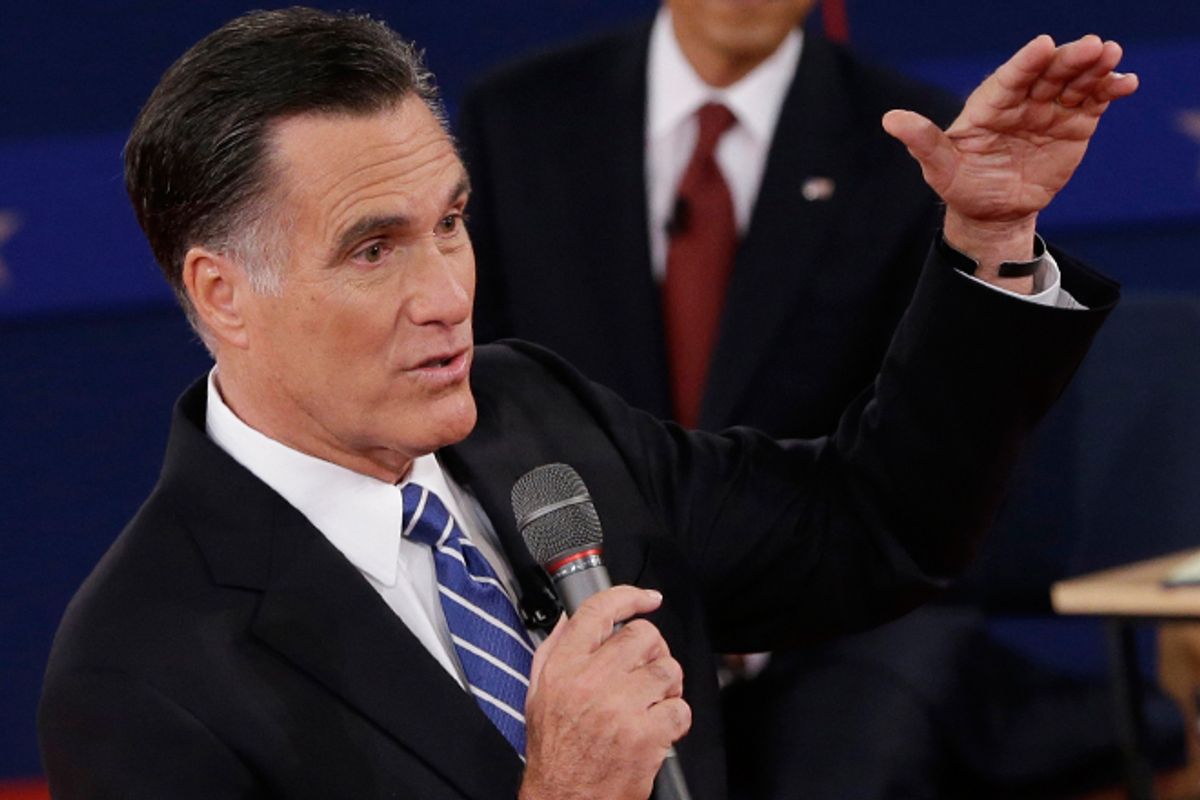 Why did Mitt Romney embarrass himself on Libya in this week’s debate? One possibility: Because he, and the Republican Party in general, have opened up an alarming policy deficit between themselves and Barack Obama and the Democrats.

What I mean by that is that Romney, Republicans and conservatives have, in case after case, simply given up on crafting viable public policy. That wasn’t always the case. When Ronald Reagan took office, conservative think tanks were ready with a host of ideas for transforming what government did and the way it did it. As recently as the 2000 campaign, George W. Bush campaigned on, for example, No Child Left Behind and a faith-based initiative. Does Romney have anything similar he’s talking about during this campaign? Not that I’ve heard.

What he’s substituted for policy is scandal, on the one hand, and symbolism, on the other.

Republicans' reliance on a scandal framework is most obvious in their attacks on Barack Obama. The stimulus is reduced in this point of view to “Solyndra.” Energy? One pipeline to Canada.

Most of the time, there’s almost no real attempt to construct an argument against actual policies, to treat government programs proposed by the president as policies that one might agree or disagree with. That’s not always true – a lot of the arguments against the Affordable Care Act, and some of the case against the stimulus, really were policy-based. But more often Republicans have tried to frame their attacks around scandal.

The other frame they’ve used, especially on foreign policy and national security, is pure symbolism. Often, as Paul Waldman pointed out this week, that’s reduced down to the level of individual words. It’s bad to apologize. It’s important to speak up for Iranian protesters.

It’s imperative to never, ever disagree with Israel. And Waldman missed the big one: It’s absolutely critical that the president always, always, no matter what, and in every possible way, refer to the United States as “exceptional.” Don’t forget: Many of the present generation of Republicans were trained by Newt Gingrich and Frank Luntz to believe in the power of certain words. They may sincerely believe that public policy really does only consist of finding the words that will “force” opponents to fear them and allies to be comforted.

And so, scandal and symbolism became a trap that turned the disaster in Benghazi from an opportunity to score points for Mitt Romney into a fiasco.

How? First, because instead of questioning the policies – including the initial intervention – that brought the Obama administration to the death of an ambassador, the immediate instinct of the Romney Republicans was to turn it into scandal. A coverup! Barack Obama and the State Department said one thing in the immediate aftermath, but some of those things turned out to be wrong. Now, a less scandal-obsessed party might have either moved quickly past that seemingly unimportant discrepancy and focused on how the problem happened in the first place, or investigated whether initial chaos was a sign of mismanagement. But neither of those fits the scandal frame as well.

Meanwhile, the focus on symbolic words in lieu of policy played right into the scandal frame in this case. The administration was denying terrorism! Because, er, they didn’t use the word “terrorist.” Sure, they said “act of terror,” which to most of us sounds about the same, but that’s because most of us aren’t obsessively focused on the symbolic importance of using the correct words all the time as the main responsibility of the president with regard to foreign policy and national security.

Most of us, that is, who are not trapped within the conservative closed information feedback loop, where Solyndra and Fast and Furious were major Obama administration scandals, and where, as Paul Ryan put it in his debate with Joe Biden, it’s obvious that Obama’s foreign policy is unraveling “before our eyes” and “as we turn on our television screens these days.”

Of course, figuring out what any of that really means would take, well, some serious policy analysis. But that’s exactly what Mitt Romney and the Republicans just don’t have these days.

But at least they know they shouldn’t apologize for it!