Green Party candidate Jill Stein: "90 million people have no one to vote for"

Jill Stein says the president is "Etch-a-sketching" as much as Romney, even on women's issues and the environment 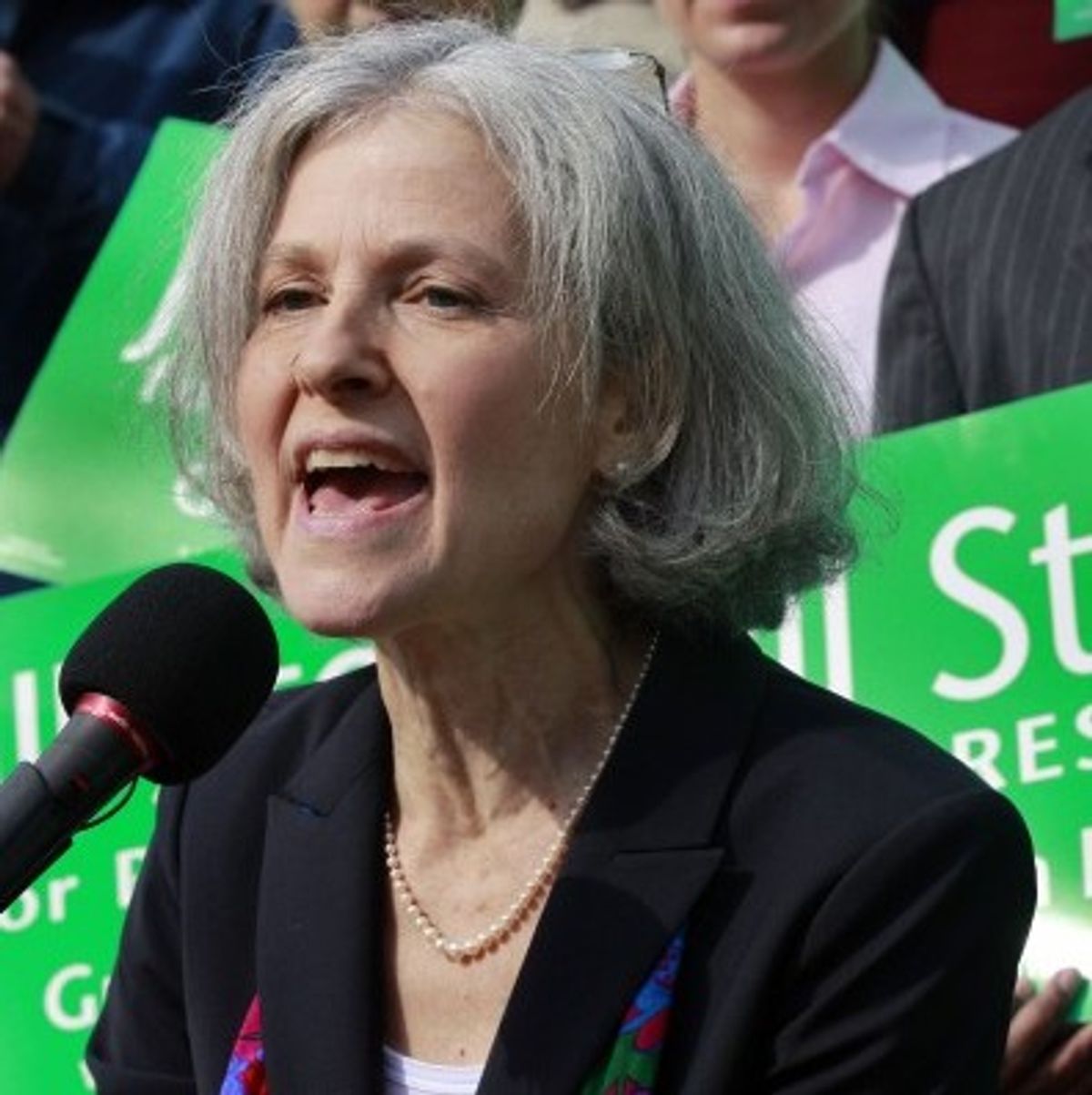 Dr. Jill Stein, the Green Party's nominee for president was arrested this week when she and her running mate, protesting their exclusion from the presidential debate, attempted to enter the hall at Hofstra University where Barack Obama and Mitt Romney were about to face off. "We weren’t sure what the consequences would be, but we were determined to clarify that it wasn’t just third-party candidates but the voters who were being locked out," Stein told Salon. "will be on the ballots for 85 percent of potential voters, and those voters deserve to know what their choices are."

Stein, a Harvard-trained physician, spoke to Salon yesterday afternoon about the state of our two-party democracy, the need for open, inclusive debates, and why she's running for president.

You got yourself arrested outside the presidential debate this week. What was your goal in trying to get into Hofstra?

We were simply trying to go in and take it as far as we could, to demand an open and inclusive debate. It’s about not accepting this mockery of our democracy. Right now we have this catch-22 that potentially limits voter choice to candidates sponsored by the deep pockets of Wall Street and the fossil fuel and health insurance industries, and all those usual suspects that are pushing us over the cliff. [Obama and Romney] are the only ones who are going to meet the criteria of the Commission on Presidential Debates, but we now know that the criteria are manufactured in order to limit participation.

What are voters missing out on?

Americans deserve to hear about the free trade agreements that are truly responsible for are high unemployment rates, and continued offshoring of jobs and undermining of our wages; about the generation of students who are locked into debt, and in fact that Washington is now bailing out, via the Fed, the banks for the fourth time, effectively; about Medicare-for-all, which is the only way that we get to a true health care for everyone as a human right, which also happens to save us trillions over the next decade. It can save us as much in fact as the austerity package in the Budget Control Act of 2011. So you know there are real solutions that can actually solve our problems that will not be mentioned in this fake debate.

The two main candidates offer more of the same, including drill baby drill on steroids; the policies of George W. Bush are very much alive and well in the agenda of Barack Obama, and we saw that in full view in the president’s competition with Romney for who can build more miles of pipeline and catapult us into climate change faster. It’s an absolute outrage that the debate did not include the fact that we can create three times as many jobs in the green economy. The Green New Deal, which is what we’re calling for, can put an end to climate change and at the same time we can put an end to unemployment.

You don't think of Barack Obama as much different from Romney?

You know, the talk is much nicer from the Democrats. But it’s very important to remember that old saying, “Fool me once, shame on you, fool me twice, shame on me.” We’ve heard this talk before. And if you’re voting on the talk, and not looking at the walk, you know it would be very easy to be fooled. But there is a track record now, and it’s very important to look at that record, at the policies. And you see that there’s not very much difference.

On women’s rights for example, there’s a lot made right now of the fact that Romney talked about binders full of women, and Obama talked about the Lily Ledbetter law. That's a wonderful law, but it hasn’t made much difference, because it’s not really being enforced. It’s easy to sign a law, but where have we gotten? Women are falling into poverty in record numbers -- 40 percent of women-headed households now. Obama failed to raise the minimum wage. He hasn’t even talked about the sub-minimum wage, which is where so many women find themselves employed.

It’s not just Romney who’s shaking the etch-a-sketch. Obama’s is too, and is hoping you don’t notice.

If you look at the exit polls, which show in fact what happened on the ground, the fact is that Nader drew equally from Democrats and Republicans, and the vast majority --  there was a CNN exit poll if you want to check them -- the vast majority of the votes came from Ross Perot voters who were independent and would not have otherwise voted because they didn’t have anyone to vote for. That’s why 90 million people right now don’t have anybody to vote for. So they can spin it that it was Nader, but in fact it was the Supreme Court. And in fact, far more Democrats basically left the Democratic Party to vote for Bush, defected for Bush, then Nader’s entire vote count. So it’s a preposterous argument if you actually look at it.

There's no excuse for telling people to just be patient and wait for the failed policies of Democrats and Republicans. People are at the breaking point. We’re going to turn that breaking point into a tipping point. And we are having the one right now with our campaign. There are so many disenfranchised voters who are staying home now. Not the least of them are the 36 million students and recent graduates who are indentured servants to student debt under the policy of Barack Obama and Mitt Romney. Being an indentured servant is no future at all. And imagine what would happen if word goes viral among the 36 million students in a 90 million-voter race it became three-way race, when 36 million is more than enough to win that race. We’re not holding our breath, but we’re not ruling it out either. We could be at our strongest moment, and if we’re not there now, we will be soon. So we are here to win this race to win it, but just as much as winning on Election Day, it's about reclaiming our political voice. So it is a win-win, no matter how you cut it, by voting green in this election.