Why President Romney would let down the right 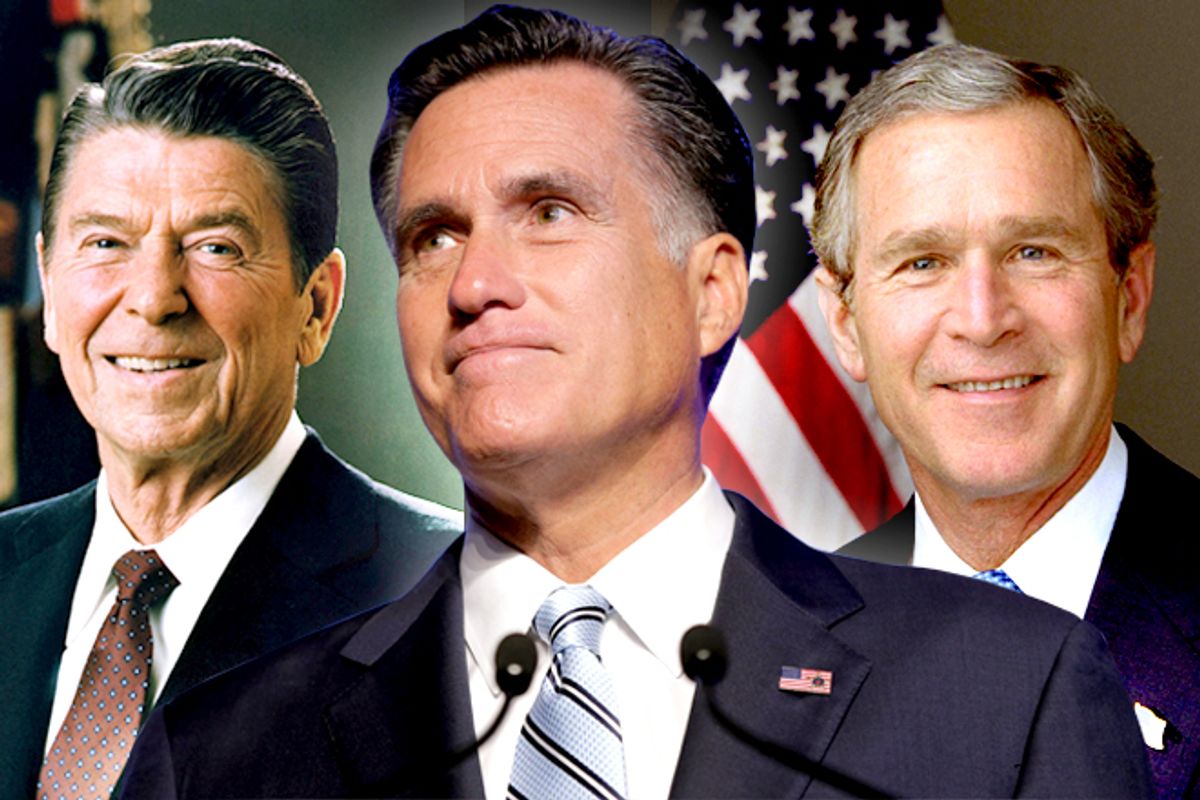 If Mitt Romney wins election, what will he actually do?  The right hopes -- and the left fears -- that he'll join with congressional Republicans to roll back the federal government, undo the social contract, and unshackle the "genius" of the American free-enterprise system, launching nothing less than a Romney Revolution.

It's not going to happen.

Victory will bring Romney no end of troubles. The expectations of his fired-up supporters will be sky-high, and Republicans in Washington will be even less willing to compromise on their "bold" (i.e., radical) ideas. But President Romney would face real obstacles from Day One -- just like every Republican president since Ronald Reagan.  The sizable budget deficit will compel action even as it  limits the president's running room. The same congressional gridlock that has bogged down President Obama will confront Romney, only this time with the Democrats as the obstructionists.

Those are structural and political barriers. Romney will face a fundamental policy challenge, too: The government programs that he and running mate Paul Ryan most want to overhaul, Medicare and Social Security, are immensely popular with the American people.

So Romney will quickly find himself hemmed in. But he shouldn't take it personally. After all, the same thing happened to Ronald Reagan.

When Reagan unseated Jimmy Carter in 1980, many conservatives hoped a new era was dawning.  There was talk of a “Reagan Revolution,” a clear and decisive shift to the right. To be sure, some of their hopes were fulfilled. In 1981, the administration pushed through Congress a historic tax cut that dramatically reduced rates and imposed fiscal handcuffs on Congress. Reagan also pushed through important deregulations that diminished the role of the federal government in various parts of the economy.

But Reagan quickly found out that government was hard to change. And as a smart politician, he figured out that to be an effective president he would have to disappoint many of the key factions in his constituency, such as social conservatives, who discovered that he didn’t plan on lending much support to proposals they were calling for such as an amendment to ban abortion and prayer in school.  When he tried to make bold policy moves, he was often rebuffed. In 1981 and 1982, the administration pushed for some cuts in Social Security benefits. Speaker Tip O’Neill, a Democrat, fought back and helped foster so much pressure that the White House backed down. Other than fixing its finances in 1983, Reagan would not try to touch the program again. He also had trouble achieving the kinds of cuts in the federal budget that he set out to accomplish. Indeed, the number of federal employees grew under Reagan's watch, and the deficit more than doubled during his time in office.

So the Reagan Revolution left many of its revolutionaries disappointed.

The challenges Reagan faced in the White House made it clear to conservatives, especially those who had been around since the Nixon and Ford administrations, such as Donald Rumsfeld and Richard Cheney, the importance of new strategies for conservative governance — many of which would likely be employed under Romney. These conservative insiders put many of these into effect under President George W. Bush and their strategies would offer an appealing precedent to the next Republican president.

Bush learned from Reagan the importance of bureaucratic warfare. Like Reagan, Bush tried to staff many key agencies with people who were not very sympathetic to the programs they were heading. Reagan’s Assistant Secretary of Housing and Urban Development Emanuel Savas used his time at work to write a book called "Privatizing the Public Sector: How to Shrink Government."

The Bush White House also made use of judicial appointments, carefully vetting candidates and making sure that appointees were receptive to a more conservative agenda. The long-term strategy paid off as many federal courts were filled with justices who have given less than favorable hearings to liberal policies.

Finally, Bush made extensive use of executive power. Like Reagan, he often found that the best way to get around Congress and popular programs was to use the power of the presidency.  He gutted clean water standards through executive orders and used signing statements to circumvent the intentions of Congress. Sometimes President Bush used his power to limit agencies that differed with his agenda. Eric Schaeffer, who directed the EPA Office of Regulatory Enforcement, complained he was “fighting a White House that seems determined to weaken the rules we are trying to enforce.”

Bush, like Reagan, was hemmed in and did not accomplish all his goals.  He tried to privatize Social Security but under pressure had to beat a hasty retreat. He talked about small government and conservative economics but, as with all presidents since Reagan, the federal budget continued to grow and Bush saddled the country with huge deficits.

It is never clear what will happen when someone takes over the White House. As a former CEO, Romney is likely to find a tactic like the use of executive authority very appealing as president. But the history of the two presidents who were closest to the conservative movement suggests that a Romney Revolution would be difficult to achieve — even as the Republican Party has moved to the right.

When conservatives have occupied the seats of power since the 1980s they have been forced to inherit the programs that they opposed on the campaign trail and make significant compromises. Romney might be determined to dismantle Obama’s healthcare programs, but chances are he will find himself moving forth with its implementation. And as soon as he takes office, he would need to start considering the 2016 election and the need to win the same moderate voters and swing states that he is searching for now, just as George H.W. Bush accepted a tax increase before 1992 and Bill Clinton shifted to the center on domestic policy before 1996.

This is not to say that it doesn’t matter who wins. Reagan and Bush achieved many historic changes, including legislation like tax cuts and the weakening of many agencies that did change the direction of American politics and regulation. Romney, too, could leave a lasting legacy through conservative judiciary appointments and limiting growth of federal programs. But given the deficit, the gridlock and the ongoing popularity and institutional resilience of government programs, the battles are likely to be fought within the existing system rather than a radical overhaul. Romney’s opponents need to stay focused on the tools of conservative governance — from bureaucratic warfare to judicial appointments to the expansion of executive power — that Washington insiders on the right have honed and developed since the days of Reagan.

Meg Jacobs teaches history at MIT. She's working on a book about the 1970s energy crisis.