No debate on climate change 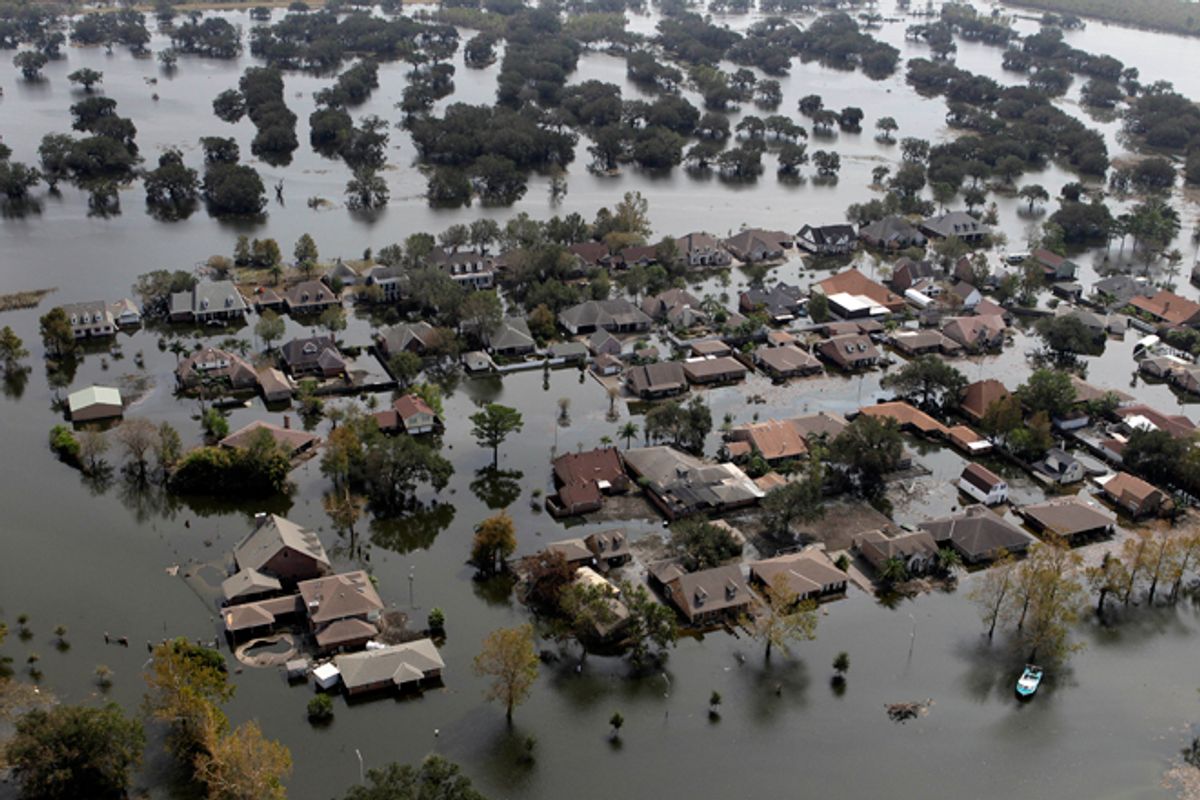 Flooded homes in the aftermath of Hurricane Isaac (AP/Gerald Herbert)
--

"Climate change" -- the words that dare not be spoken when candidates for the presidency of the richest and most powerful nation in the world meet in the storm and clamor of a debate. That's been true for the first two meetings between Barack Obama and Mitt Romney, and it will most likely continue to be the same sad story again in Monday night's foreign policy-focused debate.

But it shouldn't be. The latest reason why comes from Europe, in the form of a 274-page report on the cost and frequency of extreme weather events in North America, courtesy of the giant resinsurance company Munich Re. The short version: Across the entire globe, North America is experiencing the most marked increase in both the number of extreme events and their price tag.

Reinsurance companies serve as the backstop to the insurance companies that sell protection to individuals and businesses. As such, they stand to lose big from proliferating weather-related catastrophes, a fact that prompts them to ignore ideological positions on global warming and focus relentlessly on the data. For years, companies like Munich Re have been warning that man-made climate change is going to cost humanity a lot of money. Floods, droughts and really bad thunderstorms? They're going to get worse. They already are.

In the climate skeptic camp, it's long been popular to blame the higher dollar figures for weather-disaster events on growing urbanization and urban sprawl. But the Munich Re report controls for such changes:

...[T]he study now provides new evidence for the emerging impact of climate change. For thunderstorm-related losses the analysis reveals increasing volatility and a significant long-term upward trend in the normalized figures over the last 40 years. These figures have been adjusted to account for factors such as increasing values, population growth and inflation. A detailed analysis of the time series indicates that the observed changes closely match the pattern of change in meteorological conditions necessary for the formation of large thunderstorm cells. Thus it is quite probable that changing climate conditions are the drivers. The climatic changes detected are in line with the modelled changes due to human-made climate change.

"In all likelihood, we have to regard this finding as an initial climate-change footprint in our US loss data from the last four decades," said Peter Höppe, the head of Munich Re’s Geo Risks Research unit. "Previously, there had not been such a strong chain of evidence. If the first effects of climate change are already perceptible, all alerts and measures against it have become even more pressing.”

But for Obama and Romney, the most important fossil fuel issue in the last debate was the question of which man supported the coal industry most fervently. So don't hold your breath waiting for a spirited discussion of the fate of the planet in the final debate.